The Value of Force-on-Force Training 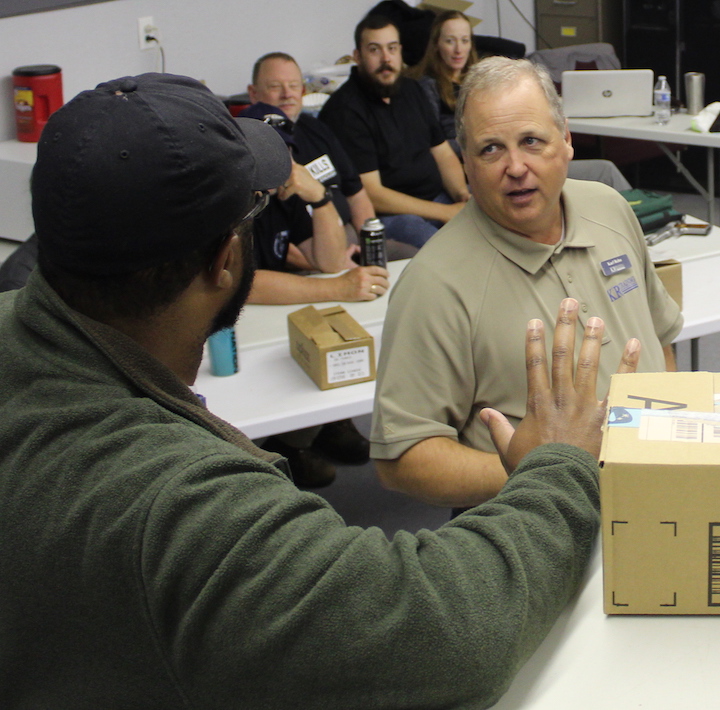 I participated in my first force-on-force training as a trainee police officer back in 1977. I was just starting my law enforcement career and had been selected to be a reserve deputy with the Kootenai County (ID) Sheriff’s Department. To teach the trainees proper traffic stop protocols, we role-played making traffic stops. This was valuable training, because the traffic stop was one of the most frequent law enforcement jobs and there was nothing except the role-play training to teach the trainee how to properly make traffic stops.

After a couple of years of working as a young police officer, I was hired out of state and attended the Spokane (WA) Police Academy, where during the training, I participated in several additional force-on-force training scenarios addressing domestic violence, more traffic stops, felony traffic stops and building searches. Again, I received valuable training, preparing me to face these difficult and dangerous policing activities while on the street. 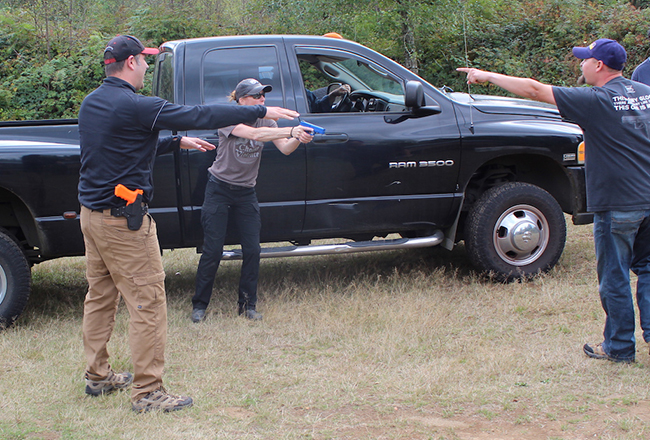 My first private sector experience of force-on-force was in 1990, when I participated as an assistant instructor for Massad Ayoob and his Lethal Force Institute advanced training. It was after this experience that I decided that I needed to add this valuable training to my fledgling curriculum for my own training school, The Firearms Academy of Seattle, and so I began to devise force-on-force elements for my own classes. Since then, we have been offering different role-play scenarios during our classes, and making the scenarios more realistic and tailored for the armed citizen with each passing year.

Fast forward to the present day. This summer, I scheduled my friend and colleague, Karl Rehn to fly in from Texas and present a two-day Tactical Scenarios course at my training school in Washington State. In this class, Karl successfully presented his version of force-on-force training to 16 of our Firearms Academy advanced students, running each student through 20+ scenarios in which they participated as either the armed citizen(s), as bad guy robbers or as other nefarious dudes or dudettes. In each scenario the students either participated in or observed incidents consisting of several components and roles that changed with each iteration of the scenario.

If you are a Network member and have never participated in this type of training, I would like to explain the value of doing so, because I am convinced that value applies both tactically and legally.

Photos [Above, Left]: Rearranging classroom tables and using shipping boxes as props gives Karl Rehn the setting to act out a store scenario with a student while the rest of the class observes.

Successfully participating in these training scenarios gives the armed citizen valuable experience handling possible violent encounters. I remember being on duty once and watching a bank entrance, waiting for a potential armed robbery, as there was an active robber working the area where I was a patrolman. I also was going to college, studying communications and preparing to give my first public speech. I was terrified of having to give this speech in front of my classmates. I remember thinking to myself that I would rather arrest this particular armed robber, because I had experience during training to know how to handle these types of events, than give this 3-minute speech. That was one of my first experiences showing me the value of force-on-force training. 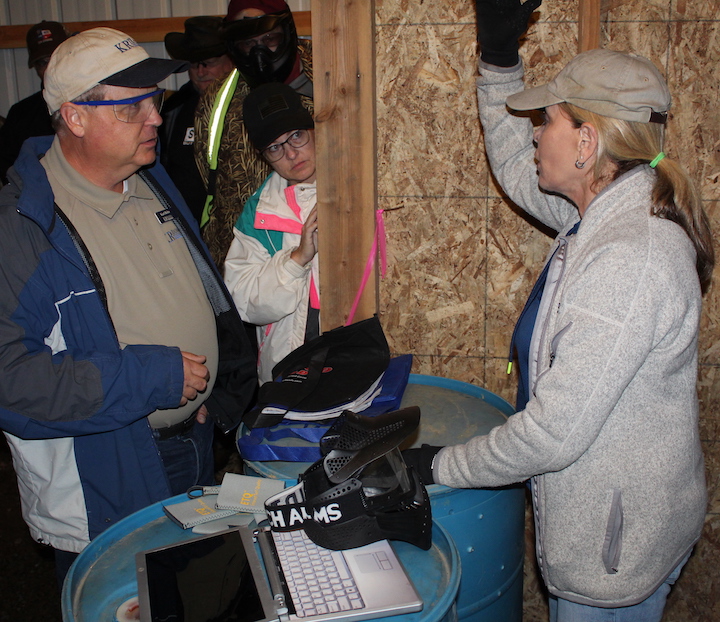 When we at FAS put on this type of scenario training, we have selected one particular lesson we want the student to learn and then run each student through the scenario, de-briefing individually. Karl has a different approach, with each student fully participating or observing each scenario. He keeps the same scenario running for a dozen or so iterations (like a robbery at a 7-11 store) and simply changes the story line. 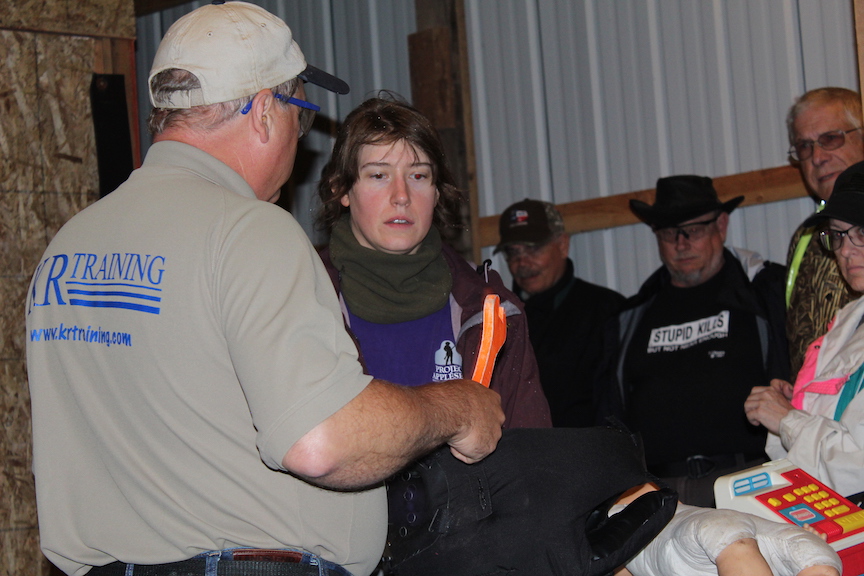 Both styles of training are valid and valuable. The first style does a better job of teaching to a particular problem (like not being victimized in a particular scenario), versus the second where you can observe and participate in more scenarios. Either style of tactical training will go a long way towards preparing the armed citizen to face these types of scenarios. We want our students to be able to say to themselves, “I have been here before, and know what to do” if caught up in a similar real-life situation.

Photos [Above, Left]: There’s an art to giving feedback, and in the same way, a skilled force-on-force instructor can coach the student in ways to improve the outcome of a scenario. Here, Rehn discusses a student’s decisions during a scenario.

Photos [Above, Right]: Rehn has the right teaching props to add realism to a training scenario. Here he role-plays actions of a possible attacker who is armed with a wrench.

Let’s assume for a moment, that your use of force in a defense situation is being questioned in a court of law. You will have the right to tell the jury what you did and why, and likely will have to give that testimony in a legitimate self-defense legal defense. But the jury will also know that your testimony will be self-serving. Will they believe you?

What if you were able to call to court fine, upstanding members of your community, perhaps a doctor, lawyer and business man who were fellow students in a force-on-force class who would testify that they took a class with you, where a virtually identical scenario was presented, and in that training they responded the same way you did in real life? They will be very credible witnesses, and it will likely result in their credibility transferring to you in front of the jury. Additionally, it is likely that your instructor will be able to testify to what they taught you and why. While they will not be able to tell the jury that they think you were justified–it is the role of the jury to decide whether or not you were justified–it will be clear that if they could say that, they would.

More so, having this training in your background, and then having your competent legal defense team sharing this information with the prosecution could go towards the prosecution realizing that they have a losing case, encouraging them to drop it before trial.

Not all force on force training is equal. In fact, you should choose your instructors wisely. It is one thing to attend a shooting class, and if that instructor is a loser, then you dismiss the training and find a better instructor.

Taking that loser’s class will likely not come up in court, unless you want it to. But because force-on-force training can be so vital for your legal defense, and because finding a good force-on force class is not the easiest thing to accomplish, you should choose wisely. Before signing up, do your due diligence and research that class. I can unequivocally recommend Karl Rehn’s training, as I can Craig Douglas’ training. I have also heard good things about John Benner’s TDI training. But there is a void in the industry for this type of training. (Hint: nature abhors a vacuum).

If you do not have a local recommendation or do not have the money to travel, consider sponsoring one of the traveling trainers who do this. As sponsor, you may get your training for free, and make a new, life-long friend. In general, seek instructors with law enforcement experience. What better person to testify for you at trial than a member of the local constabulary, or at least a former, honorably retired law enforcement officer? Instructors with legal education or who have worked as use of force experts and have testified are another good option. I am reminded of the case of Larry Hickey, who was able to call his CCW instructor who was also a local police sergeant as a material witness. 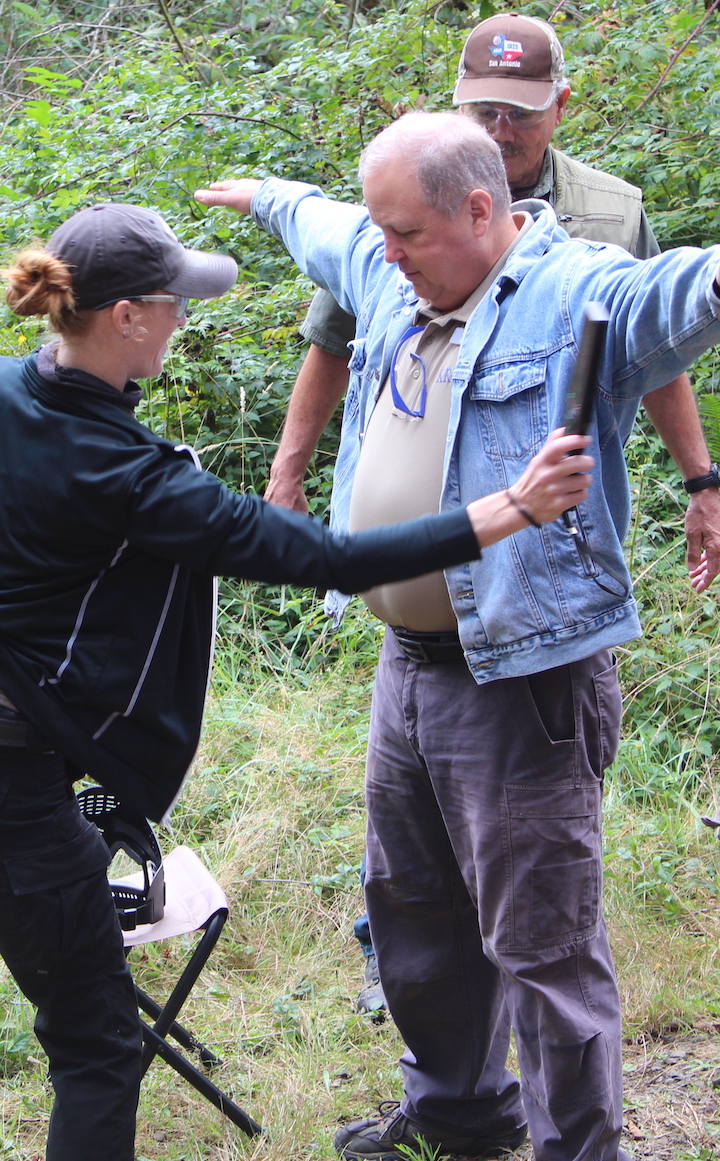 Some of our readers will be asking, “What is needed to put on force-on-force training?” You will need a venue, preferably one that replicates indoor scenarios, or can be reasonably made to do so. You will also need safety equipment, especially if you use one of the projectile-based non-lethal training guns, such as Airsoft® or Simunitions®. Karl uses both in his classes, along with simply acting out incidents using dummy guns. If you use Airsoft® or Simunitions®, you must wear the protective masks and other clothing recommended by those manufacturers.

I recently traveled to Gunsite and participated in their Ballistic Response to Active Violent Encounters and was surprised but not disappointed that they simply used blue dummy guns. It did not take away from the experience, and certainly reduced the logistics and safety issues.

Another new training device to come on the market recently is the CoolFire dryfire training system. I saw these at the NRA meeting last May and got my hands on one to try. They are a replacement barrel and magazine, which when charged with CO2, will cycle the gun just like you were shooting it live. It gives off a noise so others in the scenario know you are shooting and emits a red laser pulse to show where you would have hit. The CoolFire system was designed to give competitive shooters a way to replicate the recoil of the pistol when dryfiring for practice. We found it very useful during the force-on-force exercises. Our staff was so taken by the system, that after the class many ordered one for themselves.

To sum up this discussion, please understand that force-on-force training is a critical aspect of being an armed citizen who is both tactically ready to defend themselves or others and also able to make the best legal argument, if needed, for why self-defense actions were necessary. Seek out a class near you, or if there is none, then consider contacting Karl Rehn, Craig Douglas or another top instructor and invite them to come to you.

Photo: My school uses metal detector wands prior to bringing students into force on force scenarios as an added layer of safety to prevent inadvertent introduction of a real weapon into the scenario.
_________

About Karl Rehn: Karl is a long-time Network affiliated instructor. He joined the Network within only a month of our inauguration. Prior to that, we knew Karl as a professional associate in the world of firearms instruction, where he has offered classes since 1991. His personal training résumé shows over 2,400 hours of training from more than 70 of the nation’s top schools. In addition to operating KR Training in Austin, TX, he worked for 33 years as engineering manager at a university research lab, as well as developing curriculum, going on to teach and supervise the teaching of the Department of Homeland Security’s training for emergency responders all over the U.S. Get to know Karl through his blog at http://blog.krtraining.com and consider training with him, too. His classes are listed at https://www.krtraining.com/schedule.html and advanced registration is a must with many selling out before class day ever rolls around.