Network member Mike T. has shouldered range safety officer responsibilities at the Georgia DNR shooting range he belongs to and he’s doing what he can to draw range members’ attention to the importance of safe gun handling–with special focus on youthful range members. Instead of relying on the standard range sign listing the Four Universal Gun Safety Rules, he has broken the rules into separate plaques which are presented by seasonal characters. With Halloween looming, this month’s presenters are a trio of ghosts.

The picture Mike sent of his safety display at the range was a great reminder that much of what we do to learn and practice armed self-defense skills, we do for those we love. That fact contains several facets. The first, on which Mike is scoring big points, is preparing young shooters to carry forward our armed lifestyle proving that with proper precautions, deadly weapons fill a very necessary personal defense role without posing a danger to innocent people. This is glaringly absent in the anti-gun diatribes to which we are regularly subjected through popular media. 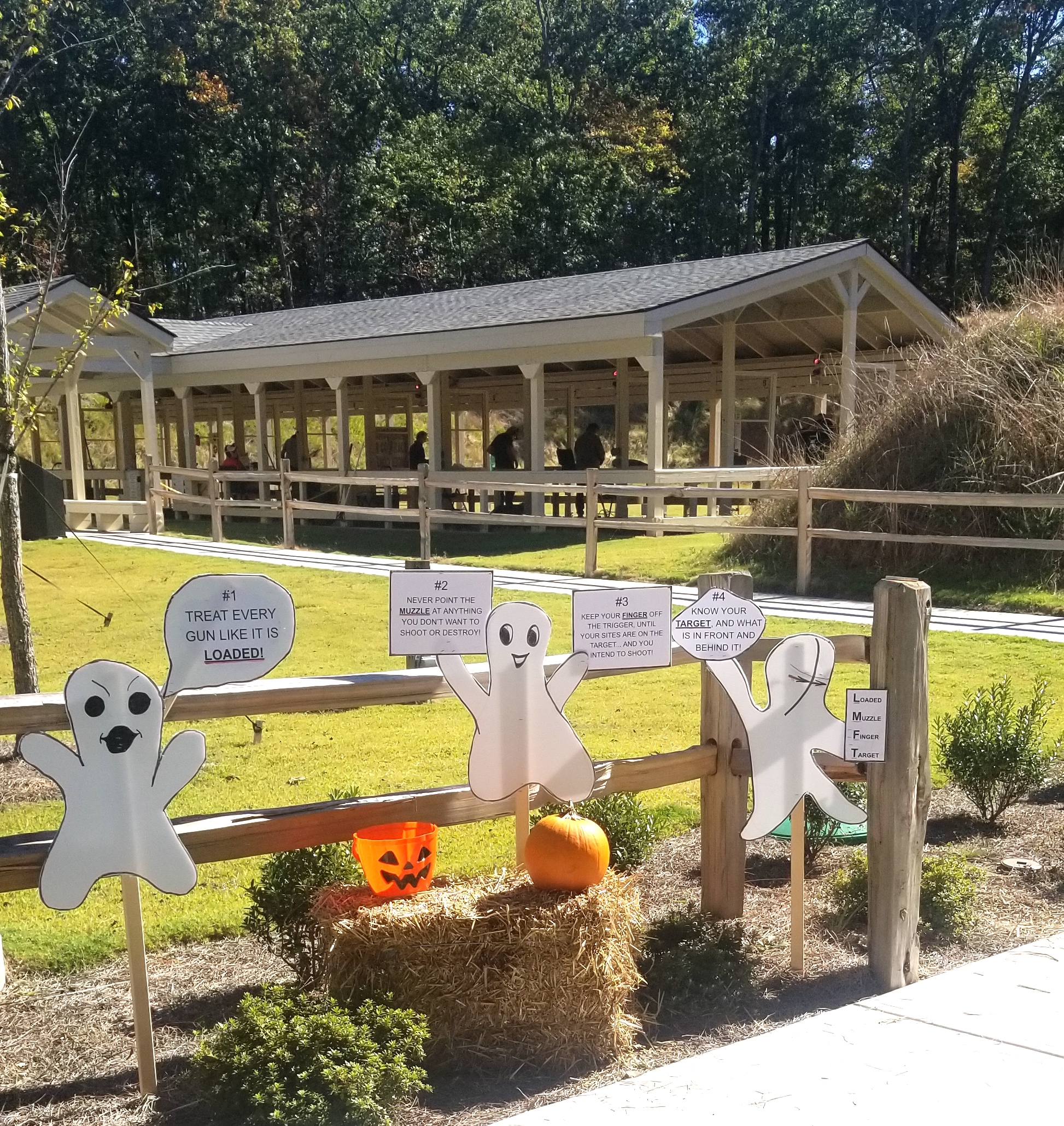 Mike’s outreach got me to thinking about how armed citizens present our reasons for owning guns to society at large. Sometimes the seriousness underlying self-defense preparation morphs into gloom and doom that eclipses why we develop and maintain our defense skills. While we acknowledge the deadly serious aspect of firearms ownership for self defense, it isn’t the guns and skill in gun use that we love. It is the people we love for whom we learn and practice our defense firearms skills. This we do to help keep them safe and to remain safe ourselves so we can participate in their lives.

Earlier this month I enjoyed a long phone chat with a member who was weighing whether carrying a gun in his extremely anti-self-defense state was worth the risk. Our member told me that he also participates in a competitor’s prepaid legal services contract and as a part of their program he periodically receives videos about the devastating legal aftermath of use of force.

I have visited and corresponded with this member in the past and I know him to be a well-educated, thoughtful and ethics-driven citizen who has the misfortunate to dwell in a very restrictive state. He has owned guns and taught his family about safe firearms use and self defense for several decades. Our member and his wife have gone to the considerable effort to obtain their state’s carry licenses and are serious and responsible armed citizens. Despite that, when I spoke with him, he had become so worried about the legal system’s abuse of armed citizens who have used guns in self defense that he was seriously questioning his long-standing decision to have and carry guns to defend against falling victim to the whims of a violent criminal.

Society, he observed, favors violent criminals and punishes law-abiding citizens who defend themselves. I was stunned by the fearful, emotional state stimulated by the reports he had been watching. How, I wondered, had this intelligent, ethical man been driven to ask in complete seriousness whether possessing the ability to prevent violent crime against himself and his loved ones was worthwhile?

I was horrified that his choice boiled down to the risk of social and legal consequences after defending against a violent criminal weighed against dying or being injured by a violent sociopath, unable to stop an attack if he had chosen to give up the ability to put up an effective defense. As he was talking, my mind flashed to the 2007 deaths of a CT doctor’s wife and two daughters that Tom Givens discussed in his June 2019 interview in this journal.

With the story of that family’s tragedy foremost in my mind, I was compelled to ask, as gently as I could, whether it is better to live carefully and responsibly but still keep a gun available for defense against unavoidable risks that breach our precautions, or if it was preferable to give up the gun and risk being raped and murdered, carjacked, seriously injured in an assault or to watch helplessly while the same was done to one’s wife and daughters, as was the fate of the CT doctor that Tom Givens had talked about last summer.

It seemed a most unfair question! Realizing the seriousness with which the gentleman was considering giving up his means of defense, I felt enormous regret for the way the self-defense industry raises awareness of the need for self-defense skills and stirs up fear as motivation for purchase of books and classes. Even some of our competitor’s support plans that exist to help cope with the legal aftermath sell through fear mongering. They are very skilled at eliciting an emotional response. Creating a highly emotional need is great salesmanship but it is seriously detrimental to the long-term well-being of armed citizens because in its emotionally-charged approach, it bypasses and fails to engage the logical, analytical part of the brain that weighs the options and decides on the best long-term solution for the individual and those in their care.

Living with awareness creates issues that the head-in-the-sand crowd doesn’t experience! The biggest challenge, I think, is balance. We each have our own blind spots! For the self-defense practitioner, one common set of opposing demands is remaining well-prepared without letting the study and practice overwhelm the better joys of family, health, faith and accomplishments in other areas of life. I believe the same applies to selling post-self-defense support. At the Network, we want our member to choose to be part of this family of like-minded citizens out of logical choice, not out of fear.