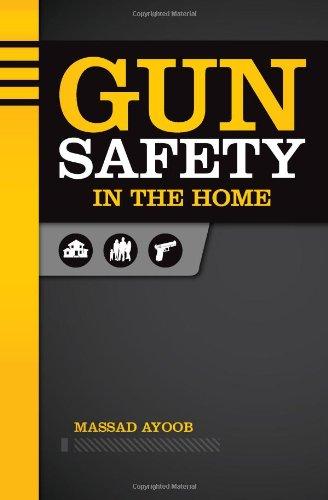 Last spring at the NRA Convention, the Network’s booth hosted book signings for our friend and Advisory Board member Massad Ayoob, among several other authors. The book Ayoob signed was Gun Safety In the Home, graciously provided by the publisher, Gun Digest Books.

When the dust cleared, all that remained were empty book boxes and one damaged copy, which the bindery had mistakenly sliced in half, amputating the right side of the pages, but preserving the binding. “That’s your condensed copy,” Ayoob joked, “it won’t take you long to read it.” While his quip might have just been a little joke between two old friends, the truth is that Gun Safety In the Home IS a small, condensed lesson in living safety in an armed household.

In this book’s condensed presentation is its strength: there are many in the gun-owning community who do not feel driven to spend the days and weeks in training and practice that many of our Network members do. How, then, do we older, more experienced members of armed citizenry mentor and coach these less serious gun owners in gun safety, possibly the single most pivotal factor on which gun rights hinge? This book demonstrates how: We trim out all the superfluous opinion, all the peripheral arguments, all the wishful thinking, and provide a bare-bones instructional manual for living safely with guns. This small and affordable book is that manual.

Ayoob introduces gun safety by noting that applying common sense to firearms is a bit like keeping hands and fingers away from lawnmower and power tool blades and like other power tools, it’s necessary to take care to only “puncture and destroy the right things and not the wrong things.”

While the industry uses terms like Universal Gun Safety Rules, Ayoob explains that the tremendous variations in mechanical operation present between handguns, rifles and shotguns break down even further into the different operating systems represented in each of those categories. Bravely tackling the subject, he heads this title Gun-Specific Safety Rules, to focus the beginner’s attention on the fact that acceptable procedures with a modern semi-automatic pistol may not be safe with, for example, a lever action rifle. He teaches the reader safe operation of shotguns, rifles and handguns, including handgun holstering procedures.

Intelligent adults deserve more than a few brusquely worded mandates so Ayoob provides the rationale behind gun safety rules, illustrated both with photographs and by vignettes that underscore why these safety precautions are vital. Sometimes the little word picture gives the history of the problem the rule solves; other times a photograph or several pages of text explains why a particular manual of arms or other operating procedure is essential.

Sometimes a fitting story is told. Toward the latter half of the book Ayoob details a rifle accident that killed a frontier lawman’s camp cook, not only to show how accidents can occur when experienced shooters handle deadly weapons, but also to demonstrate the terrible results of allowing the muzzle to stray away from a safe direction. He also explains inertia discharges in showing how accidents can occur, as well as detailing mechanical or design failures, including the once infamous case head separations in “a particular brand of gun which had a barrel that did not fully support the chamber at the bottom of the rear,” he writes tactfully. He closes this segment noting that these kinds of catastrophic failures are quite rare, so while they make the headlines, they are in actuality very infrequent in comparison to the innumerable pulls of the trigger that do not end in catastrophe.

More likely is intentional criminal use of a gun to which the shooter should never have had access. Addressing storage of firearms, Ayoob opines that there are two categories. The first he calls “Simple Storage,” noting that “the target shooter’s pistol, the outdoorsman’s revolver, the hunter’s rifle or shotgun” will be stored in this manner because none require immediate access in an emergency situation. A good quality safe makes sense for “Simple Storage,” he explains, because there is no need to quickly put your hands on any of these firearms, but a great necessity to prevent access by “irresponsible youngsters, equally irresponsible adults, and assorted burglars and other evildoers who might break into your home with hostile intent.”

The opposite, Ayoob continues, is “Defensive-Ready Storage” for loaded guns that may be required quickly for defense of self, home and family. He discusses biometric lock boxes and so-called Smart Guns, identifying the weak points in both. Listing problems with off body storage, he concludes that a gun carried securely on body is the most efficient method of Defensive-Ready Storage, and backs up the assertion citing several infamous home intrusions resulting in murders of entire families.

Protecting the family means keeping bad guys out, but also keeping children from accessing the gun the adults keep to protect them, Ayoob writes, introducing his third chapter. “Child psychologists tell us that children crave two things they don’t yet have: power and responsibility,” he explains. In modern culture, he asserts, the gun represents both, so it is understandable that kids will ferret out a gun the parent believes hidden where “no one” will uncover it. The solution, and one Ayoob has long advocated, is “gun proofing” your kids by not making the erroneous assumption that you can prevent your children from ever having access to a firearm. He explains how he managed gun safety as a father, as well as reviewing the NRA’s highly successful Eddie Eagle child gun safety program and its history.

Accidental shooting deaths, especially those involving children, fuel many anti-gun campaigns. Ayoob discusses accident prevention measures, opining that simply outlawing a tool or a behavior is ineffective. He outlines the history of the terms “negligent discharge” and “accidental discharge,” and tells the stories of legal cases on which he has provided expert testimony to show the importance of not assuming that all gun accidents are caused by negligence.

He asserts that truly accidental shootings are not due to the negligence of the person holding the gun, explaining equipment and other factors that can cause accidents, as well as some of the legal issues in play when an accident must be explained. Trigger pull weight is covered thoroughly, as many of the cases cited occurred when a double action revolver was cocked then discharged in single action. He defines reasonable trigger pull weights for various pistols and the peril of modifing a trigger so the pressure required to fire the gun is substantially less than the manufacturer designed.

Ayoob explains how an armed citizen who justifiably shoots an assailant may be accused of accidently firing to undermine the defense of self defense. After all, a charge of manslaughter due to “recklessness and negligence,” he explains, is easier to prosecute and win than proving an intentional act of murder. He explains the legal principles at work and how to protect the defense of self defense from allegations that a necessary act of self defense was an accident rooted in carelessness. Issues like trigger pull weight give traction to such allegations, he writes, whether from a prosecutor looking for a conviction of manslaughter or a plaintiff’s attorney attempting to get money from a homeowners or automobile insurance policy that will cover an accident but not intentional acts undertaken in self defense.

Other stories illustrate the necessity of securing guns where mentally ill family members cannot access them. Later in the book, he contrasts the carnage wrought by Adam Lanza with his mother’s rifle against choices made by a law enforcement officer after the officer’s father lost his capacity to reason following a stroke. Ayoob’s warning to keep guns secured unless under immediate control is a powerful part of this book. Don’t be blinded by wishful thinking that the troubled person has recovered, he urges.

Ayoob closes this little book by relating the facts of an accidental discharge he had during a shooting match some years ago. Explaining the lessons that embarrassing but non-injurious incident taught, he emphasizes the responsibility that falls on the armed citizen. It adds a nice touch of humility and reminds the reader that experts with thousands of hours of experience with firearms can still fall prey to mistakes.

The goal of those truly dedicated to gun safety is not to remove the hazard, his summary outlines, it is to put in place practices that safe and responsible people employ to prevent tragedy. Like the first syllable of the word “firearms,” Ayoob writes in his closing summary, a gun is a tool used by man to bring about results of inestimable good, but it can also cause fearsome destruction. “We have these weapons to protect ourselves and the people we most love,” he stresses. “We must never forget that they are the ones most likely to be near us…when we handle those guns…We must never drop our guard with them.”