New Network members receive nearly nine hours of video lectures in the new member package, as well as accessing most of the materials via streaming video in the member-only portion of our website. Through this training effort, the Network has created a well-prepared membership that understands the legalities of using force in self defense, what to expect in the aftermath of self defense and associated issues.

This lecture series is provided exclusively to Network members and is not sold commercially. New members receive nine video lectures and a book, which are in depth, academic lessons taught by leading instructors and legal experts. The video lectures are ready to be used as documentation of training in court, so are designed to withstand scrutiny, not to act as “info-tainment.” They are objective and reliable. The lectures are complemented by a full-length book written by Massad Ayoob.

These training materials have prepared Network members to face and counter threats. Since our first year, 2008, only 29 Network members have been involved in cases requiring assistance from the Legal Defense Fund. This low incidence of need indicates a careful, well-educated membership, and shows to value of training, and the importance of understanding the aftermath of use of force.

Join our family of well-trained, prepared armed citizens at https://armedcitizensnetwork.org/join and learn from this full-length use of force education set.

Use of Deadly Force in Self Defense

The Armed Citizens' Legal Defense Network, Inc. is the brainchild of the Network’s President, Marty Hayes, who, after founding and running a successful firearms training business (The Firearms Academy of Seattle, Inc.) for many years, began to pursue solutions to post-shooting legal issues his students and other armed citizens might face. In 2003, Hayes, who for many years had worked as an expert witness in firearms-related cases, earned a law degree. During this time, the idea of the Network was born. Upon graduation in 2007, he and two partners introduced the Network.

Hayes brings 20 years experience as a professional firearms instructor, 30 years in law enforcement and his knowledge of the legal profession both as an expert witness and his legal education to the leadership of the Network.

In this lesson he introduces:

Handling the Immediate Aftermath of a Self-Defense Shooting

Massad F. Ayoob is an internationally-known firearms and self-defense instructor. Starting in 1974 as director of the Lethal Force Institute in Concord, NH, he has taught police and civilian self-defense techniques to both law enforcement officers and private citizens worldwide. He now heads the Massad Ayoob Group, through which he continues to teach.

In Handling the Immediate Aftermath of a Self-Defense Shooting, Ayoob addresses–

Ayoob's 5 Point Post-Incident Check List addresses key danger areas, starting with his advice to establish the active dynamic, as he discusses in this excerpt.

This member education program features a discussion with attorneys James Fleming and Royce Ferguson, moderated by Network President Marty Hayes. This lesson covers a wide array of topics, including--

An Interview with Marc MacYoung by Marty Hayes

Marc MacYoung is an author, lecturer and martial artist and is considered to be one of the pioneers of reality-based self defense. This is not theoretical for MacYoung who spent his youth in situational poverty and lived with crime and violence on the streets of Los Angeles, where he was first shot when he was fourteen. He later worked as the warden of a correctional institute, bodyguard, bouncer and security professional. Initially known best for his street-violence survival books, he has also published a considerable body of work on personal safety and self defense in both books and videos.

Your ability to recognize and describe what is going on around you is imperative if you are to successfully explain to the criminal justice system why you used force to avoid being killed or crippled.

The Network is supported by an Advisory Board comprised of leaders in the firearms and self-defense field. In this program, Network President Marty Hayes, J.D. moderates a series of short interviews with Advisory Board Members, including–

Dennis Tueller explains the history and intent of his studies in the proxemics that resulted in the Tueller Principle.

Tom Givens sketches out common factors in the 52 shootings in which his students have been involved and draws many lessons.

John Farnam advises members on lifestyle and habits to avoid attracting the attention of human predators.

Massad Ayoob defines and teaches how to identify and explain furtive movements an assailant may make just before presenting a weapon to do you harm. Click read more for video clips and further details.

Dennis Tueller tells the history of what has come to be known as the Tueller Drill and why he prefers the term “Tueller Principle.” Today, this demonstration helps the trier of fact understand how quickly an aggressor can lunge from a stationary position and harm you with a contact weapon.

Taught by Massad Ayoob, who for 19 years was chairman of the Firearms Committee and Deadly Force Committee for the American Society of Law Enforcement Trainers, served for two years as co-vice chair for the Forensic Evidence Committee for the National Association of Trial Defense Lawyers, has worked in law enforcement as a sworn officer for 36 years, and has provided expert witness testimony at trial in countless use of force cases.

In this program, Ayoob explains how altered perceptions may occur, influence the armed citizen or police officer’s performance, and literally affect their survival of the encounter itself. Post incident legal survival is endangered when the survivor is ill-prepared to explain how physiological changes to the body in a near-death incident influence–

Emotional and Psychological Aftermath of a Self-Defense Shooting

This lecture is presented by Massad Ayoob, who is one of the pre-eminent fighting handgun trainers in the world. His methods of reflexive, high speed yet accurate shooting has been adopted by the U.S. Army as part of its standard pistol-training course. Former director of Lethal Force Institute, and owner/operator of the Massad Ayoob Group, he is directly responsible for training thousands in justifiable use of deadly force, safe gun use and effective defense techniques. In this lecture, he offers a frank discussion of how a lethal force incident changes the survivor.

Legal Considerations of the Use of Non-Lethal Defensive Force

This lesson was produced in conjunction with Personal Defense Network. In it, Network President Marty Hayes and PDN video series developer Rob Pincus explain that most self-defense incidents don’t involve shooting–but there are still legal ramifications that must be resolved with the police and courts. This video lecture covers non shooting defense issues including:

The practitioner must understand when and why use of force is necessary and know how to articulate those facts to authorities. Pointing a gun at another without justification would constitute the crime of assault, but doing so is justifiable to stop grave, imminent danger of death, Hayes teaches. He explains the standard of a reasonable and prudent person and the elements of ability, opportunity and jeopardy to justify the use of force in self defense. These factors will have to be explained to the police and in court along with your attacker's actions that lead you to believe your life was in danger, he emphasizes. 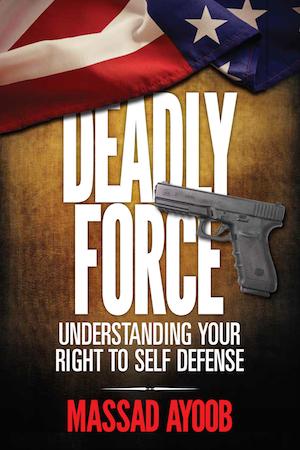