Last year at this time, I published an open letter to Wayne LaPierre, the Executive Vice President of the National Rifle Association. You can read it at https://armedcitizensnetwork.org/open-letter-to-nra and I would suggest the reader become familiar with my arguments before continuing.

Now, I return a year later with no less of a commitment to the thoughts and feelings I stated in that letter, and from the perspective of a year of business competition that has taken place. In that year, the Network has seen its greatest growth year ever, adding 3,000 new members while retaining over 80% of our current members. When I published that letter, I was accused by two NRA board members of fearing competition. They missed the point. I didn’t fear the competition, but instead was angry that an organization that I supported publicly, privately and financially would start up a business endeavor that competed against me and others who are NRA members. Now that is all history.

This year, when the Network had an exhibit at the NRA Annual Meeting in Dallas, TX, it was quite a different story. When I entered the convention hall, I was not bombarded with huge banners of Dana Loesch promoting NRA CarryGuard. Instead, the marketing was very subdued, and the only mention of NRA CarryGuard was at the NRA booth, and that contained NO mention of CarryGuard insurance. I can understand that. As most who follow these matters are aware, the NRA CarryGuard program has been under attack by the State of New York. New York has determined that the NRA CarryGuard program was being sold illegally, and fined the insurance broker, Lockton Risk $7,000,000. That is seven million. Lockton has agreed to pay, since as I understand it, that $7,000,000 fine is a negotiated settlement.

I was very curious about what had happened to the insurance product the NRA had offered, so I asked the good people at the NRA booth what was happening with CarryGuard insurance. They told me there were no representatives of the insurance program at the booth and the crew in the booth had no information for me. They told me that if I wanted to call a number they pointed out on a computer screen, I could talk to someone from the program. It is my understanding that one could not purchase CarryGuard insurance at their booth.

What was unveiled at the booth was an expanded and re-vamped training component of CarryGuard. As many members know from reading my letter to Wayne LaPierre and my follow-up open letter to the Board of Directors at https://armedcitizensnetwork.org/open-letter-to-nra-board my other concern about CarryGuard was that the NRA had begun competing directly against my training business, The Firearms Academy of Seattle, Inc. I was not concerned about losing money because of this competition, as I felt their program was doomed from the start. After seeing the re-vamped program, I still predict its demise. I remain concerned about just how much money the NRA Board of Directors is willing to allow the Executive Board to spend on a failing program. This question remains unanswered, although I suspect at some point they will put an end to it.

Having learned those facts during my time in the exhibition hall, I stayed on for an additional day after the weekend to attend the Annual Meeting of the NRA Board of Directors.

At that meeting, I learned that Lt. Col. Oliver North was to lead the NRA in the upcoming year. This was a surprise to the members attending the meeting, although not to the board members. I have always liked Col. North and I believe this was a pretty good choice. Of course, time will tell whether my belief is accurate. 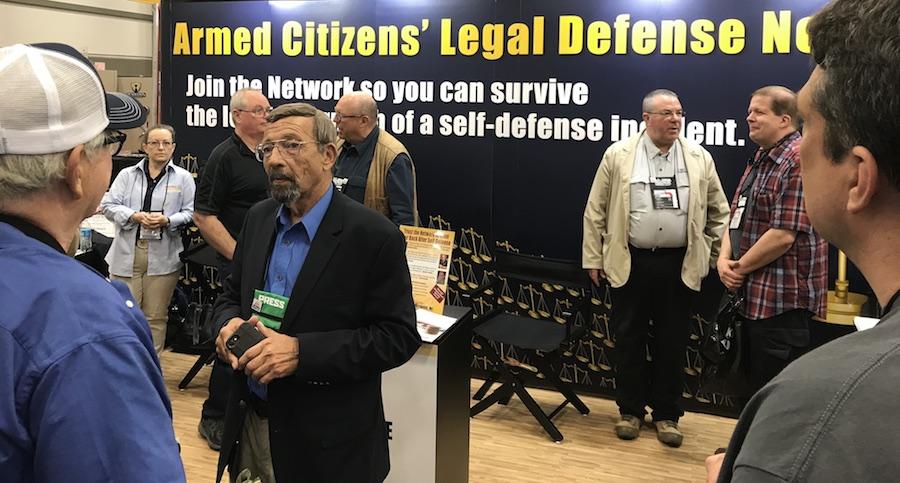 During the Board of Director’s morning session, each member of the Executive Committee stands up and gives a report. Last year, those reports stressed how the introduction of CarryGuard was intended to help “modernize the financial underpinnings of the NRA.” This year, I was looking forward to getting the straight scoop from Josh Powell, the Director of Operations, on what was happening with this program. Unfortunately, there was no discussion of CarryGuard in the public portion of the meeting, but instead, Powell’s report to the Board was reserved for an executive session.

The approximately 80 to 100 NRA members in attendance were kicked out of the board room, and for about an hour, we can only presume that CarryGuard was discussed among the board under the cloak of secrecy. The reason for the secrecy was never divulged.

What is happening with one of the Network’s major competitors? Your guess is as good as mine. Suffice it to say there is more to come. But for now, I do have some really good news to share from the 2018 NRA Annual Meeting.

According to figures stated about the attendance, more people attended this Annual Meeting than ever before. 87,254 to be exact. That is good news, and because of this robust attendance, the recruiting effort by the Network was the second best ever, only exceeded by the meeting in 2014 in Indianapolis. We were pleased with the news that the NRA AM is returning to Indy next year! We look forward to signing up many new members then.

We had a great time shaking hands with current Network members, too, and giving each one of our new pins. We gave away over 200 pins this way and they seemed to be popular amongst the members. Members, I am glad you liked them. We expect to make the lapel pins a permanent part of our outreach at public events. We are sending pins to new members when they sign up because they fit into the new member packaging without additional cost. Members, if you’re pin collectors, put a $5 bill in the mail to us (ACLD Network, PO Box 400, Onalaska, WA, 98570) and we will send you a pin. That is approximately the cost of the pin and postage cost, and as you know, we like to be fiscally responsible here at the Network, so we ask this courtesy of you.

Meeting of the Network Advisory Board 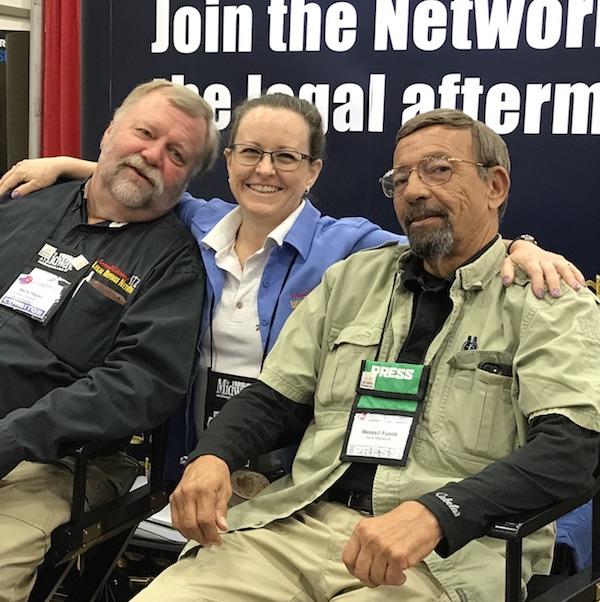 This year, we did something different for our Network Advisory Board meeting. Instead of gathering at the S.H.O.T. Show, we postponed the annual meeting of the advisory board until the NRA Annual Meeting. This worked well, and since we were at the NRA AM, one of the new things we did was set aside a time in the booth for our members to come meet our board members, chat a little and if they wanted, get a picture taken. (See photo above: On Saturday, visitors to our booth chatted with Network Advisory Board members Massad Ayoob, John Farnam and Dennis Tueller (shown) as well as Jim Fleming who had stepped out of the booth on an errand when this picture was snapped.)

We then held a dinner meeting for just the Advisory Board so we could both socialize and conduct a bit of business. Our 2018 efforts in Dallas were satisfactory and this outreach method is one we are anticipating revisiting next year, too.

Photo, right: We had a good crew. When booth traffic was slow, Network President Marty Hayes, our Membership Renewals Lead Jennie Van Tuyl and Advisory Board member Massad Ayoob had a little fun mugging for the camera.

I am no longer angry at the NRA. Business success has a way of mitigating negative feelings against a competitor, and the Network certainly has done well during the last year. To me, doing well means increasing the Legal Defense Fund so we can potentially help more members. To do that, we focus on bringing in more members who can also be educated and protected by the benefits of the Network. 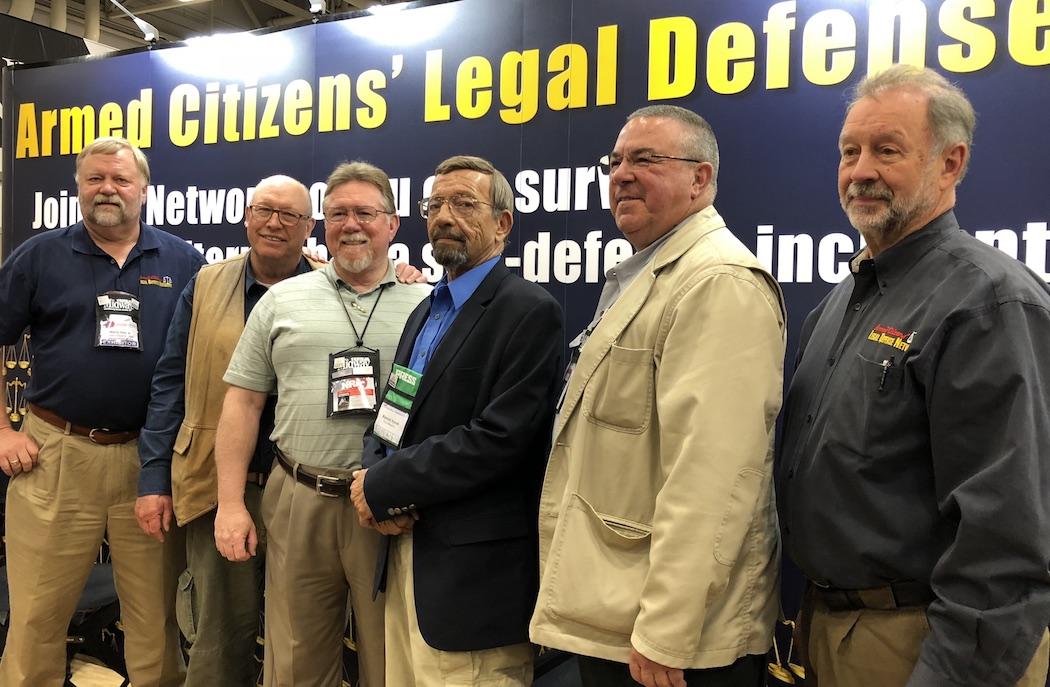 As we enter one of the most volatile periods in our history, as the pro-gun and anti-gun sides rally, posture and line-up to oppose each other at every turn, we must look to the big picture and realize that in order for our side to win this war against us, we must be united and support each other. To this end, if you are not an NRA member, please browse to https://membership.nrahq.org/forms/signup.asp?CampaignID=JoinNow and join. It is my understanding that there are close to six million NRA members at this time, which is a record. The strength of the NRA as a lobbying group does not come from the money it spends to support pro-gun candidates running for election, but instead, in its nearly six million members it can motivate come election time. We all should be a part of that number.