As my weekdays are spent working on projects with the Network, along with even answering phones when everyone else is busy on other lines, I don’t have as much time to teach classes as I once did. This means that I cultivate, train and hire good instructors who will follow the program of teaching the use of firearms for self protection that I have developed over the past 30 years. But I do occasionally teach a class to keep my hand in it, but it is more likely that I will drop in on classes and talk to the students when I can. I did this last Sunday, and I want to share that experience as this month’s President’s Message.

There were two activities occurring at the Firearms Academy of Seattle last weekend. The first was a special IDPA training event taught by IDPA  and USPSA Master Zach Campbell. The class was a small one, as he put two on the calendar this year, and this last weekend’s session coincided with another shooting event that drew potential students away from the class. Nonetheless, what I saw was a professional instructor giving it all for these students, even going overtime on the last day to make sure the four students got everything they could out of the class. What was special for me was that when I dropped in to say hi, Zach (one of the best competitors in the country and certainly in the Pacific Northwest) attributed getting his start in the shooting profession as one of my students several years ago. He said that after taking his first class, he wanted to learn more, took more classes, started competing and had gained his success as a result of starting out at FAS.

Now, I know that he put in a lot of hard work over the past several years getting to the top, but it is nice to see he remembers where he got his start. In this course, we also had two FAS staff instructors taking the class, Jennie Van Tuyl (who works for the Network during the day and teaches and competes on the weekends) and our newest instructor, Erik Knise. Erik just got his start three years ago and joined the staff of FAS this year. Any school that is going to survive after its founder moves on has to recruit and train the younger generation to succeed him. This is what I have done with both Jennie and Erik, along with a couple more young-uns. I was able to observe Erik attaining the IDPA Master Class rating, shooting his best classifier ever after the three days of training. Fun stuff. In the photo below: Erik Knise, left, congratulated by instructor Zach Campbell. 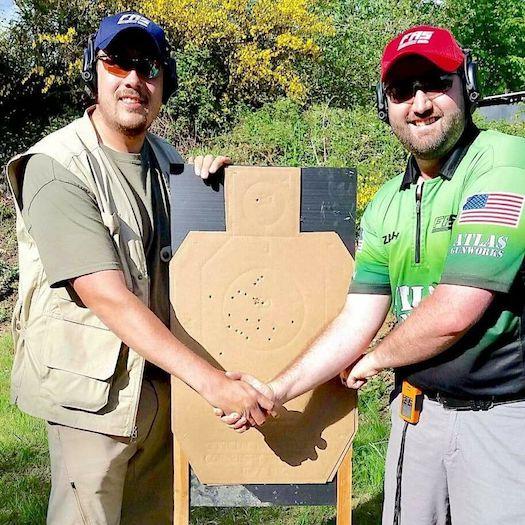 I next dropped in on the Defensive Handgun class, taught by our senior staff instructor Rick Bressler and another youngster, Brian Yip. The class consisted of nine hard chargers, wide-eyed and full of energy and the desire to learn. I spent about 20 minutes discussing FAS and the Network and answering questions. What particularly struck me was comments one of the students made in private. He had a couple of legal questions to talk about, then he thanked me for building FAS, saying that what we are doing touches lives. Sometimes when you are in the middle of the class working your behind off to make sure the students “get it,” you forget occasionally that teaching is more than work. It is a passion and a calling. Like in so many other helping professions, a professional instructor not only teaches to make a living (or at least augment their day job, as very few firearms instructors actually make a full-time living teaching) but they do it because they like helping people. They like touching lives.

I guess it also applies to the Network, because I know the work we do here also touches lives, both for the members who have used our assistance after a self-defense incident, but also those being educated every day by the effort of our educational outreach. I have been told more than once that a member sleeps a little better because they joined the Network. And, at the end of the day, that kind of makes the work we do here all worthwhile.