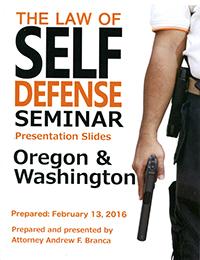 The Law of Self Defense
By Andrew Branca

Last month, I attended a seminar that I’ve wanted for a long time. After an unsuccessful effort to attend one last fall, I kept my calendar clear for February the 13th and with several close buddies, left home before the sun rose to drive to Portland, OR to attend Andrew Branca’s Law of Self Defense seminar. It was worth the wait!

Nearly two decades earlier, I’d learned a lot from Branca’s book of The Law of Self Defense. After its second edition was published in 2013, he began traveling the nation teaching the application of the book’s principles to the various states’ laws. It seems like a daunting undertaking, but as class started Branca told us that about 80% of self-defense law “is standard, but it is the 20% that will make the difference between you defending yourself and committing a crime.”

Branca explained the rules of self defense as defined by Oregon and Washington statutory law, plus the court decisions comprising case law and self-defense jury instructions from each state’s courts. The seminar’s goal is “minimizing your legal vulnerability,” not to figure out how to “game the system,” he emphasized.

Humorously illustrating sources of “bad self-defense law” information that influence wrong decisions, Branca explained that reading statutory law is insufficient. “Statutes should best be understood as the legislature’s intent; what they would like to see happen,” he explained, adding, “It is not unusual for the court to apply the statute differently than a plain English reading might suggest, so it is very dangerous to rely simply on reading of the statute. I suggest you don’t really know what that statute means in the real world without studying the case law. Until the laws are interpreted and applied by courts to real people, they don’t mean anything,” he added, remarking, “You have to be prepared for what the authorities CAN do to you, not what they may do.”

Laws regulating self defense are also clarified by state jury instructions, and defending your actions is further influenced by factors like standards of evidence, who is required to produce that evidence, and criminal court procedures, as well. Branca supported this detailed instruction with both WA and OR case law, showing what the prosecution is required to produce to support charges and what the defendant must show to prove self defense. It’s too detailed for inclusion in this review, and besides, it varies a little from one state to the next, but suffice it to say, he thoroughly proved the absurdity of the claim, if it’s a “good shoot,” there’s nothing to worry about. Almost all claims of self defense the criminal justice system sees come from criminals trying to escape liability and they fail on the burden of production, he explained. “Without enough evidence, the jury will never hear the words ‘self defense’ in the trial,” he warned.

Instead of getting buried in such confusing details, Branca clarifies what you must prove by distilling five key components of a successful self-defense argument, or as he terms it, “narrative.” A prosecutor, deciding whether or not to charge you with a crime, is trying to compose a “story of guilt” that contains more building blocks than your narrative of innocence. “Remember,” he stressed, “if even one of these is disproven beyond a reasonable doubt, your claim of self defense collapses.” If you’ve read Branca’s book, or earlier interviews with us in this journal (http://armedcitizensnetwork.org/lessons-in-the-law-of-self-defense), you already know those five elements. The seminar put considerable emphasis on them, too, with students calling out the five elements on cue:
Innocence
Imminence
Proportionality
Avoidance
Reasonableness

Analyzing the key element of innocence, Branca cited state law requiring that the person claiming self defense must not have been the “aggressor or provoker” of the fight. Willing participants in mutual combat can regain innocence if they clearly withdraw. “Communicate loudly, ‘I don’t want to fight any more,’ and create evidence of genuine and good faith withdrawal,” taking care to show clearly that you are not re-engaging, he advised. He told of a client, accosted by a stranger who thought he was someone else. Unfortunately, after breaking off contact, the client needed to walk in the same direction as the aggressor and it was misinterpreted as re-starting the fight.

Next, Branca outlined, the threat must be imminent. Self-defense actions must not come too soon, but avoiding harm necessitates not acting too late. The question will be: was there an imminent threat? He cited Massad Ayoob’s classic instruction on Ability, Opportunity and Jeopardy, calling it a valuable cognitive and tactical tool for quickly assessing the situation and later articulating your reasonable perception of imminent threat. These principles were studied through considerations including distance and obstacles, display of a weapon to deter further aggression and justification for threatening deadly force.

Intensity of the violence and its duration are factors in determining the proportionality of your defensive response, Branca continued, as are disparity of size and physical ability to fight back. In addition, although statutory law may state that deadly force is allowed to stop the commission of a felony, now that many minor crimes are felonies, in reality that is only applicable “when the felony includes a threat against a person,” Branca explained.

The principles of imminence and proportionality overlap when a threat is indeed imminent, but has not risen to the level of deadly force. Branca illustrated, “he is angry, approaching and you are just scared.” Having a non-deadly force option accommodates proportionate defenses to stop the aggression while remaining legal, he recommended. “Carry at least one tool beyond the gun. You are five times more likely to face simple assault than aggravated assault,” he urged, citing FBI statistics.

Great misunderstanding has arisen around Stand Your Ground laws in recent years, and these take center stage as Branca teaches the principle of avoidance. He cites 34 states with SYG laws; 17 have statutory language that retreat is not required; another 17 have never imposed a legal duty to retreat. 16 states, however, do have a duty to retreat. He cited the OR Supreme Court’s 1982 ruling in State v. Charles to illustrate the Oregon standard on retreat (do so, unless the threat is immediate). WA case law, in contrast identifies the right to use only the amount of force necessary or reasonable to defend against attack when you are in a place where you have a right to be (State v. Williams, WA Ct. App. 1996). He later commented, “I am a strong proponent of Stand Your Ground as sound public policy, but in reality, whenever it can be done safely, you should retreat, retreat, retreat!”

The final principle is reasonableness, and of all five, it seems the least easily defined. It’s subjective, Branca told students, in that you must show a good faith belief you needed to use the force you did to avoid harm. On the other hand, it is objective, because the question will be asked, “Would a reasonable and prudent person assess and respond as you did?” Also affecting this aspect of the self-defense claim are unavoidable mistakes like being threatened with a realistic-looking toy gun. Other factors include specialized knowledge, illustrated by the Tueller principle, for which he displayed a brief video illustrating how distance affects self-defense decisions.

Additional concerns discussed included defense of others, defense of property and dwellings, interaction with 9-1-1 and responding police, and self-defense immunity laws. He wrapped up his presentation by drawing out tactical applications to the principles of law he taught in the foregoing hours. Get good skills training, continue to study self-defense law and weigh the results of use of deadly force in self defense “before you have your finger on the trigger,” he urged.

Branca is a skilled public speaker who keeps the student audience engaged with a multi-media presentation, real life examples, question and answer sessions, all the while keeping to a tight schedule and making every minute in the seminar worthwhile. The in-person seminar presentation is hard to beat, but he also has online training at http://lawofselfdefense.com/online-training/ for CO, FL, NC, OH, OK, OR, TN, TX, VA and WA. Live seminars are listed by state at http://lawofselfdefense.com/classes-and-events/ and if he doesn’t have one scheduled for your state, ask if you can host a seminar. At a minimum, get and read his book, The Law of Self Defense http://lawofselfdefense.com/product/the-law-of-self-defense-2nd-edition/ and add Branca’s instruction to the rest of your aftermath protection efforts.

Click here to return to March 2016 Journal to read more.