It has been a very interesting month here at the Network, at least for me. That is because this past month has been all about Washington state politics. Something that most of the Network members (except for the Washington members) did not realize until this message, is that the Network has been working with WA state Senator Lynda Wilson http://lyndawilson.src.wastateleg.org/ to get a bill passed in Washington to create an exemption for self-defense legal subscription programs (that is what they call us) from the clutches from the Washington State Insurance Commissioner.

You see, after 11 years, somehow our offering memberships in Washington became an issue for the insurance commissioner, and he decided to investigate us, alleging that we’re selling insurance without a license (what they call a Certificate of Authority) and that we were insuring criminal acts. In April, when we first received a notice of investigation, we tried to explain to them that we were not doing what they alleged, but they failed to understand and have been holding us under their thumb for nine months. We had hoped to have the whole affair behind us long ago, but for whatever reason, they keep dragging it out. A few months ago, we were in conversation with Sen. Wilson, and she explained how we might be able to get legislation passed that provided relief from the insurance commissioner, so we worked on putting together a bill to do just that. The bill can be viewed at this link http://lawfilesext.leg.wa.gov/biennium/2019-20/Pdf/Bills/Senate%20Bills/6043.pdf?q=20200131055826.

Yesterday we got our first chance to pursue passage of the bill, when we gave testimony in the WA Senate Law and Justice Committee. That hearing can be viewed at https://www.tvw.org/watch/?eventID=2020011373. The video is very long, and our part does not come until the end, but we did get the chance to give our argument for why the bill should become law. If you want to watch the 20-minute hearing, our bill comes up for discussion at the 1 hour and 24 minute (1:24) mark on the video. What you will see first is the Senate Law and Justice staffer giving her view as to what the bill means. That report does not quite hit the mark, but it is close. Next, Sen. Wilson gives her reasons for sponsoring the bill. I then give about four minutes of prepared testimony about the Network, followed by two of our Network members, Dr. Dan Rybicki and Jonathan Clemens. They both gave compelling testimony as to why the Network is important and why they support this bill.

Photo, above right: Our Network members giving their testimony to the WA Senate Law and Justice Committee. I’m sitting on the left, Dr. Rybicki is in the center, and Jonathan Clemens is to the far right.

We were also joined at the hearing by eight additional Network members who signed in to lend their support for the bill. I am very grateful for each member's willingness to take the time out of their lives to show the committee that Washington citizens support the Network and this bill.

The question on everyone’s mind is this: what chance do we have to get the legislation passed? I don’t know, but given the fact that a very small number of bills put forward ever actually become law, I don’t give it very good odds. The bill has to be voted out of committee, put on the Senate floor for a vote, and then if it passes the Senate, it goes over to the House for the same action. On the other hand, we have the House bill going through the same process, so who knows? Finally, if it passes both chambers, it still has to be signed into law by our governor. 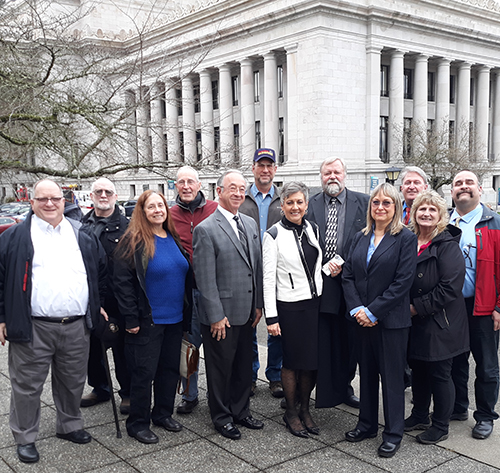 What I do know is that it feels good to be fighting this fight, because if there is one thing that I have consistently done many times in my life, is to stand on a principle for a just cause and not back down. At times, it has cost me professionally, but I wouldn’t change anything.

We have another hearing of the same type in the House of Representatives this coming week. It is scheduled for Feb. 5, at 1:30 p.m. in hearing room D, in the O’Brien Building. If any Washington member can attend the hearing, I think they will enjoy being a part of the legislative process and we will appreciate your show of support, too.

We have a couple more weeks of the political drama to get through, and I will be busy with the second quarter of this game. I want to express a sincere thank-you to all the Network members who wrote to their representatives and members of the Senate Law and Justice committee to voice their support for the bill. Thank you, Network members who attended the hearing, with an extra measure of gratitude to Dr. Rybicki and Mr. Clemens for their public testimony. I know that testifying is not easy. And lastly, a big thank you to Sen. Wilson for her unwavering support of the Network and her work in getting us this far.