Concealed Carry Class
The ABCs of Self-Defense Tools and Tactics

Tom Givens, our advisory board member and a well-known popular armed defense instructor, distills his teachings on mindset, personal protection, and the armed lifestyle in a new Gun Digest book, just out in January. As a fan of Tom’s practical assessment of and responses to violent crime faced by citizens of all ages, genders and walks of life, I am happy to see his instruction for those going armed compiled in an easy-to-read format that serves as a great refresher for old hands and a compelling introduction for those new to firearms. 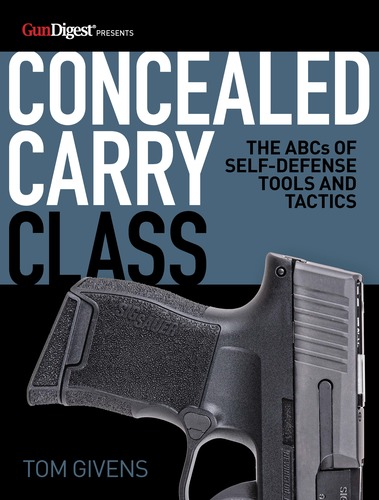 Givens opens with a quick review of national crime statistics, touching on workplace violence and the need to be armed at church. He moves quickly into legal concerns, giving a nice and sincerely appreciated recommendation for the Network. The chapters, 30 in all, are short and easy to read.

Givens’ chapter on Appropriate Use of Force defines the circumstances under which force used in self defense is justifiable, giving examples of ability, intent, imminent jeopardy, and preclusion and how each fit into justification to use force in self defense. Givens comments that students frequently ask the wrong question: “Can I shoot him if...?” explaining that the better question would be “Do I have to shoot him?”

Identifying the common interest in guns and gear over mindset and attitude, Givens elaborates on seven key principles originally taught by Jeff Cooper in his treatise Principals of Personal Defense. Readers will greatly benefit by his commentary on each and to fuel reader interest, here’s a brief synopsis:

Alertness: “If you know who is around you and what they are up to, you are in control.”

Decisiveness: “Always do something, immediately.”

Aggressiveness: “If I have to defend my life with a firearm, I will use it vigorously, with all the violence, aggressiveness and commitment I can muster, because my life is at stake!”

Speed: “You must also develop a quickness in your ability to assess developing situations and make sound decisions.”

Coolness: “All shooters experience a degradation of skill under the extreme stress involved in a real life-and-death shooting confrontation. The more skill you have, however, the less you will lose when placed under sudden stress.”

Ruthlessness: “Absolute single-mindedness of purpose... Hit him fast, hit him hard, hit him with everything you have, and then assess and if needed, hit him some more.”

Surprise: Use a page from the bad guy’s playbook. You are likely smarter and better trained, but if he can catch you by surprise, he holds advantage. Turn the tables, Givens advises, “If attacked do something he does not expect. Action is faster than reaction. Make him react to you, not you to him you. You accomplish this by doing what he least expects, which is a violent, explosive counterattack.” He illustrates application of the seven principles through the OODA loop sequence of observe, orient, decide and act.

Because there exist “people who are not normal, rational, socialized or civilized” it is difficult for many to recognize and react in time to a predator, Givens elaborates, defining mental states through which one should shift, depending on conditions. Jeff Cooper applied color codes to each state, and most of our readers are familiar with his system. The correct state of mind is important! Givens stresses, “I can say without reservation that the system saved my life on several occasions. Not what kind of gun I had, or the brand of ammo, but this mental system.”

In the next chapter, Givens discusses fear, observing, “Courage under fire is not a matter of being without fear. It is a matter of being able to control fear, accomplish your mission, which is to stay alive.” Admit that you’re afraid, but before dwelling on failure, take control–combat breathing is a good tool–and focus on getting the job done. Always have alternatives, turn anger into motivation, and accept the element of fate, he advises.

Techniques for mental conditioning make up the next chapter. “If you have been programed through training to respond correctly, you will. Panic is simply the lack of a pre-programmed response,” Givens introduces. Read newspaper crime reports, ponder what the victim should have detected, and if you were that victim how you would react. This programs your subconscious to avoid behavior that makes you a victim and gives you practice every “single day in making tactical decisions.”

In his next chapter, he offers a variety of mental exercises to increase awareness and speed up tactical decision-making. There is, Givens comments wryly, a difference between vision and observation. He discusses gathering intel for personal safety, stressing, “Make no mistake, the law-abiding populace of this country is at war with the criminal subculture, and the gathering of accurate intelligence on the enemy’s identity, location and strength is a vital part of your overall defensive strategy.” He aims to increase reader ability “To recognize subtle danger signs that will be present prior to an assault.”

Givens recommends rules of engagement “thought out, verbalized and firmly planted in your mind in advance” to aid proper use-of-force decisions that must be made at the speed required in real life. This is sometimes referred to as a premade decision and identifies the conditions under which you would use lethal force. “Make a commitment that you will fire only as a desperate measure to terminate a threat to your own life, or the life of an innocent third-party.”

Later, in discussing the aftermath of a self-defense shooting. Givens notes common psychological after-effects. He states that one who carries a gun for self defense must make a full commitment to self preservation. “In advance, long before you actually carry a gun, you must work out your own personal rules of engagement. You must be confident in, and comfortable with, your decision not to let some scumbag take your life away from you...To carry a gun responsibly, you must recognize that you might have to use it, unhesitatingly, immediately to terminate a deadly threat to your own life or that of a loved one.”

Givens dedicates several chapters to equipment: gun options, holsters for concealed carry, defense ammunition and stopping power. His chapter on gun safety and responsibility starts with the comment that he investigated 200 negligent shootings and only one genuine gun accident during his law enforcement career.

Even with a mechanical malfunction, no one should be killed or injured if the person handling the gun is keeping it pointed in a safe direction, he explains. If someone is harmed, the cause is negligent disregard of the four cardinal rules of gun safety. Those rules must “become literally part of our character...adhered to at all times in all places, without exception.”

While this book’s chapters focus on the various aspects of armed self defense, interspersed throughout the book are one-page informational discussions that range from religion and self defense to the dangers of being taken to a secondary crime scene. Those “briefs” give the reader a nice break and provide vital information in small segments.

Shooting techniques, holster work, proactive and emergency reloads, ready positions, low-light work and competition all get a chapter. Givens outlines realistic and effective practice plans, including a discussion of practicing drills applicable to real-life scenarios. He is a proponent of photorealistic targets depicting a human assailant, “to help create the correct response at the subconscious level.” For simple scored targets, anatomically correct scoring rings, like the IALEFI-Q, get his nod.

Explaining that tactics is a huge topic demanding an entire book, Givens hits the high points of use of cover, movement, distance, and other vital principles in a brief chapter. Build a practice plan around specific, measurable, attainable, realistic and timely (S.M.A.R.T.) training goals to maintain and increase skills between formal training, his next chapter advises. He provides specific recommendations for formal training, as well as resources ranging from blogs to DVDs. He closes with a variety of drills for practice and skill evaluation.

I thoroughly enjoyed the refresher Tom Givens’ Concealed Carry Class provided. It is a good asset to any shooter’s library. Get it, read it, share it.