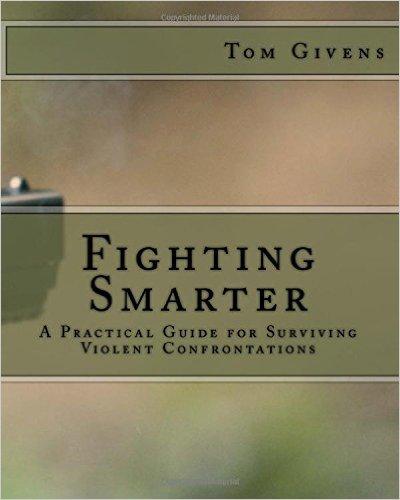 One of the first books I reviewed for this journal back in 2008 was an earlier edition of Tom Givens’ Fighting Smarter. It was an impressive instructional tome that made a difference in my thinking on personal defense. Givens has now rewritten, updated and revised Fighting Smarter, and it is even better this time around.

By way of introduction, Givens comments that there are many, many books about shooting, but “darn few about fighting with a gun to save your life or that of a loved one.” His impressive bona fides to teach this topic include 25 years work in law enforcement and specialized security, nearly 20 years teaching the art to a diverse student body. Of those thousands of students, he cites 60 who have applied what he taught them to save their lives, so, he notes, “We have a lot of feedback on and validation of our training techniques.”

In keeping with the introduction’s promise to keep the focus on how to fight, the book is broken into two sections with the first 19 chapters committed to mindset, or as Givens puts it, “software.” Thereafter, he addresses hardware–equipment selection and shooting technique. The first chapter addresses the very real threat to personal safety present in modern life. To restate these facts here would be preaching to the choir. His second chapter addresses legalities, including his preference for concealed carry over open carry. The higher standard to which the armed citizen is held is acknowledged, and he gives a much-appreciated endorsement of the Network and its member benefits. This chapter ends with excellent advice on the necessary judgment, restraint and tolerance required of the armed citizen, recommending avoiding intoxicants, keeping your pistol a secret, ignoring minor provocations, keeping ID and carry license easily at hand, and these he follows with illustrative “what if” scenarios.

Justifications for use of deadly force are the focus of the next chapter. In it, Givens outlines factors contributing to what will be objectively judged as reasonable use of force, illustrating ability, intent, imminent jeopardy and preclusion. After discussing each element, Givens concludes that while many ask, “When can I shoot him?” that is the wrong question. Instead, ask, “Do I have to shoot him?” he urges.

Fighting Smarter’s next chapter uses the seven principles of personal defense Col. Jeff Cooper spelled out in his small handbook of that title. To these key principles, Givens adds explanations and illustrations drawn from modern realities. Cooper’s color codes of awareness receive the same illumination in the following chapter. “There is a sliding scale of readiness, going from a state of being oblivious and unprepared to a condition of being ready to instantly do lethal violence if forced,” Givens introduces. The normal person faces “enormous difficulties” in generating that response, he continues, accounting that the first challenge is recognizing the presence of the predator, “realizing, internalizing and accepting” that another person intends to kill you and overcoming inhibitions to killing a fellow human.

These mindset factors are rarely discussed so frankly and with the clarity that Givens provides in Fighting Smarter. The question of “why,” while common to victims, is inconsequential and a dangerous distraction, he asserts. Overcoming the human disinclination to kill is another stumbling block. He relates that viewing threats through Cooper’s system of shifting mental states as dictated by circumstances has saved his life, and he recommends it to readers, with commentary to help readers grasp and apply the concepts.

In his discussion of the heightened state of alertness that Cooper dubbed “Orange,” Givens explains how to assess a perceived but unconfirmed threat. “About 80% of human communication is through body language,” he writes. “Predators display subtle pre-aggression indicators, which are obvious once you learn to look for them.” Next, asking “What if?” encourages a review of possibilities and response options before action starts. This he calls “the mental preparation vital to winning the conflict.” Coupled with a predetermined “mental trigger” that initiates physical action, mental preparation is essential if one is to act with the speed needed to survive, Givens explains, adding, “Your main enemy is reaction time.”

Next, Givens discusses controlling and overcoming fear, explaining, “Panic is simply the lack of a pre-programmed response.” Preparation includes visualization, and he recommends reading crime reports and thinking through the responses an armed citizen may implement. “Very soon you will learn to recognize the behavior or activity on the part of the victim that facilitated or even precipitated the crime,” teaching yourself what to avoid. Over time, he concludes, the effort produces a database of most of the “likely forms of street crime, and…pre-programmed responses filed away in the back of your mind (the subconscious) ready for deployment if faced with a similar circumstance.”

Awareness, Givens writes, is “the most important element in your survival,” adding we must both “see” and “observe.” Only about a tenth of what we see makes it into our consciousness, he cites. The depth of instruction in this and the following chapter on developing intel about criminals cannot be encapsulated in a review, and readers are strongly advised to get Fighting Smarter and take the time to study it well.

The armed citizen needs to prioritize training and preparation to counter criminal threats. Conclusions from Givens’ own students’ shootings, discussed at length in his lecture on DVD, Lessons from the Street, are synopsized in Fighting Smarter. He emphasizes awareness, preparation and proximity. Later chapters summarize violence in the workplace and in places of worship, all with the goal of urging the reader to be always vigilant, always armed and prepared.

The chapter on post-incident management will be familiar to Network members, including advice to limit post incident communication to the barest of details about your identity, that you were attacked, locations of critical evidence, and a request for your attorney’s counsel before answering further inquiries. I appreciated Givens’ endorsement of the Network in this chapter, too.

The mental aspects of self defense consume more than one-third of Fighting Smarter. The equipment does matter, though so with Chapter 19 Givens starts to address hardware–sidearm selection, with priorities of reliability, effective caliber, hand fit and related issues discussed at length. Additional details appear toward the end of the book when Givens analyzes malfunctions in both revolvers and autoloaders. Holster design receives a similar analysis, with the recommendation to carry consistently in the same position, plus analysis of the many holster variations sold, including inside the waistband, belt holsters, appendix carry, strong side carry, ankle holsters, pocket holsters, and shoulder holsters, as well as belly bands and off-body carry.

Givens introduces ammunition choices with the simile that the ammunition is the heart of the defense system, much as the engine is the heart of an automobile. He outlines stopping power, explaining the need and means to cause sufficient damage to an attacker “that will cause him to cease his actions as quickly as possible.”

Addressing gun safety, Givens reports that in his long career, he has investigated over 200 unintended discharges, of which he characterizes only one as a true accident, resulting from mechanical failure. The rest were negligent discharges that occurred out of ignorance or carelessness. More than just a recitation of gun safety rules, this chapter explains how and why armed citizens must internalize and adhere to the four cardinal rules of gun safety. These he distills even further into muzzle discipline and trigger finger discipline, asserting that those two safeguards alone, “all by themselves will prevent most problems.”

When I finish a long book like Fighting Smarter, I like to look back to the introduction to see what the author said he set out to accomplish. In his introductory pages, Givens wrote, “I sincerely hope that this book will make you think about your personal security and how to achieve it. The mental skills involved in gun fighting are more important than the physical skills, and mental skills require personal effort, just like learning physical skills. The end result of this effort is, of course, peace of mind, which is well worth the time and effort invested.” Having read Fighting Smarter from cover to cover, I believe Givens exceeded his goal. The time spent studying and thinking about his instruction was time well spent. I highly recommend Fighting Smarter to our members.

Click here to return to December 2015 Journal to read more.