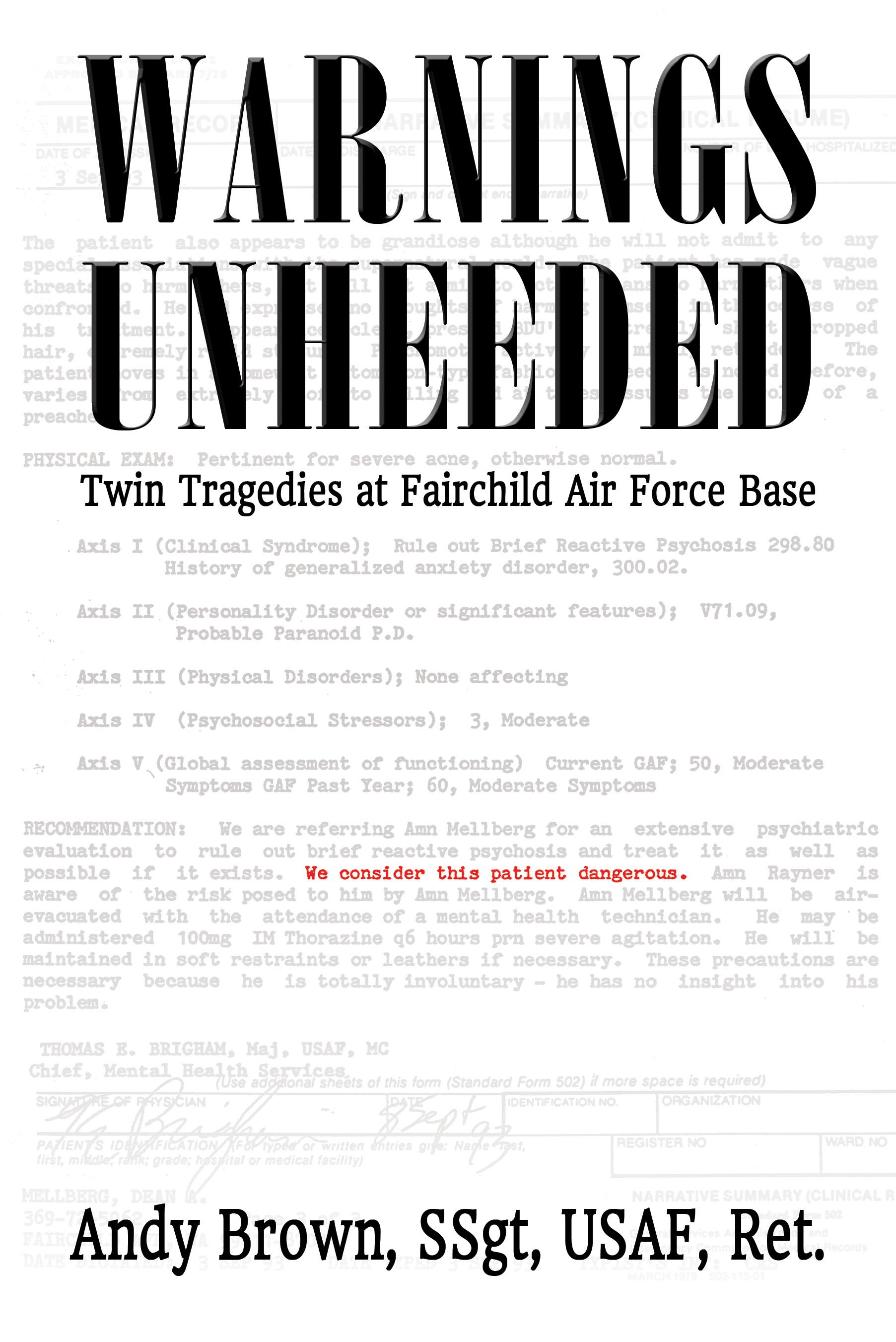 Writing the foreword to the new book Warnings Unheeded, our advisory board member Massad Ayoob comments that Andy Brown literally “rode to the sound of guns,” adding, “Andy reminds us all that uncorrected recklessness can be every bit as deadly as unchecked madness and malice.”

With this insightful comment, the reader is introduced to an extraordinarily detailed analysis of two tragedies suffered at Fairchild Air Force Base in 1994. The parallel stories are told by the Air Force Security patrolman who responded to one of those incidents and subsequently made the 70-yard shot that stopped a shooter killing doctors, patients and staff at the base hospital, but is much wider-ranging than just his experience, weaving together reports, written recommendations, post-incident reactions and many other documents into a compelling narrative.

In 1994, Airman Dean Mellberg, who after several years of psychological problems was discharged from the Air Force, returned to Fairchild AFB’s mental health unit and the adjacent hospital and there killed five–including both his psychiatrist and his psychologist–and wounded 22 other staffers and patients at the hospital. The hospital was located outside the Air Force Base gates, allowing Mellberg to enter with a drum-fed rifle inside a duffel bag.

Warnings Unheeded is a chronology of Mellberg’s assignments from one Air Force base to another, the story of the pilot of the B-52 that crashed and claimed four lives only four days after the murders, along with just enough of the modest Brown’s personal history to set the stage of his preparation, shooting and the aftermath that he endured.

Brown told me, “This book will help others to prevent or intervene in mass public murder. It is the book that I had always hoped someone would write, but I ended up having to do it myself.” Mellberg’s mental deterioration follows phases identified as common to mass murderers by researcher Lt. Dan Marcou, quoted in Brown’s book.

Throughout his enlistment in the Air Force, Dean Mellberg was cause for concern, starting in 1992 at basic training at Lackland AFB, where his bizarre behavior resulted in recommendations for “immediate administrative discharge and referral to civilian mental healthcare,” Brown introduces. A senior master sergeant at Lackland concurred, but a major who had only commanded the training unit for two weeks ordered the staff to keep him in the program.

A pattern of passing off the troubled airman continued through his assignment to technical school, his first duty assignment at the Spokane, WA Fairchild AFB, during psychiatric treatment at several bases, and multiple professional assessments that Mellberg needed to be separated from the Air Force. These steps detailed in Warnings Unheeded make it clear that many knew that Mellberg was not suited to military life.

During 93 days of treatment at Lackland AFB’s psychiatric ward, Mellberg confided that at about seven years of age, he had been forcibly kidnapped and sodomized by an older boy. Mental health providers at Lackland were further troubled by his interaction with his mother when she came to visit. Testing produced a “current working diagnosis of autistic disorder in presence of high intelligence, well compensated by supportive structure provided by patient’s mother,” Brown reports.

The doctors again recommended his discharge from the Air Force, but the autism diagnosis interfered with separating him from the service immediately. The mentally ill airman was moved to several bases, and after being denied one assignment, he pledged he would “pay back” Air Force doctors he blamed for his problems. Brown outlines relocations Mellberg went through before eventually being discharged, then making his way back to Spokane, WA.

Back at Fairchild, Mellberg saw a MAK-90 AK47 rifle advertised on a dorm bulletin board. The dorm manager connected him with the gun dealer. At the home of the dealer, he filled out the ATF Form 4473, lying about his 93-day treatment in the TX Air Force medical center. No one could verify his responses, and even today, mental health treatment records are protected under privacy rules, Brown notes.

Mellberg paid $450 cash for the rifle and stowed it inside its shipping case in his gym bag. After checking into a motel, he went out and bought 80 rounds of ammunition and the next day bought an AK-47 drum magazine, but could not figure out the complicated loading procedure. He complained to a clerk at the Sportsman’s Surplus store that the drum magazine was defective, but the clerk fixed his mistakes and Mellberg left with a functioning magazine.

Viewed as a composite, Mellberg’s final days all point toward mass murder, but standing alone, each single interaction was merely weird, including stashing personal belongings in the motel dresser drawers before he checked out and went to Fairchild’s medical complex. There, he hid in a restroom stall to strap a knife to his waist and pull the rifle from his duffle bag before seeking out the doctors who had treated him earlier.

During some of the time Mellberg was being moved from one base to another, author Andy Brown had been stationed in Greece, but returned to WA in May of 1993, reported for duty at Fairchild AFB’s Security Police Squadron and began working patrol. After a brief assignment in the Middle East, Brown returned to Fairchild and was assigned to the new bike patrol. On the second day of that assignment, Brown queued up for ammunition, radio and pistol, reluctantly accepting a temporary firearm, since his usually assigned handgun was tagged for maintenance. He function checked, loaded and holstered the Beretta, received his assignment, and with the rest of the patrol shift watched a training video on responding to mass casualty incidents. After patrolling the base housing, he paused at a base gate before heading out to check the housing areas on either side of the hospital. Before he could do that, he was dispatched to the mass shooting at the hospital, where he interdicted Dean Mellberg.

Warnings Unheeded details how Mellberg left the men’s room and walked down a hall carrying the rifle, and passed two men so closely that his rifle barrel briefly brushed one’s midsection. One yelled a warning, as Mellberg pushed a door open and shot his former doctor then walked to an adjacent office and shot another doctor who had treated him, then went through the hospital and parking area shooting patients and staff.

Brown outlines the survivors’ mix of initial denial, mistaking gunshots for slamming doors, construction noise or cars backfiring and panicked escape attempts, making this chapter very instructive. At one point, the AK-47 drum magazine ran out of spring tension, and Mellberg had to stop to rewind the tensioner. Knowing the AK-47 system allowed an NCO at whom Mellberg had been shooting to escape during the pause required to get the drum magazine working again.

These details are enlightening for anyone training to survive a mass casualty attack, and although the entire story is detailed and quite interesting, these pages have particular value for our readers. In addition, Brown reports his responses, both at the scene and afterwards. His candid analysis of his post-shooting reactions are similarly instructional, and readers are encouraged to buy Warnings Unheeded, not only for the compelling reportage, but to learn from this man’s honest self-analysis of what the body and mind does after a deadly force incident.

Afterwards, the Air Force sent Brown to one mandatory counseling session along with two dozen other first responders. Brown was taken off patrol duty and worked unarmed tending prisoners in the confinement section. He worked alone, and members of his squadron seemed “apprehensive to approach me, let alone talk to me,” he recalls. He was lauded in print and received awards, including the Airman’s Medal for heroic acts of courage, but a reluctant Brown was stuck in memories of the carnage he’d seen. He second-guessed his actions, felt that it took too long for him to arrive on scene, and was deeply affected by the death of the eight-year-old girl Mellberg shot.

Brown eventually transferred to Hickam AFB on Oahu, HI, but even there he writes, everyday sights and smells “triggered an unwelcome memory of the dead, the wounded, or the gunman. Along with the thoughts came an ever-present anxiety. I hoped the memories and anxiety would fade with time, but they only seemed to get worse. I couldn’t sleep, and I became increasingly irritable and intolerant of others.” Off duty, he holed up in his room and only socialized when drinking, he adds.

When the anxiety was unbearable, Brown left patrol and became an investigator, work at which he excelled. Inside, though, Brown still suffered and became more isolated as he took to his room studying anything he could find on the developing field of post traumatic stress disorder treatment. Requesting psychological help subjected him to a battery of psychometric tests having nothing to do with his problems and for this he was again relieved of duty until the psychologist asserted that he was OK to work.

Brown candidly reports the career steps that led him to acknowledge, “that the job I loved had become just another source of stress. It was apparent that I could either be a cop, or receive mental health counseling, but not both.” He accepted a medical separation from the Air Force, returned to Spokane, WA, married, and started a family. His PTSD persisted, but so did his quest for solutions. Here, Warnings Unheeded, becomes an inspirational story of one man’s courage to address the source of his trouble and heal it.

Brown’s closes Warnings Unheeded with an Afterword addressing armed citizens in particular, encouraging them to carry regularly, train seriously, and be ready. He includes study resources to sharpen perception of a pending mass attack and discusses America’s failing mental health system, noting, in part, “The New York Times conducted a study of ‘rampage homicides’ that occurred between 1949 and 1999 and published an article on 9 April 2000, where the Times concluded, of the 100 incidents studied, ‘At least half of the killers showed signs of serious mental health problems’ and ‘48 killers had some kind of formal diagnosis, often schizophrenia.’ Similar studies have reached the same conclusion,” he stresses.

Warnings Unheeded has much to offer Network members–an unforgettable illustration of the deadly result of failing to address dangers, lessons in personal preparation, passages that explain how people react to a mass shooting event, and the chance to understand how the most justifiable killing affected the man tasked with that duty for decades afterward.

Brown is scheduled to release Warnings Unheeded in just five days, on November 5th. See his website http://fairchildhospitalshooting.com/book for details on how to purchase it, once the book is publicly available.

Click here to return to November 2016 Journal to read more.