This past July was unique in the sense that my other business, the Firearms Academy of Seattle, held a series of training courses, taught by many of the top trainers in the country (all Network members) and they taught over 100 Network members in those classes, too! The vision that I had 10 years ago, where we were a group of serious armed citizens banding together to be strong when one of us is selected for prosecution for nothing more than exercising our God-given right to self defense has come to fruition. For my President’s Message this month, I will tell you how these classes went. 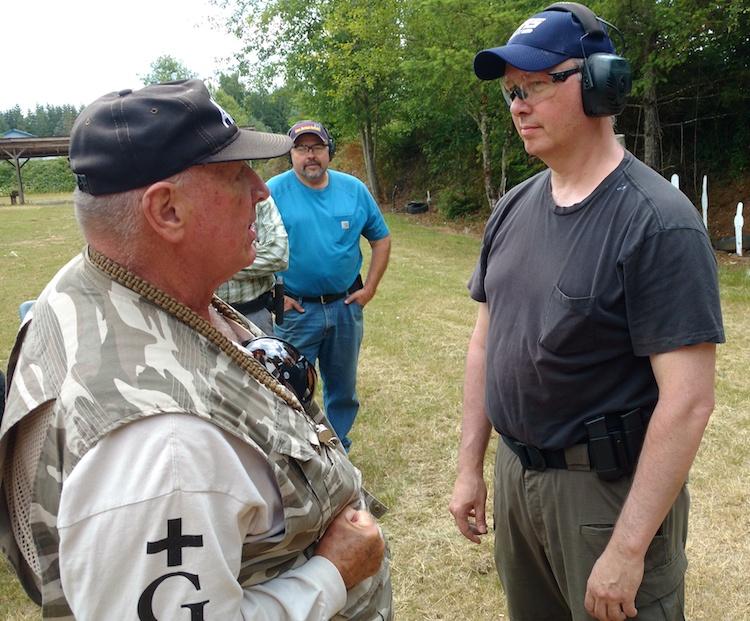 The month started off with legendary trainer Chuck Taylor coming to FAS to teach an Advanced Defensive Handgun course, followed by a one-day Handgun Combat Master Test course. In the first course were 14 skilled practitioners of the martial art of self defense with firearms, and all of them were Network members. These students were being taught by two other Network members: Chuck Taylor and myself. What a joy it was to be amongst so many squared away men and women.

After class, one student told Chuck, “I have been shooting my whole life and taken a bunch of training, but never have I been pushed so hard.” That Network member got his money’s worth. [Seen to the right is Chuck Taylor teaching the “speed rock” with Scott Cerna (right) while fellow student David Leenhouts (center) looks on.]

I had arranged for Chuck to stay and administer his Handgun Combat Master test for the folks that wanted to stay an extra day. For eight more hours, Chuck pushed them even harder, then tested them on what I believe is one of the highest skills testing a serious student of the gun can undergo, Taylor’s Handgun Combat Master Certification. The standards are so stringent that only two of the students, Erik Knise and Anthony Zohowaski, passed the test. Interestingly, both are fairly new to the world of the gun, but I also know that each has been training very seriously for the past couple of years.

As a side note, I had taken and passed the Handgun Combat Master test 15 years ago, when I was at my peak in the shooting skills department. I took the test again this year and was pleased to see that my skills have not deteriorated all that much, because I again passed it. Several other students came very close to passing, and with a little more work these folks could do it, too. View the Handgun Combat Master here http://www.chucktayloramericansmallarmsacademy.com/combatmaster.html.

A week later, I welcomed Massad Ayoob back to The Firearms Academy of Seattle to teach a MAG-40 class https://massadayoobgroup.com/mag-40/. Mas is a valued member of our Network Advisory Board, and all six of the assistant instructors helping him on the range are also Network members. At the start of the class, we counted 22 Network members amongst the 34 students enrolled to study with Mas. By the end of the four-day class, we had increased that total to 25 members!

For those of you who have never trained with Ayoob, you really should. I have been training with him for 29 straight years and am one of the Massad Ayoob Group Senior Instructors. I still learn new stuff every time I’m at a class he teaches.

Many times, Mas will bring in guest lecturers, local people who have some expertise or experience to share. In this class, we had a truly remarkable guest lecturer, the EMT/pastor, who is also a father and grandfather, who on June 17 of this year, interdicted a shooter at the Tumwater Wal-Mart store, here in Washington State. You can see his press conference after the event at http://www.nwnewsnetwork.org/post/i-fired-stop-shooter-pastor-tells-shooting-walmart-gunman. I purposely leave out his name out of respect for his privacy, at least until the legal issues have totally settled.

One of the remarkable things the pastor said was that he had the ACLDN membership application filled out at home, ready to send in, but hadn’t gotten around to it yet! He jokingly asked if membership covered pre-existing conditions. Alas, no, but the good news is that he is not likely facing any legal repercussions. Massad’s class was so impressed with his actions and willingness to discuss the incident with them, that they took up a collection and paid his Network membership dues! 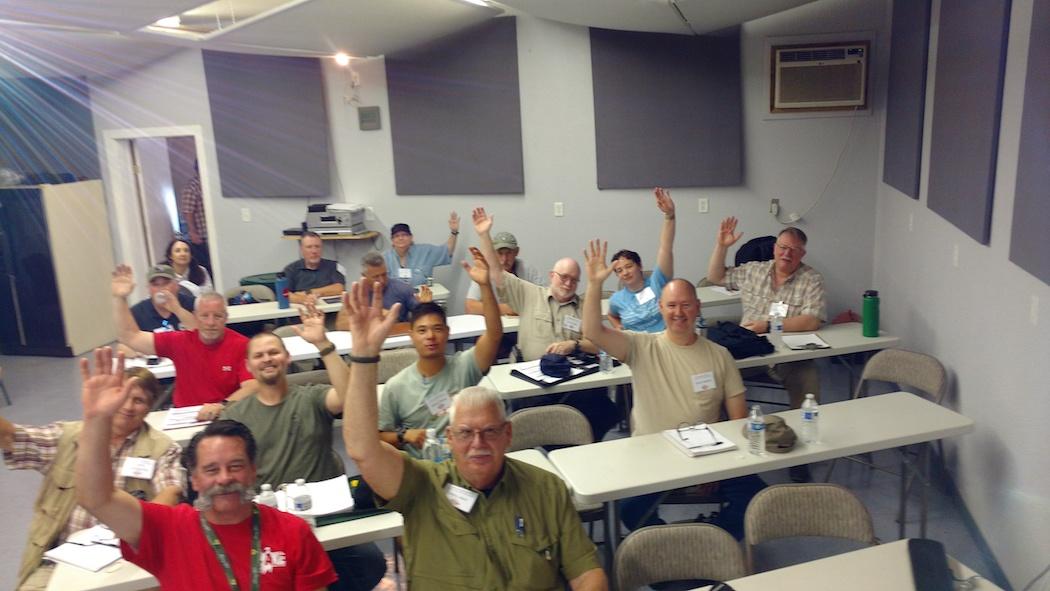 Our MAG-40 class ended on Sunday. We had a very welcome day off, then with FAS instructors Belle McCormack and Erik Knise (both Network members), I went into teaching a three-day Active Shooter Interdiction Course. After the MAG-40 crowd, this was a small intimate course, teaching just eleven students total, six of whom were Network members.