What You Don’t Know Can Kill You

This month I read a wide-ranging book written by two self-defense instructors that encourages honest analysis of your self-defense training strengths and weaknesses. In it, authors Marc MacYoung and Jenna Meek start by explaining that much of self-defense training focuses on just one small fraction of self defense–the physical skills. They wrote this book to help readers learn “to mentally shift gears and think of an incident as more than the final physical aspect” and thus avoid danger or be able to justify using force in self defense. 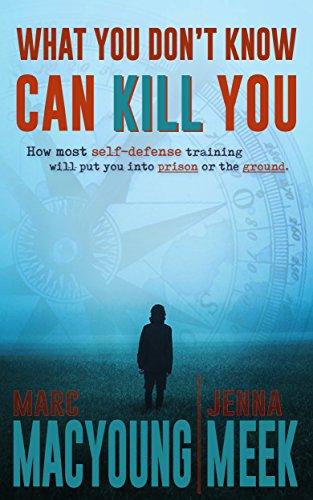 Introducing the topic, the authors assert there are four components to self defense: understanding violence, mental preparation, physical skils and aftermath. They add that each component is “an ocean unto itself.” Most training focuses on a single element “at the expense of other important information.” What You Don’t Know Can Kill You exposes the reader to how much of what’s taught can invalidate a claim of self defense.

Explaining that a lot of how-to instruction is already available, the authors focus this work on “when and how much” a well as aftermath issues. Put aside what you think you know, they request, and consider that a very broad understanding of self defense is preferable to being “trained in depth on very narrow topics,” while erroneously thinking you have mastered the field.

The wide-angle view leads the authors to break self defense down into three stages:

“You don’t have to have a master’s degree in all of these, but as you’ll soon see, a passing knowledge of them will do wonders to keep you out of prison for defending yourself,” they write, going on to demonstrate why “soundbite” advice on self defense causes such problems.

Explaining the complexity of justifying self defense, the authors explain that “a large number of factors...combine to create results that change–given the presence or absence of others.” All the various factors intermix to necessitate use of force but proving justification requires “being able to convey pre-existing knowledge, objective circumstances and assessment,” they outline. The totality of the circumstances is very important, they stress.

Self-defense decision-making has to happen quickly, so Meek and MacYoung teach thinking in defensible terms before facing physical danger, plus learning how to assess and articulate the justifying factors. Mental maps also help with decision making under stress, they discuss later, but the maps must be accurate.

The authors explain the value of adopting a system for assessing threats, be that Ability, Opportunity and Jeopardy (AOJ), Intent, Means, Opportunity and Preclusion (IMOP) or another model. This serves to–

They then teach MacYoung’s own threat assessment model, using the five stages of violent crime in a lengthy chapter that correlates the five stages to the AOJ and IMOP standards, and those discussions foster a deeper understanding of factors that justify self defense.

Mental maps about likely dangers lead to appropriate training, and in an emergency, queue up quick decisions. The authors warn of risks in adopting unsuitable models intended for police or military or feudal warriors or attempting techniques without adequate expertise or responding without understanding different types of violence and the goal of the offender.

Criminals follow predictable steps in setting up crimes, Meek and MacYoung continue. Positioning to create traps at choke points, looking around to check for witnesses, adjusting clothes for quick movement, creating excuses to get too close are all preparatory scripts. They discuss detecting and derailing variations on crime scripts and warn about a robber who goes “off script” by not leaving after getting what he demanded.

Instead of teaching “situational awareness,” the authors suggest determining what is “normal,” “abnormal,” and “dangerous.” Most people assess “normal” subconsciously, although sometimes without enough knowledge. “The key is to recognize when something isn’t within normal parameters and pay attention. This buys you time to evaluate, allows for more options, and if necessary increase your safety,” they note.

Meek and MacYoung discuss threat displays, display aggression and pre-attack indicators and define how each differs. Knowing the uses of each helps us 1) Stay out of fights and 2) Stay off a prosecutor’s case load. “Intimidation can be conveyed through facial expression, tone of voice, body posture, word choice, and range and often all of those above.” People who aren’t trying to aggress still display classic threat behavior to emphasize a don’t-mess-with-me message. “It’s conditional, but it’s still threatening,” they explain.

They explain tricks of pre-attack communication, writing, “People who threaten you deliberately try to create the reasonable belief you are in danger. The more aggressive, loud, and closer they get to you the harder they are trying to sell the danger...When you reasonably believe you’re in danger, you’re supposed to cower,” but if you react with physical force, they may deny they threatened violence and may very well try to have you arrested as punishment for not submitting, they advise.

Focus on “facial expression, tone of voice, body posture, word choice, and range” if facing a threat display because these details provide “preliminary information to prepare for an incoming attack,” MacYoung and Meek recommend. Distance, or range, is the true indicator of whether the person can do what he threatens. There is an added value to these chapters. Threat displays are integral to human behavior, but many of us don’t recognize our own non-verbal communications. “Knowing about threat displays keeps you from enacting them and sabotaging yourself when it comes to a self-defense claim,” the authors write.

In addition, know your own patterns about anger and adrenaline, reactions to alcohol or other substances, they advise. Adrenalized reactions include hyper focus on the threat and thinking there are no options except to “act or react a certain way.” Size and distance distortions are common, so when adrenalized, the most important question becomes “what is actually happening?”

You can think rationally under adrenaline’s effects but it takes deliberate training and practice, they emphasize. “A quick look and calculation to determine if he’s in attack range brings a different part of your brain back online. Knowing that he’s outside attack range gives you more options…His attempt to re-establish the range is an important danger sign,” and offers a formula for determining who is within attack range, they add.

Appropriate self-defense decisions require knowing how society sometimes misunderstands how much force meets the necessary and reasonable standard. Time required to stop a committed assailant is also often misunderstood, the authors explain. Not only do most state laws view throwing a punch as battery but add an object–be that a self-defense tool or a drink bottle–and the charge jumps to aggravated battery, they state. Conversely, “one of the greatest physical dangers to you is when someone uses a higher level of force and you respond with an insufficient amount of force,” they counter, because repeated blows suggest willing participation in a fight. It is not enough to fear death or injury, they continue. That apprehension must be founded in external facts.

What You Don’t Know Can Kill You addresses two critical elements in claiming self defense. One echoes a topic on which the Network has published much: using force only with genuine justification. The other element deals with peaceful interaction with fellow citizens and in this reviewer’s opinion, that is equally–if not more–important. “The largest component of self-defense is people skills...Criminals and sociopathic monsters are rare, but the world is full of folks who will attack you for pissing them off,” they teach.

I recommend reading What You Don’t Know Can Kill You for information about dealing with both, but I believe readers reap the most benefit in smoothing out day-to-day interactions.