With the release of the seventh edition of The Gun Digest Book of Combat Handgunnery, author Massad Ayoob recognizes the authors of previous editions of this classic compendium, starting with the first edition released in 1983, written by Jack Lewis. Ayoob authored the fifth and sixth edition of Combat Handgunnery, preceded by Chuck Taylor who wrote the fourth edition and Chuck Karwan, who authored the second and third editions. While the shoes to be filled are large, it is hard to imagine an author better qualified to fill them.

Ayoob introduces his topic by noting that human violence necessitating self defense is as old as humanity and little changed, so an updated seventh edition, he notes, focuses on new understanding of, “the physiology and psychology of shooting, particularly under extreme stress.” 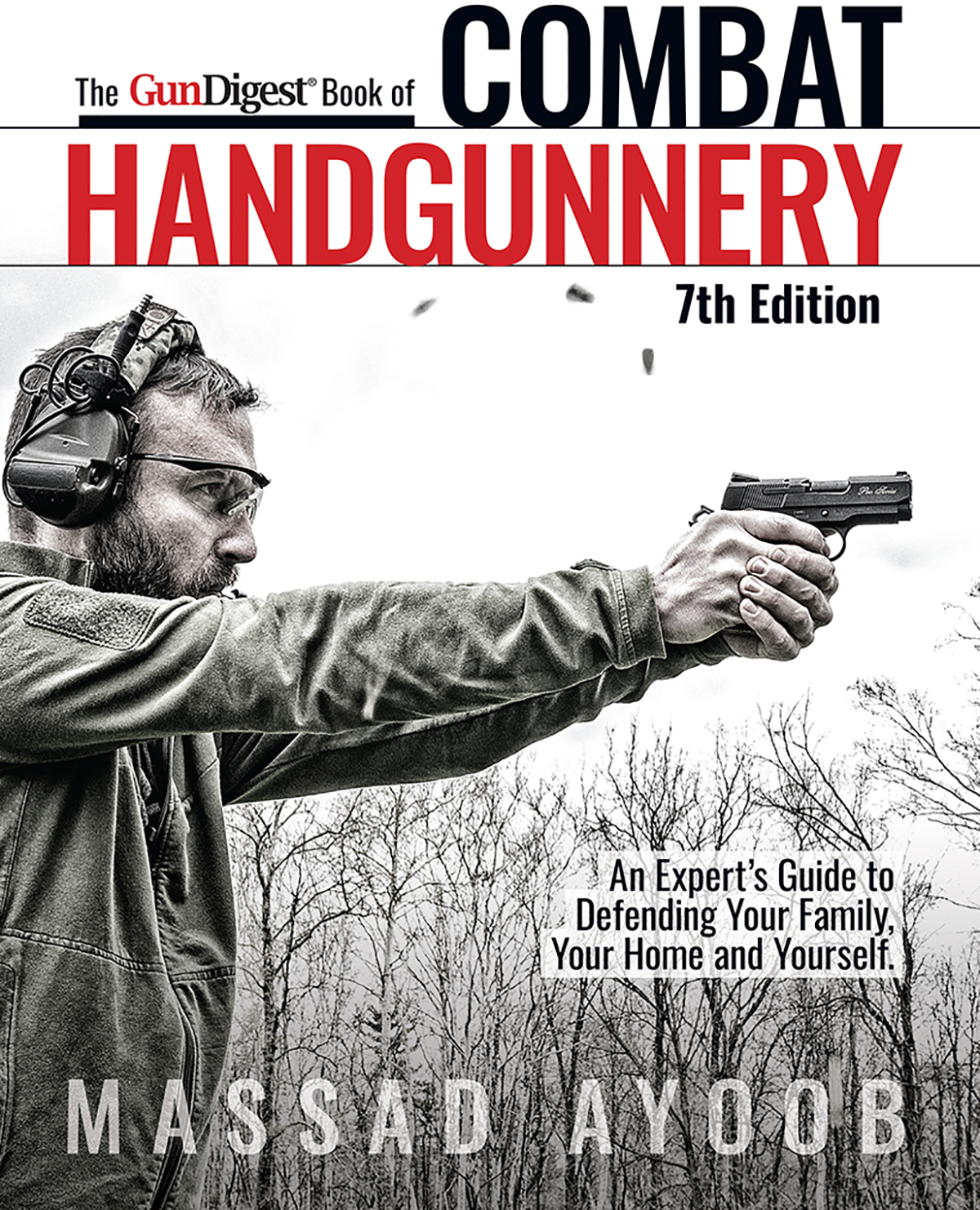 Other areas of change include the legal landscape, he continues, commenting on the greatly increased “provision at law for the honest citizen to carry a loaded, concealed handgun in public” compared to 1983 when the title’s first edition was published. Like the first edition, the seventh’s stated goal “is to transmit a working knowledge of the current state-of-the-art of defensive handgun technology and its corollary topics, of how to effectively use them and how to find out how better to use them and more importantly, when to use them,” he notes.

Ayoob reprises as the decades-old argument of revolver v. autoloading pistol as it is affected by guns in current production. The revolver has advantages of administrative handling, simplicity of function, ammunition versatility and reliability, to cite only a few of his arguments. The autoloader, he notes, has a higher hit potential under stress, has superior ergonomics, greater ammunition capacity, is faster to reload and the flatter profile aids in discreet concealment, he accounts among other favorable factors.

Other hotly contested disagreements on which Ayoob weighs in include use of a manual safety on traditional double action pistols, point shooting or aimed fire or use of a rough aiming index, and the perpetual “caliber wars.” The latter he follows with an extensive chapter on ammunition selection including brands, calibers and bullet composition and design. He closes by stressing, “Let’s close with what every side of the debate agrees on: shot placement is the key concern, and time spent agonizing over non-existent magic bullets is better spent practicing to shoot and hit rapidly under high stress.”

Discussing how extreme stress in a life and death situation interferes with many of the techniques taught, Ayoob discusses the practical application of handgun use, recognizing loss of dexterity under a fight or flight response’s adrenaline dump and the concomitant strength gain. Of initial concern, Ayoob introduces is how the shooter grasps the handgun–one handed or with two hands. “The grasp needs to be strong enough to maintain control of the firearm even if the gun or hand are grasped or struck, both predictable occurrences in the sort of situation that is the combat handgun’s raison d’etre,” he notes and gives the topic of grip such importance that it is discussed in three separate chapters.

He discusses shooting stances, identifying advantages and disadvantages in the three commonly taught, how they adapt to various real-life challenges like shooting from awkward positions or against threats to the rear or flank, and with one hand only. He comments, “we can’t always jump into our favorite position when attacked. The shooter needs to know how to fire effectively whether his strong foot is forward, or his weak-side foot is forward, or his feet are parallel.”

Concealed carry mistakes ranging from inadvertently allowing the general public to see the gun, interacting with police on unrelated matters, couple with security against theft or misuse of a gun kept at home in a subsequent chapter. He wraps up this topic with the advice: “No matter where your gun is stored, it is possible that a violent intrusion will happen so rapidly that you can’t get to it in time. The one way to always be certain you can reach your gun is to always wear it.”

Nearly all gun owners love accessorizing, customizing and “improving” their guns, and while there are definitely time-proven modifications, some custom alterations are catastrophic, not only by interfering with the gun’s function if employed under stress, but some raise serious, indefensible questions if investigated by police or challenged in the courts. Chapter 12, entitled Accessories And Handgun Enhancements is a great compendium of the good, bad and the undesirable.

Beveled magazine wells, carry optics, extended slide releases, magazine releases and thumb safeties are evaluated, as are night sights and pistol-mounted lights, the latter of which he opines, is like “using the telescopic sight of your rifle to scan for game: you’re pointing a loaded gun at anything you look at. I want a heavy trigger pull and/or an engaged safety on the weapon to which my light is attached. This will minimize the chance of a ‘startle response’ causing an unintended discharge when the user sees something that startles him but doesn’t warrant a deadly force response.”

Ayoob closes The Gun Digest Book of Combat Handgunnery with a discussion of priorities, explaining, “Training is always a better investment than equipment. Software in your brain is always with you, and there’s only so much hardware you can carry. And there are places where you can’t carry this kind of hardware at all. I take at least a week of training a year for myself, and would recommend the same regimen to you.”

But training doesn’t take top spot, he prioritizes, adding, “Awareness and alertness are more important than combat tactics, because they can keep you out of combat to begin with. Tactics are more important than marksmanship, because they can often keep you out of danger without you having to fire a shot. Skill with your safety equipment, including your weapons, is more important than what type of weapon you have. With all those things accomplished, your choice of equipment is one of the few things you can work out before the fight, so it makes sense to have the best quality gear of a kind ideally suited for your predictable threat situation,” he concludes.

The seventh edition of The Gun Digest Book of Combat Handgunnery is classic Ayoob, and fans of this prolific writer and instructor are sure to enjoy this review of the principles he has been teaching us for years. With troubled times bringing many new gun owners to the ranks of armed citizenry, the release of an updated edition of Combat Handgunnery is well-timed and will make an excellent gift to start a new gun owner on the path of the responsibly armed man or woman.