Strategies to Escape an Active Shooter 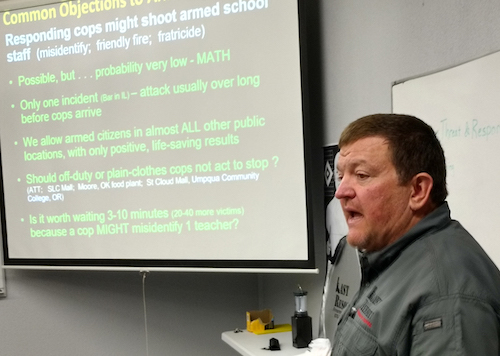 An Interview with Ed Monk

Last month, Network President Marty Hayes’ review of three active shooter interdiction courses, including his outline of Lt. Col. Ed Monk’s class, generated a lot of feedback from interested readers. When Monk visited us, the opportunity to explore strategies to survive a mass shooting was just too good to pass up. Since Marty covered the firearms training, I asked questions about broader strategies including what to do if not carrying guns due to restrictions as found in most schools, for example.

Co-owner and instructor at Last Resort Firearms Training, Monk retired after 24 years active military duty, with the last 20 years as an armor officer. He holds a master’s degree in continuing education, and taught school for three years in a district outside of Louisville, KY and one year in AR. He currently serves as a part time municipal police officer.

In exploring questions about escaping a mass shooting attack, Monk and I discussed a number of topics that I believe our members will find interesting. We switch now to our Q & A format to share Ed Monk’s ideas and research in his own words.

I got a call the other day that I thought would make good subject matter for my President’s Message. The caller, a Network member for several years, related a story to me. It seems that a good friend of his is an avid bicycle rider. He was riding along one day and was chased by a dog. In response to the dog chasing him, he drew his pistol and fired close to the dog, with the hope of scaring the dog away. Our member related that he tried to explain to his friend how this might not be the best course of action to take. His friend was having nothing to do with the member’s argument and so the member called me to discuss it.

We had a nice discussion covering several factors. First, any discussion of use of force must take into account your local laws, including a search for appellate court cases addressing the issues in the incident. I recently came across a great legal research tool, available free of charge and without commercial advertisement. That tool is called Google Scholar and it is awesome. I have been using it to research case law regarding the Network’s fight with the WA Office of Insurance Commissioner and in doing so, cross checked what I found against some other case law search engines. I found it to be accurate.

This month’s Attorney Question continues a discussion of the legal implications of gripping a holstered handgun while issuing verbal commands to stop an assault. If you missed the first set of attorney responses, read them at https://armedcitizensnetwork.org/august-2019-attorney-question and https://armedcitizensnetwork.org/september-2019-attorney-question as they are instructive. Here is the question we asked our Affiliated Attorneys:

In many states, a person has committed the crime of assault when he or she verbalized a threat of force accompanied by threatening actions.

This can create a problem when an armed citizen only puts his or her hand on the grip of the holstered pistol and gives verbal commands to stop a threat without actually drawing the gun. If a citizen in your area does that, with what crime are they likely to be charged? If convicted, what is the likely punishment?

What should a Network member do to avoid facing charges after that kind of situation?

The third and final installment of multiple answers to these questions follows.

Studying crime reports is one of the best ways to encourage “what would I do if…” questions to hone mindset, readiness and self-defense skills. I’m a big fan of true stories about men and women who fight back against violent criminals. A few weeks ago, a Network staffer showed me a book he’d read over the weekend that was coauthored by Robert A. Waters, whose earlier work I reviewed in this journal in August of 2010. I downloaded his new book and started reading the same day.

Ed Monk’s research, as discussed in this month’s lead interview, emphasizes how attractive a so-called gun free zone full of victims who can’t fight back is to a sociopath wanting to make headlines for committing an atrocity. I was doing some additional study on armed intervention when I ran across a web page made up of news reports compiled by John Lott at https://crimeresearch.org/. It seems to me that instead of posting “No Guns Allowed” signs, any rational business or administrator or government entity should reach out to law-abiding concealed carry practitioners, saying, in effect, “We’re safer with you around. Please, come on in to our offices, hospitals, schools, shopping centers and churches!”