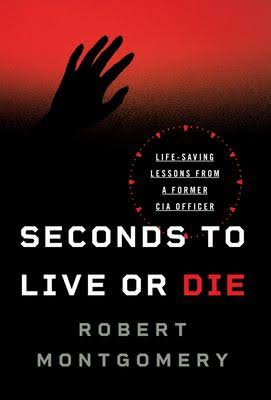 In Seconds to Live or Die, Montgomery emphasizes that being thrown into a life-threatening emergency accelerates heart rate and can take reasoned thinking off-line. Learn to get through the “denial/deliberation/action cycle – then get into action as quickly as possible,” he urges, recommending breathing exercises to lower heart rate and regain cognitive abilities quickly. Preparation is a vital countermeasure against freezing in terror, and as an example, the author describes his family’s home defense walk through and recommends visualization as a training aid.

More important is prior acknowledgment of dangers and practicing awareness to detect hazards before your life is at risk. Montgomery introduces his book with the promise to show readers, “How to mentally and physically prepare yourself for the worst fifteen seconds of the worst day of your life. Those seconds could be when you are at home, at the ATM machine, at school, on a date, on a plane, at a five-star resort, at the office, at a place of worship, or simply driving home from work and witnessing or becoming part of a horrific car crash. Sometimes, there is no apparent rhyme or reason to violence. Other times, however, there is ample reason: you represent something someone hates enough to kill you for it, or you possess something a sociopath wants.”

The term “situational awareness” gets a bad rap, but Montgomery defines it as “simply being in a higher-than-normal state of alert,” and later, he uses an even better definition, “sifting out the abnormal from the normal.” He relates career experience to underscore the mental exhaustion of being continuously alert and constantly assessing one’s surroundings. “There have been times in my life when I was more situationally aware for extended periods, such as in war zones or in particularly dangerous locales. So it would make sense to say that there are degrees of awareness,” he explains.

Montgomery discusses moving from zones of safety into the unknown, “Working in the counter-terrorism realm for as many years as I did, I understand that two potential choke points for me as a target are in the vicinity of my home and my workplace. I will eventually always end up there...As I drive, I start to scan the road, looking for signs that something is not normal. This could be other cars, people loitering, or objects along the road that weren’t there before. This is the state of being situationally aware...my focus is on everything around me. I basically know what is normal for the environment I am traversing, so I ignore that which is normal.”

He suggests maintaining the same alertness when out in public on foot, explaining that with practice, identifying escape routes and assessing people and conditions around you become habitual. I found this chapter an echo of Ed Lovette’s April 2019 interview in this journal in which he talked about chokepoints and other situations that increase risk.

Sometimes when trying to raise self-defense awareness in those we care about, we inadvertently create a sense of dread that scares off the person we’re hoping to coach. Montgomery, writing matter-of-factly, avoids that pitfall, in my opinion. In one chapter, he discusses taking his college-age son on a walk around the college neighborhood, warning of the hazards of earphones and smart phone use in public, and other tidbits of wisdom. He advised, “This is the way you should navigate the street. If you see something that gives you pause, avoid it. If you turn your back to retrace your steps, make sure you check behind you. If you observe someone taking an interest in you, and he starts to mirror your movements, consider it a blessing—now you can plan a course of action, whether it’s walking into a store, changing your direction, walking to the nearest police station, or preparing to fight for your life.”

I am impressed by the phrase “Consider it a blessing.” The idea of being grateful for detecting a predator’s interest really spoke to me. I’d never heard threat detection described that way, and I like it. Montgomery makes the distinction between acting on intuition and paranoia. “Being paranoid makes you fearful of everything real and imagined, whereas listening to your instincts and being situationally aware puts your mind on alert when something doesn’t feel right.”

Specific advice about weapons in Seconds to Live or Die is, from my viewpoint, a mixed bag, and I’m sure experienced readers drawing on their training’s particular focus won’t find every aspect of the second half of the book to their liking. In many ways, I wished I could share just the first half with my loved ones. Teaching physical skills in a book is at best an iffy prospect. Montgomery really shines on what some call “soft skills,” but I had much more difficulty picking through his chapters on gun, knife, chemical deterrents and empty hand defenses.

I was, though, motivated to dredge through the entirety of the book because I agree without reservation with Montgomery’s observation that most people have considerable difficulty with the idea of inflicting physical, hands-on damage on another human. This is a mental block anyone who contemplates self defense must confront. He emphasizes, “The brain can only go where the brain has gone before,” pointing out that self-defense training has to include mental preparation and physical practice that imagines inflicting serious injury to incapacitate an attacker and the possibility of causing death, applied across the spectrum of force-on-force training, using photorealistic targets of human beings during firearms training, visualization and a lot more.

Montgomery covers knife attacks, improvised weapons for stabbing or striking, pepper spray, and closes this section with the observation that it’s foolish to become over-invested in a single defense weapon or technique. Mental toughness remains the most important weapon. Montgomery emphasizes, “Program yourself, starting now, that if you get stabbed, you still have a lot of fight left in you,” adding later, “Going for a debilitating injury in the midst of being attacked by a person with a knife obviously requires considerable mental discipline, but you can start to ingrain it into your DNA through slow practice. Focus on achieving one injury to buy precious seconds to inflict the next injury—and the one after that followed by the one after that—until the threat is unconscious or dead. Slow deliberate practice will ingrain proper targeting. Speed will come with experience.”

Those skilled in the various physical fighting styles might voice objections to Montgomery’s illustrated sections on empty-hand defenses. That kind of criticism is inevitable when only words and pictures try to convey the dynamics of movement and there is neither time nor room to fully explain underlying principles and tactics. Frankly, this part of the book serves best to ignite the reader’s interest in training, not to teach specific techniques through printed word and pictures. Likewise, calling pepper spray Mace®, or suggesting that the home defense shotgun is effective without aiming, are little details that will sit poorly with readers coming from various training backgrounds. Adhering to the adage about not throwing out babies with bathwater, I’m not ready to discard the entire book over those details.

The people we want most to reach with the message of personal safety and responsibility often are not ready to stand up against society’s campaign of prejudice about guns, but these folks need to survive the daily dangers that may be present while they’re commuting to work, grocery shopping or undertaking other regular activities. They need the voices of people they feel understand how they live and think. Several decades ago, Strong on Defense filled that niche admirably, but for a while after it went out of print, copies became scarcer than hen’s teeth. Nowadays, its 1997 examples and scenarios come across a little dated, especially when presented to a loved one you just want to wake up to the dangers around them. That’s why I’m happy I stumbled across and read Seconds to Live or Die.