The Conscience of the Constitution: The Declaration of Independence and the Right to Liberty

We know our nation’s Constitution and can quote long passages that prohibit government from infringing on our beloved liberties, but have we invested much thought to its foundations? The book I read this month defined how our Declaration of Independence, which predated the US Constitution by a decade, set the standard our nation’ leaders carried forward while adapting from the Articles of Confederation to the Constitution, then detailed in the Bill of Rights, and finally either upheld or eroded by subsequent Supreme Court decisions.

“We hold these truths to be self-evident, that all men are created equal, that they are endowed by their Creator with certain unalienable rights, that among these are life, liberty and the pursuit of happiness. That to secure these rights, governments are instituted among men, deriving their just powers from the consent of the governed. That whenever any form of government becomes destructive to these ends, it is the right of the people to alter or to abolish it, and to institute new government, laying its foundation on such principles and organizing its powers in such form, as to them shall seem most likely to affect their safety and happiness...when a long train of abuses and usurpations, pursuing invariably the same object evinces a design to reduce them under absolute despotism, it is their right, it is their duty, to throw off such government, and to provide new guards for their future security.” 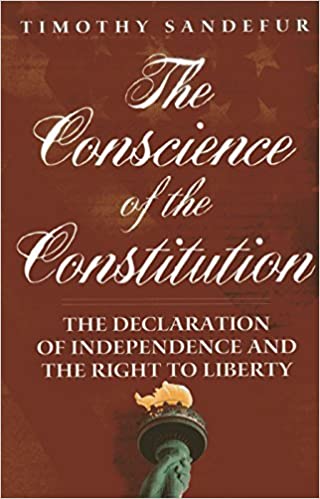 Drawing on speeches and debates, commentaries, memoirs and other writings by the founders, judges, lawyers, researchers and politicians all across the political spectrum, the book’s author Timothy Sandefur defines the relationship between the Declaration of Independence and our constitution and how we have wandered from the founders’ vision for America. He explains, “Today, we are prone to read the declaration as political rhetoric or a general pronouncement of aspirations. But it is more: it is a legal document—a part of the nation’s organic law and the inspiration for America’s constitution.” The declaration is the philosophical statement through which we understand the intentions of the constitution, he stresses.

A common error results when people list the rights due us as citizens, when indeed the intention of both the declaration and the constitution were, in the words of Thomas Jefferson, “unobstructed action according to our will, within the limits drawn around us by the equal rights of others,” Sandefur quotes. The declaration’s premise is “that no person is fundamentally entitled to rule another,” a far broader principle we should embrace and defend, he urges. He exposes big government’s power-hungry intentions expressed through ideals like majority rule, legal realism, positivism or state’s rights and invests many pages weighing human rights against the idea that government grants certain privileges. It’s not casual reading but clarifies why seemingly good concepts like majority rule are dangerous to liberty.

From the declaration, we receive “direction in understanding the limits of government power,” that aids in understanding “such broad constitutional phrases as ‘privileges or immunities of citizens of the United States’ or ‘due process of law’ or ‘equal protection of the laws,’ ” writes Sandefur. The backdrop of slavery is a canvas on which he illustrates how the 14th Amendment to the Constitution served as a national restatement of “primacy of liberty and the other principles of the Declaration of Independence.” He discusses post-14th Amendment US Supreme Court cases and the tension between states’ rights issues and the ideal of a single, unified nation.

It is common to think the civil war was all about slavery, but the big question was state's rights, including the question of whether the federal government could dictate who was allowed citizenship or could the states deny citizenship to certain classes? The 14th Amendment, ratified in 1868, gave the power of the constitution to “the principles of paramount national citizenship and federal protection for natural and common law rights, thereby resetting the constitutional priorities in accordance with the Declaration of Independence,” Sandefur writes. “Where the declaration announced that people are born free, and can choose to create a government to protect their rights—thereby becoming ‘one people’—the new amendment, too, is grounded on a national body politic, which prioritizes individual rights over government power. All Americans are entitled to security for the rights that belong to the citizens of all free governments—and that security is valid against the state governments as well.”

“The [14th] amendment’s new Privileges or Immunities Clause would provide for ‘protection by the government, the enjoyment of life and liberty, with the right to acquire and possess property of every kind, and to pursue and obtain happiness and safety’ as well as ‘the personal rights guaranteed and secured by the first eight amendments of the constitution’” Sandefur cites. Following the civil war, “States still retained most of the routine responsibilities of government, including the protection of individual rights. The [14th] amendment simply required states to exercise their power consistently with those rights,” he explains, then details how supreme court rulings since have affected the 14th Amendment, starting with the infamous Slaughter-House ruling and ending with the 2010 McDonald v. Chicago.

I have to admit that I struggled to get through The Conscience of the Constitution, but I am glad that I did. The more we understand errors of the past like the Slaughter-House ruling, the more we understand what holds the court back from taking cases to limit big government in the present day. Sandefur opines that much of the court’s unwillingness to right the wrongs of Slaughter-House stems from fear of having to address the abuses against liberty the welfare state causes. In this, the court deviates from the principles of the declaration. He then explores the intention of the privileges and immunities clause and dangers of arbitrary enforcement against citizens by government.

Sandefur discusses how due process fails when a law deprives a person of “life, liberty or property,” asserting that, the constitution is a compact with government agreeing to limits on its powers and citizens assenting to be subject to the law. How far reaching are the promises of substantive due process? Some jurists think it only requires that laws provide “some sort of procedure before it takes away a person’s life, liberty, or property, it has met its constitutional obligation,” he observes, asking, Is that sufficient? “The constitution does not require just any process but due process—the people have a right not to be treated arbitrarily by the government,” he stresses.

Abraham Lincoln once famously compared a democracy to a pair of wolves and a lamb voting on whom to eat for dinner, Sandefur introduced early in the book. He builds on that theme throughout The Conscience of the Constitution, adding during his discussion of substantive due process, “Since the constitution takes precedence over the will of the majority, it is proper for courts to enforce the constitution–which is the supreme law–even against the majority...The founders were well aware that in a democracy, the majority can often confuse the genuine social good with its own self-interest, and can exploit and hurt minorities or individuals for this purpose.”

Dissecting various elements of the constitution brings Sandefur back to that theme time and time again. In an informative chapter exploring judicial activism, he cites Alexander Hamilton, noting, “The constitution... embodies the genuine will of the people, whereas a statute only embodies the will of a particular legislative majority at a particular time.” Sandefur asserts that much of today’s case law stems from “Progressive political theory that prioritizes some rights over others, usually based on whether they are seen as promoting collective ends or only individual goals. This scheme has often been criticized by lawyers, law professors, and even federal judges, but it remains the framework within which constitutional cases are decided today.”

What about bureaucratic rule making? Sandefur states, “Rules and regulations that affect the rights of ordinary Americans are not laws written by elected lawmakers but regulations imposed by unelected administrative agencies that wield broad authority to interpret their own commissions” that wield nearly limitless power. “These bureaus are not accountable to the voting public in any realistic sense; they are generally beyond the control even of an affected citizen’s elected representatives. Yet courts review their actions with a lenient, deferential attitude,” he writes.

If you find you get bogged down over the more detailed elements of The Conscience of the Constitution, take a break and skip to the conclusion. In reviewing the final chapter, I found much that led me back to study the material of the earlier chapters. The conclusion also contains Sandefur’s call to action: “Today, more and more Americans are realizing the dangers of expanding the scope of government and are protesting the continued calls for bailouts, handouts, entitlement programs, and restrictions on freedom, privacy, property rights, and other aspects of liberty. The time has come for the legal community to pay heed. The time has come to reject the notion that people have the right to control each other’s lives and to take the fruits of their labor. The time has come to secure the blessings of liberty for ourselves and our posterity.” Better understanding the constitution and declaration’s foundational principles are, in my opinion, well worth the time required to read and think about Sandefur’s arguments and conclusions.