“Crimes rarely go unannounced, without prior notice, clues, or warnings,” David Givens, an anthropologist and specialist in nonverbal communication, writes in Crime Signals. “Murderers, sexual predators, terrorists, and thieves all emit telling cues before their misdeeds.” These include poor eye contact called “gaze avoidance” and other cues. With terrorism and crime on the rise, citizens are warned to remain alert to suspicious behavior, but what they should notice instead “is really anomalous behavior,” he explains. 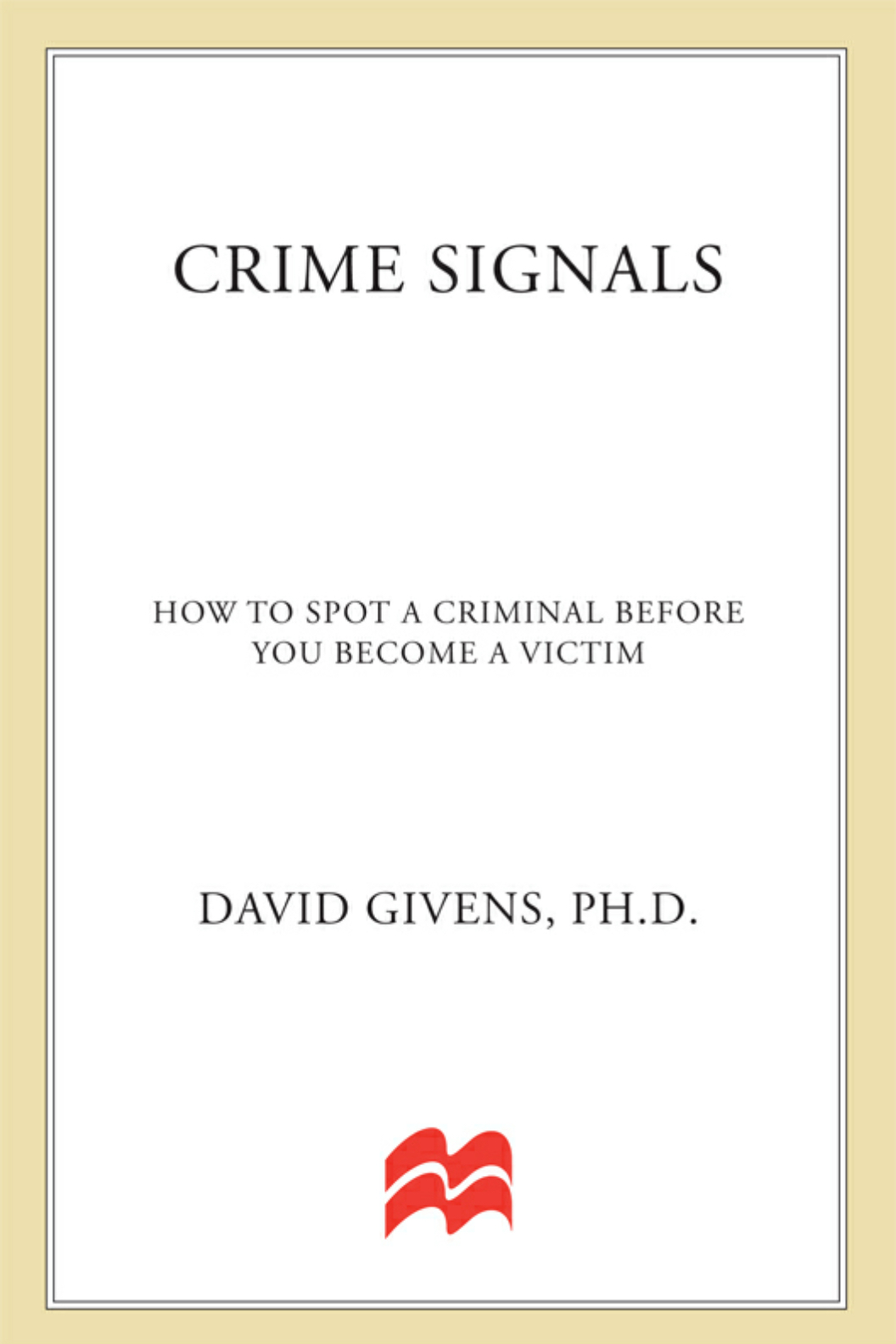 Anomalies might include someone with an obviously weighted-down backpack inside an upscale shopping center, a car with lots of able-bodied passengers pulling in to a handicapped parking space near a store entrance, customers all standing motionless inside a convenience store, a person in running clothes smoking a cigarette beside a parked van and more. All of these anomalies suggest that the person is acting out a pretense to obscure what is really planned. Rarely is the acting perfect.

“What,” Givens introduces, “do their bodies say when they lie?” He details how “hands, shoulders, lips, and eyes” will tell the truth, despite words to the contrary. Later chapters detail how skilled liars manipulate eye contact, illustrating that presence or absence of one “sign” alone isn’t proof positive. Aggressively pointing index fingers or complete absence of gestures, vehement assertions of innocence, aggressive displays of anger or a flat, unemotional, disconnected demeanor can all support a conclusion of untruthfulness.

Conversely, truth telling is often accompanied by “raising the eyebrows, lifting the toes while seated, and rising up on the toes while standing—to add emphasis at the end of their sentences,” he quotes FBI profiler Joe Navarro. Still, the study of faces, as illustrated by wife-killer Scott Peterson’s emotionless face or a rage-filled abusive spouse as seen at other murder trials, alone is not enough. Predicting who will or identifying who has killed relies on a confluence of anomalies.

Just as we’re taught to watch the hands to detect danger, Givens notes that, “Hands are such incredibly gifted communicators that they always bear watching, especially in matters of truth or falsehood.” Likewise, touching one’s lips with hands or objects such as a pencil or pen can signal lying. Infamous news images of documented lies illustrate shoulder shrugs, palms-up gestures called “hand shrugs,” averted gazes and thin, tight-lipped expressions.

Givens notes that gaze behavior is culturally-dictated and can be faked by one skilled and experienced in deception. Likewise, clever con men learn to charm and convince through “body language, facial expressions, and posturing.” Touch, dramatic or flamboyant gestures, conspicuous charm, and repetitious rituals can all serve to beguile victims. Watch and understand what people do, as that's more truthful than what people say, he later stresses.

Intermittent explosive disorder, attacks to derail a perceived trap and territorial aggression are discussed as triggers that “may quickly ignite into violence.” Givens explains that the study of proxemics, popularized by Edward Hall in The Silent Language was particularly insightful, since, as Givens notes a bit later, because silence when talking is ordinary is “one of the most commonly recognized danger signs.”

Givens discusses facial expressions–both intentional and unintentional–beginning with eyes that are narrowed or extraordinarily wide (which he dubs flashbulb eyes and names a “visceral sign of emotion”), blinking, and the constriction or enlargement of the eyes’ pupils as dictated by the sympathetic nervous system, drawing examples from news photos of prominent criminals like Charles Manson.

Nonverbal cues given off by sexual predators are discussed at length, including watching and testing for submissive victims, forward through additional stages into physical abuse. Lists of warning signs are useful not only to avoid victimization but also for family members and friends who wonder if a loved one is falling victim to a predator.

Visual indicators given off by terrorists is the subject of an interesting chapter in which Givens addresses use of color and symbols, and physical behavior that has tipped off immigration officials, airline staff, and others who have interdicted terrorists. “Anxiety is a telltale sign that something is wrong. Eyes widen, fingers fidget, voices tremble, foreheads glisten with sweat,” he details. While one anomaly alone might not set off internal warning sirens, several in tandem certainly should.

An engaging aspect of Crime Signals is the author’s use of notorious evil-doers as examples to help readers envision the gestures and expressions that reveal a truth obscured by words. He talks about analyzing the motions and content of a TV network interview with Saddam Hussein, as one example that will be remembered by many. The OJ Simpson trial, the trial of Martha Stewart, Bill Clinton and priests convicted of sexual molestation illustrate other points.

Gang clothing, hair styles, tattoos and jewelry, gestures, swaggering gait and even dances all communicate messages the watcher ignores at his own peril but each comes with subtle distinctions to separate the genuine from the imitation. “Recognizing how the body language of gang members differs from wannabes who mimic their actions is a good way to protect yourself from harm,” he writes. His discussion of criminal gangs explains how group unity is communicated through appearance and gesture.

Givens then draws interesting comparisons between gang leaders and corrupt corporate moguls. One leading trait is bullying. “Psychologists identify bullying as one of the most stable of all human behaviors. It may begin in childhood and continue as an adult coping style.

He details one disgraced executive who had a “hair-trigger temper, publicly belittled people in meetings, and launched aggressive tirades at critics and colleagues alike.” While some use “confrontational body language and strident tones of voice,” others use gifts with strings attached to exert control. “Anthropologists today agree that when accepted, gifts incur strong obligations. Accepting a gift carries an implicit obligation to reciprocate in kind,” he writes.

Body language of thieves is dissected. The strategy of acting like people with good reason to be in a location lets thieves work in plain sight, but a robber working the streets relies on catching you unawares or lulling you into unmerited trust, he writes. Detecting an intended home invasion uses unintentional cues an innocent-looking decoy gives away that their clothing and physical features conceal: “If their body language seems abnormally tense or anxious, it’s because they’ve arrived on your porch fully primed for action. You will see adrenaline-charged demeanor, men standing taller, moving faster, showing tense hand gestures. That they lean forward and crowd your doorway telegraphs eagerness to come in. They poise to spring forward should you barely crack open the door,” he writes.

Givens theorizes that crime is basically theft, so closes his book synopsizing, “Crime—whether violent, conniving, or petty—is almost never completely unpredictable. Nonverbal signs betray criminals throughout their misdeeds. As we’ve seen, crime signals are best decoded prior to unlawful acts.” Crime Signals was entertaining reading that also contained useful lessons for the reader who wishes to be more alert to impending danger. I enjoyed it.