Just in time for the cold, rainy days of December the Second Amendment Foundation’s Merril Press released Alan Gottlieb and Dave Workman’s follow-up volume to a book we reviewed some years ago, America Fights Back: Armed Self-Defense in a Violent Age. Their latest book, entitled Good Guys with Guns, is every bit as good. The authors stress that most armed citizens never “intended to find themselves in the middle of gun battles. They were ordinary people who were suddenly faced with extraordinary circumstances.” 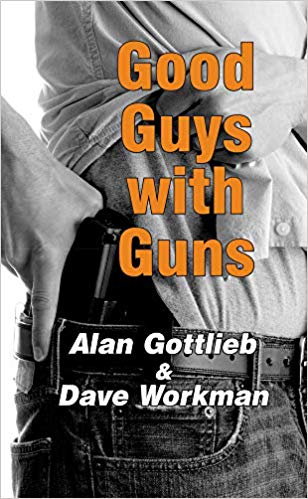 The introduction notes that “the right to self-preservation is as clear and sacred today as it has always been,” adding a valuable perspective that despite the argument against gun ownership so prevalent on popular media, what we are arguing is not a right granted by the Second Amendment, but rather, that the Second Amendment protects that and a number of other “pre-existing natural and human rights frequently called ‘God-given rights’ and the oldest of these is the natural right of self-preservation.” The Bill of Rights is intended to restrict the government from impinging on natural rights–not to “grant” human rights. Overturning government infringements, once entrenched, is nearly impossible, the authors later warn.

With an estimated 17 million private citizens across 50 states licensed to legally carry concealed weapons, the authors point out that a violent criminal is increasingly likely to come up against a good guy with the gun. That was certainly the case when Alexander C. Tilghman went into Louie’s Bar and Grill in Oklahoma City to commit a mass shooting atrocity. Two armed citizens who had never met before ran to their cars, got their guns and stopped Tilghman before he could harm more people.

“There is a lesson in this tale,” Gottlieb and Workman state. “If your twisted plan is to open fire in a crowded theater, big box store, restaurant, shopping mall or some other public place, the odds are gradually increasing that waiting for you in some part in that crowd of would-be victims is someone to stop you.”

They synopsize data from the annual FBI uniform crime report indicating that handguns are overwhelmingly the most common firearms used in self defense, more often than shotguns and rifles. The report indicates that between 2012 and 2017 armed private citizens killed more than 1,500 attackers who were committing felonies, the authors cite. Most of the “good guys with guns” avoid notoriety, as did the man who was having his morning coffee at a store he frequents, when a mentally disturbed man with a history of substance abuse “rushed through the doorway and immediately begin swinging a large hatchet.” The coffee-drinking patron carries a pair of .357 revolvers and brought the attack to a swift stop. Had he not been there, the store owner could have been maimed or killed. The incident was cleared quietly by law enforcement and attracted almost no news media coverage.

Gottlieb and Workman dedicate a considerable number of pages to countering spurious gun control arguments, hyperbole, exaggerations and falsehoods. The entertainment news media’s suggestion that gun owners talk big but are rarely able to stop crime with the guns they possess receives a thorough debunking as Gottlieb and Workman cite news story after news story about armed citizens defending themselves, stopping intruders that violate their homes, saving neighbors from attack and preserving the lives of family members as well as people to whom they are not related and in some instances, had not previously met.

Authorities of every stripe are quick to discourage citizens from taking action on their own, the authors comment, citing a Missouri case in which several armed citizens came to the aid of a law enforcement officer who was attacked by a prisoner during an escape attempt. Law enforcement publicly expressed appreciation for the help, but the spokesman added, “I am not advocating that people feel the need to intervene in a situation at this level.” Still, when faced with death or injury to another person, good guys with guns often do intervene. Gottlieb and Workman cite similar stories from AZ, OH, UT, GA, IN and FL in which armed citizens stepped in to save law enforcement lives.

The authors analyze statistics about private citizens using guns to defend against home invasions, as well as use of guns by store owners and their clients to defend against criminal attack at a place of business. They start this train of thought by citing a study of criminals in prison of whom 40 percent related that they had been dissuaded from initiating a crime because they knew their victims had guns; 69 percent reported “knowing other criminals who had been frightened, shot at or wounded, or captured by an armed citizen/intended victim.”

There is an interesting subsection about armed citizens shooting thieves who are trying to steal their cars. The careful reader will recognize examples in which the thief threatened the car owner and was shot to stop the attack or to prevent injury to small children who are also in the car. Legality is cloudier if shots are fired only to prevent the thief’s escape with the vehicle. It is an important distinction, and a factor in defensive gun use in incidents motivated by theft of property but accomplished through threatening death or serious injury. Too often, news reports fail to make the distinction between defending against immediately threatened deadly force and defending mere property.

Chapter 6 ties up a theme the authors have been building up to in preceding chapters–the fact that when armed citizens intervene to stop a crime, their actions are often censured, with suggestions that shooting was unnecessary despite the violence with which the criminal initiated their crime. The term “vigilante” is wholly inappropriate when applied to an armed citizen’s intervention, they stress, citing story after story in which the news media, authorities commentating on the events, people involved, and even the families of the criminals are quick to criticize decisions that saved lives from a violent attacker. About the best you can hope for is the descriptor “Good Samaritan,” Gottlieb and Workman state. When a violent criminal is killed, even to stop the most despicable crime, the man or woman who shoots will be asked to show that extraordinary circumstances required an immediate response, with no time to wait for police. Even then, law enforcement authorities will likely take to the airwaves stressing, “This is not something that we condone and we don’t ask anyone in the community to do this.”

Gun free zones, especially schools, attract psychopaths who want to run up a high body count, the authors continue in the next chapter. The fervor to maintain gun free zones defies logic and common sense, and the ideal of the Gun Free Zone is like an article of faith to its most avid proponents, Gottlieb and Workman suggest. To the contrary, they assert, gun free zones pose an incredible danger and should be eliminated, quoting John Lott, who has said, “Gun free zones are magnets for murderers.” As proof, they cite murders in theaters, malls, medical centers and municipal buildings, all of which were posted No Guns Allowed.

In a chapter about the legal aftermath of a self-defense shooting, the authors begin by noting that “no charges will be filed” are welcome words to the survivor of self defense. After stressing the importance of understanding the many variations on use of force law seen in one state’s laws compared against another, they suggest through illustrative stories that armed citizens’ defensive gun use falls well inside the legal allowances and the vast majority of the time criminal charges do not result. For further study, Gottlieb and Workman suggest, Google “no charges filed after shooting.” They close this chapter with a shout out for three post-incident support organizations, and the Network appreciates being included in that short list.

A chapter about training quotes both Network Advisory Board and beloved instructor Massad Ayoob about training for responsible armed citizens. Ayoob explains that a key element in his classes meets the need for gun owners to have “a full understanding of the laws that allow them to protect themselves and their loved ones.” Additional rationale for training is offered by Network President Marty Hayes and Gunsite Academy CEO Ken Campbell. Both are quoted about the interaction between skill with weapons and the mental preparedness necessary to employ firearms for self defense. Armed citizens don’t undertake training “to learn how to kill...they [do so] to learn how not to be killed, and how to survive an armed encounter,” Hayes told the authors.

Through all 175 pages Good Guys with Guns holds true to its title. Although composed of many facts that disprove the assertions of gun control advocates, the book’s lessons are illustrated by story after story of armed citizens of all ages, races and genders who saved their own lives or the lives of others by fighting back with legally owned firearms, all focused on the reason for the right to armed self defense.