by Marty Hayes, J.D.
Our recent foray to the SHOT Show was notable by my lack of excitement for it. Of course, this was my 21st SHOT Show, and I have seen many, many AR-15s (or whatever they are called nowadays) along with goofy products that have no real purpose other than to sell to people who think they need them. But, the show held a few rays of light, in that I was able to meet and great several of our members, affiliated instructors and corporate sponsors. I had a good conversation with friend Tim Wegner of Blade-Tech, talking mostly about hunting and fishing. Nothing wrong with that! I ran into Ashley Emerson from Garrett Cartridges and we discussed more hunting. Ashley is the guy we hunt pigs with on his TX hunting lease, when we can. It doesn’t look like we will get to go this spring or summer, but perhaps our fall schedules will open up. 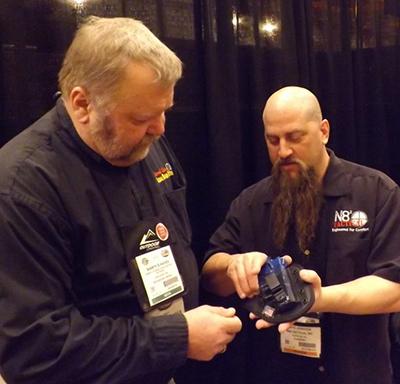 I asked him how it worked and he showed me. The picture shows Nate trying to pull a dummy gun out of the holster, but it simply would not let go until he gave the gun a slight twist and it popped free.

Nate gave me a holster to try out, so I will teach with it for a good shakedown one of these days. I did wear it driving home from Las Vegas and found it by far the most comfortable inside the waistband holster I have ever worn. You can see a picture of it in my lead article.

I spoke briefly with COR-BON Ammunition President Peter Pi, who is a Network corporate sponsor as he was literally rushing off to a meeting. Instead, I sat down and talked with Michael Shovel, National Sales Manager for COR-BON. 23 years ago, when I was a distributor for COR-BON, I attended SHOT Show as a company representative. At that time, I never dreamed I would be doing what I am doing now! 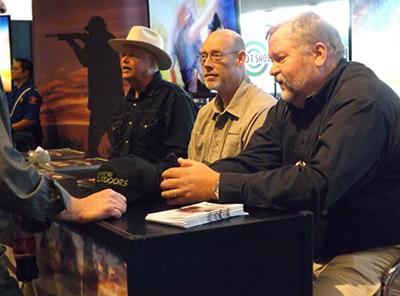 Thursday night, the TV show I appear on, The Best Defense, won a Golden Moose Award for best Shooting Show on the Outdoor Channel. This is a big deal at The Outdoor Channel, and is the culmination of seven years of hard work raising the quality of the show each season. I would have loved to have been there, but already had a dinner meeting planned. I will plan on going next year, though, just in case! Shown above is an Outdoor Channel autograph event with Michael Bane, Michael Janich and me, which was held on Thursday, prior to the awards.

All the visiting was fun, but the real highlight of my SHOT Show week was chairing my first official Network Advisory Board meeting. We brought together all the Advisory Board members except for one, who was nursing a sick significant other and could not make it. Imagine sitting in the boardroom with a group of people who together, represent over 250 YEARS of collective experience in the firearms/law enforcement/use of force/legal issues fields! We had many spirited discussions about a number of aspects of Network operations, while sharing stories from the legal profession, law enforcement and firearms training.

Readers who have not yet joined the Network need to understand the extraordinary power our Advisory Board’s (See http://armedcitizensnetwork.org/defense-fund/advisory-board) expertise and experience bring to the team on which members can call for legal defense help after a self-defense incident. With so many aftermath plans and programs now available, we believe our advisory board sets us far above the competition.

In closing, I am looking forward to representing the Network in Memphis at the RangeMaster Tactical Conference in a couple of weeks, and seeing all the Network members who go to the conference yearly.