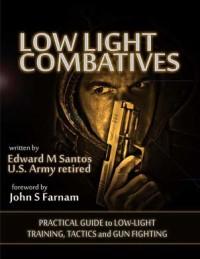 In 2007, Ed Santos published his book Rule the Night Win the Fight, but later concluded that he had only scratched the surface, he writes in the introduction to his follow up book, Low Light Combatives. He spent the next five years in further research, gathering anecdotal reports about low light confrontations, and refining what he had already written. Is the subject complete now? Santos writes that he doubts it, because every time someone is involved in a low light use of force incident, there are new lessons to be learned.

Those lessons join with the tactics and methods taught in his original low light book and still the learning process is underway, Santos writes, “…every real world low light gun fight brings a deeper understanding or situational perspective that must be examined.” With that in mind, I was eager to read his Low Light Combatives and review it for this column.

Santos addresses his instruction in Low Light Combatives to law enforcement officers, soldiers and instructors. However, the private citizen should not mistake the advice for cops only, because as the first in line to defend self and family, fighting off an assailant in the dark can be required of private citizens as easily as it can to police or military personnel.

Why is learning to operate in the dark so important? As humans, most of our sensory input arrives through what we see. The brain integrates visual inputs with what we feel, smell, and gather through other senses, but remove the visual component and most people feel anxious or stressed, Santos explains. The stress is revealed through reduced performance, often decreases in speed for which there is no real reason, since the motions of drawing a gun for example, don’t require visual feedback. He gives a lot of good reasons we must become comfortable in the dark!

Santos begins his book by defining the basics of visual perception in daylight, in waning light and under conditions of darkness, explaining the transition period between full light to reduced light, as well as fundamentals of eye physiology at work under different conditions.

Operating effectively in low light requires controlling the environment, using top quality equipment, cutting-edge tactics and controlling our own responses, Santos proposes, writing at length about each factor. The psychological impact of operating in darkness is acknowledged, he explains, but he fears that the tactical aspect of low light combatives is rarely discussed.

For example, law enforcement officers are repetitively trained to watch the aggressor’s hands. In low light, an officer may aim the high intensity flashlight’s beam to illuminates the hands, when indeed enough light is produced to light up both the hands and face. Besides, he adds, putting the beam in an offender’s face takes away their visual advantage. This is only one example of the real-world experiences Santos draws upon in explaining what’s important in skills and equipment to work well without much light.

Shifting away from artificial light, Santos discusses the psychology of shooting when targets are hard to see. Visual patience requires self control to wait to see a correct sight picture, a problem arising in both classes and competitive shooting when, pressed by time and other stress factors, the shooter fires upon thinking they’ve seen an accurate sight picture, when they have not. This also happens with realistic photo targets, he continues, explaining that trainees will shoot targets depicting hands raised in surrender when pressed to quickly identify threat targets and non-threats without adequate light.

The mind fills in what the eye cannot see, he explains, and this is exacerbated in the initial moments of body alarm reaction and the resultant changes in how the eye focuses, he adds. Learning visual patience is vital to overcoming low light’s disadvantages: take time to make sure you see the sights and the target. Training and experience working in low light conditions increases confidence, and thus results in better visual patience, he concludes.

The subject of visual patience arises now and again throughout the book, and is raised later when Santos describes using flashlights to search for or identify threats, and again when he discusses common errors students make during low light training. He also defines the most common half dozen methods of operating a tactical-sized flashlight in conjunction with a pistol and writes at length about teaching low light skills. This segment contains the principles of light discipline, realistic applications of using light then moving away. Also discussed is outfitting the light with a lanyard or having other options if the off-hand is needed for weapon manipulation, as would be required if a malfunction occurred.

Working hard to remain brand-neutral, Santos discusses commonly available tactical light options, outlining the importance of the beam’s clarity and intensity, and writing about LED-type bulbs and conventional incandescent bulbs as well as various battery options. Use of strobe light options, as well as the theory behind the strobe’s disorienting effect enjoys in-depth analysis. Likewise, he critiques use of weapon-mounted lights, identifying the muzzle control problem of relying exclusively on the weapon-mounted light, but he also explains how to mitigate the problem by carrying an additional hand-held light to use for searching, observation, and other non-shooting functions.

The operator’s personal equipment and techniques meld to create that shooter’s personal system, Santos defines. These include understanding and using principles like the eye’s off-center vision ability when light conditions are poor, using lighting conditions to your advantage and to dominate your assailant, use the lowest level of light possible, applying the most light to the assailant, and more. The complex and detailed education in this segment is more than a book review can encompass—readers are encouraged to get Santos’ Low Light Combatives and digest this and the other principles taught.

This brings us to the final element in Santos book, a very compelling 23 pages analyzing low light tactical situations faced by law enforcement. Entitled Real World Diaries, in Chapter 12, the stories come from a request Santos made of his contacts in law enforcement for reports from low light situations they had encountered. He breaks each report into its discrete elements then identifies actions and problem areas and solutions.

Six incidents are studied and analyzed through the lens of the book’s foregoing lessons. Recommendations include back up equipment, and training in working in darkness in an outdoors environment and a repeating theme emphasizing the necessity of visual patience. A panicked, reactive shot is fraught with problems, including correct identification of the threat and loss of shooting accuracy, the first story underscores.

Another report underscores the importance of light discipline, when an officer approaches a burglary location with his flashlight continuously on and left burning during a prolonged chase that ended when the suspect shot him. Fortunately, the single shot hit his vest’s trauma plate so he lived.

Several other reports show the value of extensive training and taking time to evaluate the threat before shooting. We should all hope to do so well, and Santos points out that training, practice and good equipment make these results more likely.

Low-Light Combatives closes with an analysis of laser sights, self-luminous night sights, and a simple one that caught my attention, the common outdoorsman’s headlamp pressed into use navigating when light is limited and when no threat is present.

Santos has written a very comprehensive book about using artificial light in dangerous situations. Since a flashlight is such a vital element in every armed citizens carry gear, knowing when and how to use it is important. You can learn much from Low Light Combatives.

Click here to return to April 2015 Journal to read more.