Training for the Armed Citizen Pt. 3

Legal Training for the Armed Citizen

I started down the path of the armed citizen back in the 1980s after working for a few years as a police officer. When I left law enforcement, for several years I did not carry regularly, the gun being associated with police work in my mind. Nonetheless, when I needed to settle on a long-range career plan, I ended up going into private firearms instruction, having heard of companies like Gunsite, Lethal Force Institute, Defense Training International and others.

A new indoor gun range was opening in my area of metropolitan Seattle, and I figured why not give this a try? After all, I was a certified police firearms instructor already and a top-level competitor in NRA PPC. At the same time, I came to realize that regardless of whether or not I was in law enforcement, I should be carrying a gun full-time. When I got the teaching job, I needed to start planning a class curriculum, and told myself that I would not teach people how to kill, unless I also taught them when and when it was not legal to kill.

In the photo below Marty and Massad co-teach a segment of a Use of Deadly Force Instructor class taught in Washington State a few years ago.    Photo courtesy of Massad Ayoob Group. 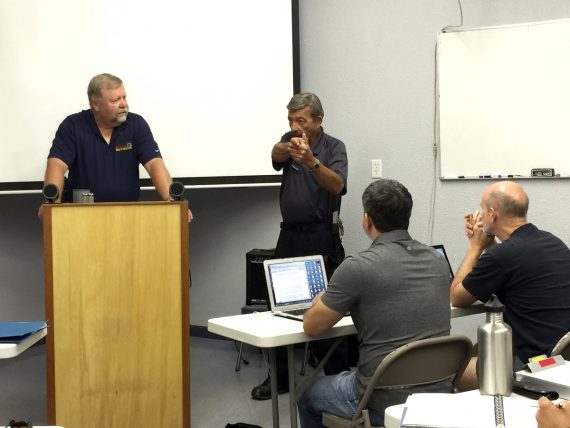 The only literature I could find on the subject came in the form of a little paperback book entitled In the Gravest Extreme, written by Massad Ayoob, a name I had followed from the popular gun magazines. The day I bought that book, I started reading it and didn’t quit until I had read it all. Combining what Ayoob had written and what I had learned from my police academy days, I put together an hour-long lecture teaching the justifying factors of ability, opportunity and jeopardy and jumped into teaching feet first. Back then, the purpose of deadly force training was to make sure the students understood when it was lawful and probably more importantly, when it was unlawful to kill someone. Today, the circumstances have changed somewhat.

Not only do you need to educate yourself as to when you are allowed and when you must not use force in self-defense, you also need to be able to discuss your legal training and show that you were following your training, if needed, in a court of law. There is an old saying in police training circles: “If it isn’t documented, it didn’t happen.” That is true because judges have great latitude over what evidence they allow into court. If the judge thinks that perhaps you and your attorney got together and concocted a story claiming you knew the law before you used deadly force, then the judge could disallow any testimony relating to what you say you knew before the incident. If you can show through documentation that you had been presented certain materials during training and that you understood the material, then any decision by the judge to disallow that testimony would be subject to being overturned by an appellate court. One of my favorite sayings regarding this comes from Washington State Supreme Court case State v. Janes, 121 Wn.2d 220 (1993) 850 P.2d 495:

There are similar rulings in all the other states, too.

This means that the defense (representing you) gets to tell the jury what you (as the defendant) knew prior to the incident, if that knowledge is both relevant to the case and is reliable. When discussing use of force training, that means it must be documentable.

So, how does someone who is not a lawyer get legal training? Well, first, being a member of the Network, you have access to many hours of legal training and that training is documentable. The Network provides all members with nine educational video lectures streamed at https://armedcitizensnetwork.org/members/lectures-on-video and Massad Ayoob’s book Deadly Force: Understanding Your Right to Self Defense.

I hope you won’t stop your legal training there. In your self-defense trial, wouldn’t it be nice to have a member of the local police department come to your trial and testify about what he or she taught you regarding lawful use of force? That is exactly what happened during Larry Hickey’s first trial, where Sgt. Brian Kowalski, who was Larry’s CCW instructor, testified on Larry’s behalf.

When you are choosing instructors, make sure the instructor knows that you would like to have the option of calling them as a material witness to testify to your training. If they balk at the suggestion, find another instructor.

Now, there’s more than just legal/bookwork training to consider. Recognizing and responding to pre-attack indicators is one subject which I believe is critical for the armed citizen to study and understand. I am talking about the physical and/or verbal cues which would lead a reasonable and prudent person to believe that an attack was imminent. During my police days, I was once investigated for excessive use of force, and it was because of my documentable training in pre-attack indicators, the local prosecutor said, in effect, “Nothing to see here, move on.” I am heartened to see many, many good trainers in the country realizing the necessity of this training and offering it, along with books and videos that are also being produced. You Tube is a great resource for some of this information. When you watch a video or read a book, take a few notes and document what you learned.

Additionally, it is critical that the armed citizen participate in decision-making scenario training. Back in the 1970s, the Federal District Court case Popow v. City of Margate, 476 F.Supp. 1237 (1979) was decided. One of the lines of that opinion read:

“The only continuing training was shooting instruction approximately every six months at a range in Atlantic County. However, there was no instruction on shooting at a moving target, night shooting, or shooting in residential areas … Furthermore, the officers viewed no films or participated in any simulations designed to teach them how the state law, city regulations or policies on shooting applied in practice.”

That case centered on the question of whether the City of Margate was negligent in failing to train their officers since there was no documentation that Margate did any training other than shoot at stationary targets. Sadly, this is still state of the art in many police departments, but you do not have the constraints of police agencies and their training policies. I first participated in decision-making scenario drills through John Farnam’s excellent training back in the early 1990s. I immediately incorporated decision-making training scenarios into my courses and continued to teach decision making until last year when I retired from teaching.

The legal and ethical principles driving your decisions in a self-defense situation are expertly taught by Network Advisory Board Member Massad Ayoob in his Armed Citizens’ Rules of Engagement training course around the country. Check his website https://massadayoobgroup.com/mag-20-classroom/ for locations and dates. While you’re on his website, also check into the Use of Deadly Force Instructor, which I’d like to talk about for a minute.

Instructor-level training in use of force for self defense is another great option for armed citizens. In the mid ‘90s, Massad Ayoob and I developed an instructor training program designed to address the deficit of training in the legalities of using force in self defense. To this day, we continue teaching together once or twice a year, offering the Massad Ayoob Group’s Deadly Force Instructor training at selected locations around the country. It is hard to imagine a stronger defense than being able to show the jury that the person being prosecuted is an expert in the discipline. Being an instructor is considered by most courts as meeting the definition of an expert. Use of Deadly Force Instructor courses are listed on the Massad Ayoob Group’s website, and I know of two that are scheduled in 2022, one in Michigan and one in Pennsylvania.

Lastly, colleague Andrew Branca’s Law of Self-Defense has been doing some excellent work through Internet class offerings and an occasional seminar. Andrew has both user courses and now also offers instructor courses in a convenient Internet-based format. I have taken the user course he routinely gives at the Rangemaster Tactical Conference, and one day I expect I will likely take the instructor training, as well. These are the only two instructor training courses that I can recommend at this time, and I warn you to be very careful as to whom you take training from, since your instructor may become a critical part of your defense team if you ever have to defend yourself in court.

This wraps up the series on training for armed citizens. I hope you enjoyed it and that you will look into following the suggestions I’ve presented.