Training for the Armed Citizen Pt 2

Tactical Training, a Key Component for the Armed Citizen 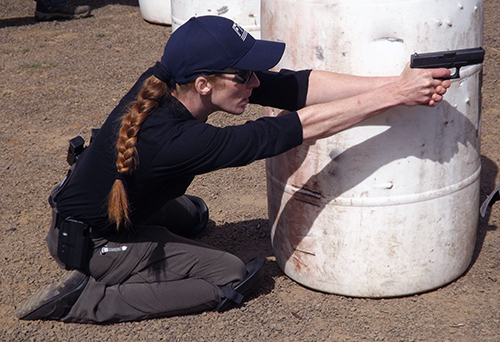 This month, we will continue our discussion of what type of training an armed citizen should get. Last month, I explained there were three types of training that I feel are paramount for the armed citizen, those being –

This month we will address the concept of tactical training.

There is a considerable overlap between the physical skills of defensive handgun training and what is considered tactical training. For example, is shooting from cover defensive or tactical? Really, it is both and the armed citizen should be well versed in shooting from cover. In the photo, above: Belle McCormack of Firearms Academy of Seattle demonstrates use of low cover. 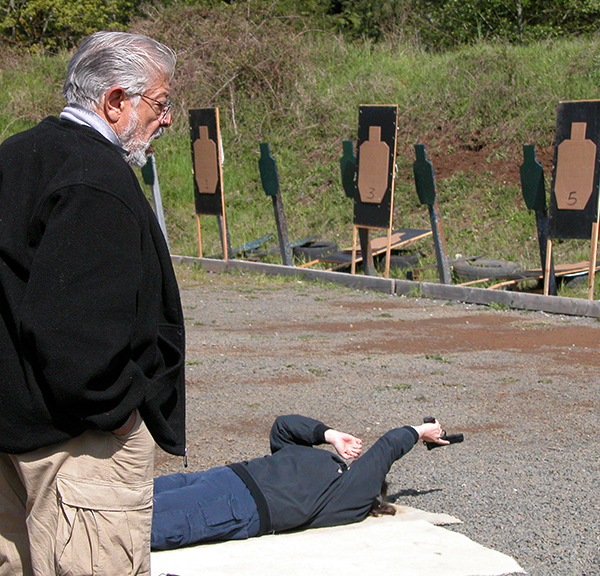 There are two main types of shooting from cover. The first is shooting from ensconced cover. When Jim Cirillo was involved in his NYPD stakeout unit shootings, he did them all while hiding behind cover. His job was to select a robbery-prone business, find a location inside that business where he and his partner could stay secluded, and if the business was hit by a robber or robbers, they would interdict the robbers while behind cover, maximizing their odds of survival. This is no different than a person setting up a safe room with protected shooting points they could get to and defend themselves if their home was invaded.

In the photo, left: Jim Cirillo oversees dryfire repetitions of his downed defender shooting techniques. I was privileged to host him as a guest instructor before his death when I was running Firearms Academy of Seattle.

Standing up behind cover is not the only way to use cover. There is, of course, kneeling and even prone use of cover. Shooting from these positions should be learned and occasionally practiced, as it makes no sense to stand out in the open and engage if you could simply kneel and hide behind something. That also falls under ensconced cover.

A second method of using cover is helpful when searching. Now, I know you don’t plan on being a one-person SWAT team, and if you had a reason to believe there was someone in your house, instead of walking blindly through your open back door and into your home, you should consider calling the cops. Assuming there is sufficient manpower left in your local law enforcement agency to send one or two officers out to check out the suspicious circumstances, call the guys wearing body armor who may even have a dog.

Perhaps no one from the local police department is available or maybe you were lying in bed and simply heard an unusual sound from another part of your home. It’s not anything you would call the cops to check out, but instead necessitates your own investigation. Knowing how to safely search your own home is a potentially lifesaving skill. Attending a tactical training course to learn these tactics is in order. Unfortunately, most shooting schools don’t have shoot-houses, but a few across the country do.

Gunsite Academy, Thunder Ranch and The Firearms Academy of Seattle all do. Called simulators, they simulate an environment where there is a problem to solve and give the student a chance to practice solving those problems. If traveling to one of these schools is out of the question for you, you might want to consider hiring a local instructor for an evening to come to your home and take you through the tactics and skills for searching your own home. That would be a good start.

Learning proper search techniques is valuable outside your home. In an urban environment, knowing the best way to negotiate a street full of buildings so you are not easy prey, or if you are a hunter, even using slicing-the-pie search techniques can make you a more successful hunter. One of Gunsite Academy’s most eagerly anticipated exercises takes place in their outdoor simulators. There, you must negotiate rough terrain while looking for and engaging “bad guys.” Learning proper search techniques and how to shoot from behind cover is probably the most valuable tactic to learn after you have learned shooting skills.

Below, right: Gunsite Instructor Erick Gelhaus, shown at the very back of the scene, coaches one partner in this couple’s two-person building clearing simulation during Gunsite Academy’s Team Tactics for Two class. 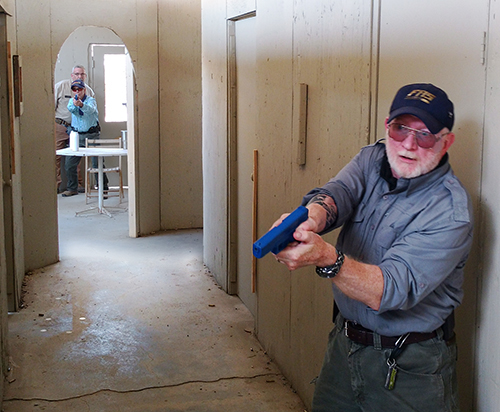 Solutions to other tactical problems are best learned through “force-on-force” training. More and more schools are offering courses which are either all or at least heavily weighted to “role playing.” In police training, where the discipline started, it is called “mock scenes.” The idea is to place the rookie in replicated scenarios, where the young cop can either solve the problem correctly and get positive feedback from his instructors, or they “screw up” and see where they did wrong. Ideally, the trainee is then given the chance to repeat the scenario and get it right. I can still recall the scenarios from my initial police academy days, over 40 years ago! No one around you puts on force on force classes? Call Karl Rehn (https://krtraining.com/) who runs his own school out of Texas and would likely be willing to come to your area and put on a class. I would rate his training as among the best there is for force on force. In addition to Karl, there are other instructors who could do this for you. Do your research.

A third area of skill that I lump into tactical training is learning how to run your gun from all kinds of disadvantaged positions and circumstances. Techniques addressing this concern were pioneered by Jim Cirillo in his downed officer course, his seminal work in this area, called “Downed Defender” drills, has blossomed into being taught by Massad Ayoob and others. Shooting from your back, your stomach, one handed and then learning how to manipulate the gun both one-handed strong handed, and one handed weak handed is a very reassuring set of skills to have. It is likely that you would not need these skills in your next gunfight but these things would be nice to know how to do ahead of time, not trying to figure out how while someone is trying to kill you.

Lastly, there are “decision making” drills in which armed citizens should participate. They can be as simple as facing a paper target and trying to decide if the target needs shooting, to needing to work out angles of fire and priorities of engagement in a simulated active shooter scenario. One of the best classes to tap into for this is offered by Col. Ed Monk (Ret.) of Last Resort Training. I hosted him as a guest instructor when I was running the Firearms Academy of Seattle, and he still comes to FAS to teach occasionally. In fact, he will be here in a couple of months https://firearmsacademy.com/handgun/em-active-shooter-threat-response.

As you can see, there is a plethora of tactical training disciplines in which one can immerse oneself. Frankly, I don’t think you can overdo it. Next month, we will wrap up this series with a discussion about the legal training in which armed citizens should participate and why it is important.