We’ll Be Back:
The Fall and Rise of America

With the primary elections stirring up all manner of hate and discontent, I sought a book to help get me through the long, fractious months leading up to the general election. Will freedom-lovers regain a little clout in congress? What will happen at the state level? Will it make enough difference to salvage or even perhaps regain some of the liberties we have lost? On a whim, I decided to buy We’ll Be Back, released in July by retired Army infantry colonel, Los Angeles trial lawyer, columnist and fiction author Kurt Schlichter. Although I follow his columns on Townhall (https://townhall.com/columnists/kurtschlichter/), I read neither dystopian nor action thriller fiction so I had not yet read any of his books. I was surprised to find some optimism in a book that suggested mostly pessimism. 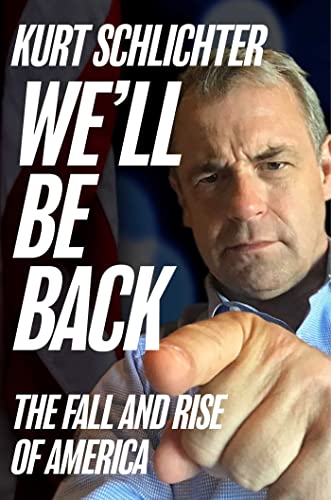 As the title suggests, Schlichter explores the path for a return to national strength and prosperity. He does not promote armed revolt and emphasizes the high, irretrievable costs of civil war. Instead, he suggests through possible scenarios and comparisons to the fallen Roman and Weimar republics how our future could play out. He observes that America’s founding fathers were inspired by Rome’s “Republic based on the notion that a polity was to be governed by citizens within a procedural framework that protected individual rights,” and saw, perhaps, in the evolution of Rome a mirror image of “a nation of sturdy farmers, obsessed with honor, unbelievably stubborn and tough, creative but also willing to learn from others.”

Unfortunately, Rome’s success led to its disintegration, he warns, noting, “prosperity changed Rome forever…and within a few decades the republican virtues that had sustained Rome’s rise were being discarded with astonishing regularity.” Whether the year is 300 A.D. or 2022, change is unavoidable and Schlichter writes, “We need to understand that America will fall, in the sense that at some point—and it may not be in our lifetimes—it will morph into something different.” He adds later, “It is cold comfort to observe that even as bad as things are, America has not quite yet hit bottom; the left is fully prepared to hit bottom and then keep digging.”

Do not underestimate the hatred the left harbors for individual success, he later explains. “‘If you are prosperous, the left cannot buy you, and if you are free, you will not choose subservience.” The left thrives on misery because “through the struggle it accumulates and exercises power,” so sees no upside to individual prosperity. Not that the leftist elite suffers; deprivation is for the masses. The result? A lot of normal people are furious about the lies and corruption, unavailability of basic supplies, job losses to overseas labor, and looting, burning and rioting that reveals the incompetence of “our ruling caste.”

Don’t read We’ll Be Back expecting a screed against liberals and Democrats. Schlichter has plenty of harsh words for both political parties for mismanaging the war in the middle east, disastrous foreign policy decisions, economic incompetence, and for intentionally inflaming hatred between people of differing beliefs. He defines the opposing ideologies: “Unlike the left, we do not seek to remake society into something new, but rather something old and proven by time. The Constitution, and all it entails, is the key.”

Nonetheless, both parties have contributed to the massive administrative state that, Schlichter observes, runs on “a wink and a nod of support from the political branches that are happy to let faceless bureaucrats take the heat for the inevitable screw-ups of governing.” Still, the left seeks more “power via the force of government” and subverts the Constitution’s limits on government. If they prevail, he writes, we’ll lose the Republic and end up ruled by “the new elite” bent on “crushing and looting internal dissenters.”

He explores the various checks and balances implemented by the founding fathers, noting that a certain amount of injustice is just part of life, so the question must be not whether a single individual’s rights were trampled, but the scale of the injustice. Even the worst outrages in our past didn’t “justify armed insurrection against the government of the United States,” he writes. “The reason is that these violations of basic human rights could still be, and eventually were, addressed by the processes within the Constitution. You don’t fight when you can fix it some other way.”

He writes later that before armed revolt, “there has to be a point when someone decides that he has nothing to lose...that your life as you knew it is essentially over the second you pull a trigger...if you pull the trigger at a fed and it does not turn into a successful revolution, you are done. Your life is over. You are going to jail forever; at best, you will be hunted forever. The second you take up arms, everything changes and your life is never going to be the same,” he writes, adding, “This is a good thing. We want to discourage this in all but the direst situations. It sets the bar appropriately high for the shot heard ’round the country.”

Having dismissed armed revolution as a fruitful option, Schlichter imagines how a negotiated separation into two nations might play out. An informal separation is already underway with conservatives moving out of liberal states; why not get a divorce? he asks. Approach with caution, he continues, citing the Balkans as a caution. “Yugoslavia’s breakup devolved into a massive civil war...If we wished to divorce, we should carefully review how they broke up Josip Tito’s territory and then do the opposite.”

He believes the breakup of the Czech Republic and Slovakia in the early 1990s better illustrates “successful,” meaning bloodless. I raised a skeptical eyebrow, wondering if the strategy scales up to so land-rich a nation as America. Schlichter further ponders how to divide the United States, acknowledging that our liberal bastions are not contiguous. Every “red” state has “blue” enclaves. Do you eject those of different political bent? We condemned “ethnic cleansing” in the Balkans, so “In all likelihood, a national divorce simply is not going to happen, unless the violence threshold has already been crossed, in which case all bets are off,” he admits.

Is there a solution within our existing political structure? Schlichter discusses possible outcomes if the 2024 presidential election puts a truly conservative Republican in the White House. Expect the left to sponsor violent protests and riots to test the mettle of the president to prove whether he, like Lincoln standing firm during the dark times of the Civil War, will enforce the Constitution. A truly conservative president will tread the fine line between “playing hardball” without “willful rejection of the checks and balances that the Constitution envisions,” as he struggles to get the nation back on track.

Schlichter outlines international troubles looming on America’s horizon as military effectiveness declines and we rack up ever more debt to China, to name only two big dangers. While war with China would extract a high cost in lives lost, Schlichter believes we are more likely to borrow-and-spend America into obscurity. He suggests our nation could fade or crumble as apathy builds, we abjure aggression, risk-taking and sacrifice independence, church attendance drops, we view the national debt as something for later generations to deal with, we burn through trillions with impunity but have little to no infrastructure improvement to show for it, and we keep on paying people not to work. He warns, “The multiple trends that lead to slow decline—economic malaise, cultural exhaustion, and the infusion of outsiders—are not unusual or unprecedented. Rome finally fell—the big fall, with the subsequent Dark Ages—after these trends had gone on for hundreds of years.”

What would it take to turn the nation around? “To recreate a vibrant civilization and snap out of decline, you would need a societal purpose. How would that get turned around? Perhaps it could be, but it would take a grassroots movement, like a Great Awakening, because it could certainly never be imposed from on high by the current elite.” Schlichter continues a bit later, “We need a new kind of conservative Republican, one unafraid to exercise power, one not restrained by arbitrary conceptions of what a conservative Republican can do, but still aware that to rebuild America for the long term we cannot succumb to the expedient of true authoritarianism in the short term.”

The book’s closing chapters read like a recruiting document to “hire” a new president who isn’t afraid to destroy the old, worn-out institutions, is immune to the lies and mis-characterizations sure to be spouted and who comes into office with their own strong network so the presidential appointments aren’t just handed out to establishment favorites, a mistake Schlichter says plagued Donald Trump. That all, of course, also depends on our willingness to address election fraud, a fight we failed despite ample evidence in 2020.

Overall, We’ll be Back turned out to be optimistic, but tempered by a strong dose of reality. Schlichter writes, “I believe America will rise again, albeit with scars. What has happened in the last three decades will leave a mark. All the norms that were shattered cannot be pieced back together again so easily. The rules we thought we had agreed upon about personal freedom, property rights, and the relation of government to citizens have been rewritten for short-term convenience. They will not go back to what they were.”