How do wrongful convictions occur in a criminal justice system as extensive as that of the United States of America? Some posit that prosecutors and police fail to thoroughly investigate, do not correct their mistakes, and at the extreme end of the speculation, we hear accusations of evil, malice, greed, slothfulness and other evils.

Author Mark Godsey, himself a Federal prosecutor for many years, gives an insider’s view of the resistance common to prosecutors and police when presented with evidence that the wrong person is locked up. This former prosecutor, who in 2003 joined Ohio’s then-new Innocence Project, writes knowledgeably about issues like confirmation bias, cognitive dissonance, memory, eyewitness errors, tunnel vision, threats to status quo and positions of authority, political pressures and other “flaws in the human psyche” that cause “police officers, prosecutors, judges, and defense lawyers to behave in bizarre and incredibly unjust ways without being aware that they are doing so.”

He later adds that, “All of us would act in similar ways were we in their shoes, without the proper guidance and training” and encourages readers to understand and combat “our human limitations—our psychological flaws and the structural, political flaws of our system,” to practice humility and convert the criminal justice system to “a true system of justice.” 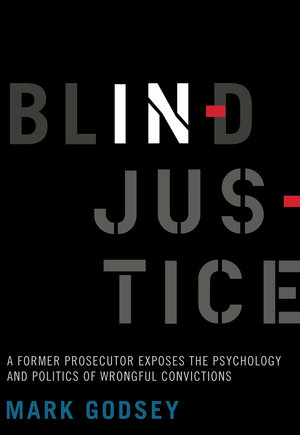 When humans have to interpret evidence, pre-established beliefs are hard to override, resulting in confirmation bias. The problem is “pervasive,” Godsey writes. Juries suffer from confirmation bias, as do police, prosecutors, defense attorneys and witnesses. Forensic sciences are surprisingly subjective, he adds, and preexisting beliefs about desired outcomes influence interpretation of smeared fingerprints or distorted bite marks, tire tread comparisons, handwriting expertise, and other purportedly scientific analysis, he illustrates.

“Faulty eyewitness identification testimony—caused by errors in human perception and memory—is the single greatest cause of wrongful convictions,” Godsey notes, in a chapter about how easily memory can be modified by outside suggestions or self-image corrections. Deliberate lies are excluded from the estimate, and cases cited entail genuine belief that the version of events to which the witness testified really happened. Witness “memories may be nothing more than a contaminated collection of past memories and expectations that their brain used to fill in the picture so that it could focus on more important things,” he explains. The longer the time between the experience and the retelling, greater the likelihood of “forgetting and incorporation of inaccurate information,” he adds.

Once an initial suspicion has taken root, people experience a form of tunnel vision that excludes any facts not supportive of that first conclusion. We “become wedded to that belief, and then interpret or even twist all subsequent information we encounter in order to confirm it,” Godsey observes. As a prosecutor, he admits, that he and his colleagues sometimes adopted mere theories as “proof beyond a reasonable doubt.” Prior to prosecution, similar tunnel vision leads law enforcement to ignore evidence that suggest their initial suspicions are incorrect, too, he notes.

Even defense attorneys sometimes doubt their client’s innocence, he adds. “In my work with the Ohio Innocence Project, I cannot count the number of times when, after we have opened a case and begun reinvestigating it, I have called the client’s original trial attorney to seek information about the case, only to receive a condescending laugh and a comment like, ‘…That guy is totally guilty.’ When I have then asked them how they had investigated the case…the answer is often, ‘No. I didn’t do any of that because it just seemed clear that the guy was guilty. I’m not gonna ask the judge for funds for investigators and stuff like that in a case where he’s so obviously guilty. I’d get laughed out of court.’”

Participants in organizations tend to honor accepted practices over the dictates of conscience, Godsey writes. “Humans act differently, and less justly, when they are part of a large system that diffuses responsibility and creates certain bureaucratic mindsets. Such behavior is inevitable to some degree, and sometimes even necessary,” he admits. He later discusses a related tendency he dubs “noble cause corruption,” that arises when the criminal justice system turns a blind eye to or expects members to participate in acts like hiding exculpatory evidence, pressure filled questioning that suggests the desired responses and other misdeeds because they believe they are “fighting for a righteous cause.”

Partisan politics, campaign advertising, funding and the need to be seen as “tough on crime” to win election sways judges and prosecutors alike, Godsey continues. He criticizes the practice of elected prosecutors endorsing judicial candidates, and comments that in his state, it is sometimes impossible during elections to remember that the judiciary and prosecution represent different branches of government and are supposed to act as counter-balances.

An unbiased jury is the answer, right? Godsey disagrees, citing the extreme disparity in resources available to most appointed counsel compared against funding available for the prosecution. In addition, jurors want to convict someone for heinous crimes, empathize with victims, and find it difficult to “truly embrace the presumption of innocence,” he quotes federal appellate Judge Alex Kozinski.

Godsey goes on to debunk the popular opinion that jurors naturally distinguish truth from lies. “In reality, we are pretty bad at measuring truthfulness from watching another person’s demeanor or listening to their voice as they recount their story. The things we accept as barometers of truthfulness, such as steady eye contact and confidence, are simply not good barometers. And things we accept as indicators of dishonesty—appearing nervous, fidgeting, a lack of eye contact, or a cracking voice—are not great indicators of lying. These are just notions we have been taught and have accepted as they have been handed down for centuries—folklore—that are now refuted both by new understandings of human psychology and by the simple facts about human error brought out through the innocence movement,” he comments.

“The system then relies on the jurors as human lie detectors to sort out the mess and determine which side’s theory is right, with many jurors tending to start with a preexisting bias in favor of the prosecution. And with the defense operating at a serious disadvantage in terms of resources, often without investigators or experts to back up its competing theories. That’s just how our adversarial system works,” he later adds.

Blind Injustice is a pretty grim book until about the three quarters point when Godsey begins to suggest solutions. “We need to recognize that the criminal justice system…is comprised of human beings and is deeply infused with the psychological flaws that humans bring to it. We need to embrace our humanity and not be afraid to acknowledge and mitigate human error. In other words, we need humility and the ability to accept our human limitations,” he introduces, calling for “structural and procedural changes in the criminal justice system to compensate for our psychological flaws.”

Key suggestions for change include:

Citizens need to acknowledge the risks the current criminal justice system entails, Godsey warns, explaining, “The public is happiest when their public officials flex their law enforcement muscles and convince them that the occasional wrongful conviction is a great aberration that could never happen to John Q. Public. That’s what the public wants to hear, and they believe it. Until it happens to them.”