When Deadly Force Is Involved

A Look at the Legal Side of Stand Your Ground, Duty to Retreat, and Other Questions of Self-Defense
By Bruce M. Lawlor
Rowman & Littlefield Publishers
$36 at https://www.brucelawlor.com/draft

The author of the book reviewed this month retired from the U.S. Army as a Major General, has taught at the U.S. Army War College, and was the first U.S. Department of Homeland Security Chief of Staff. Before his military service, he was a trial lawyer with extensive experience in civil and criminal litigation, including cases involving self defense. He is certified as a firearms instructor and has conducted research on the use of small arms and the rules of engagement for military personnel operating in heavily populated, civilian environments. I was extremely interested in Bruce Lawlor’s views on self defense, because his background is so different from the authors I usually read. Would When Deadly Force Is Involved be highly technical, like reading a compendium of state laws? I was pleasantly surprised! 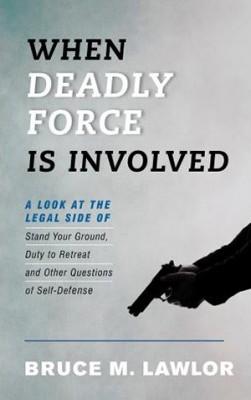 “Self-defense, as a legal concept, is easy to describe, difficult to apply,” Lawlor introduces. “Generally, a person who is without fault may use force, including deadly force, to defend against what he or she reasonably fears is an imminent unlawful threat of death or serious bodily injury, provided there is no reasonable alternative to avoid it.” Instead of exploring the right to use guns in self defense, this book studies the legal aftermath and teaches a legal framework from which to understand the structure of our laws.

When Deadly Force Is Involved focuses on prosecutions, verdicts and retrials of defensive gun uses. In each of 15 interesting chapters, Lawlor delves into “a specific issue related to self defense, and describes how judges and juries go about deciding what to do.” He creates scenarios based on self-defense cases he has studied over the years, focusing on “The legal reasoning...what was decided and why it was decided,” to show what case facts resulted in verdicts against armed citizens, to help the reader “better understand how specific questions relating to claims of self defense are answered.” Each chapter wraps up with citations of various cases from which Lawlor drew the scenario and his discussion of the legal outcome.

Much is taught about how, to be justifiable, deadly force must be reasonable and necessary. Applying the concept of reasonableness to various circumstances is a repeating theme throughout Lawlor’s book. He defines, “Necessity provides the legal justification for self defense, but it can’t exist without reasonable behavior on the shooter’s part,” briefly identifying that behavior as–

“In short, the need for reasonableness permeates every part of a self-defense claim,” he sums up.

He comments on ways reasonableness is judged, whether through an objective inquiry into what a prudent person would believe or do under the same circumstances, or a subjective standard seeking to determine if the shooter sincerely believed innocent life was in imminent peril. He later explains that, “At the heart of every valid self-defense claim is a reasonable fear, held in good faith, that imminent death or serious bodily injury is about to befall a person if he or she doesn’t act immediately to avoid it.” Most states, he continues, ask juries to determine what a reasonable person in the same circumstances would conclude. A small fraction of states ask juries to “look at the facts through the eyes of the shooter to determine, based on what he or she perceived, whether it is reasonable to believe that deadly danger was present.” While thedistinction seems minor, the result is not, he shows.

Variations, he comments, reflect “the community’s belief.” This approach is “not unique to self-defense cases,” he adds, explaining that state legislatures passlaws that “reflect local values, customs, and traditions.” Lawlor calls this complexity, “a reasonable price to pay for living in a federal system of governance that allows fifty different state legislatures to have a voice in saying what is fair for their citizenry.” As an example, he cites duty to retreat laws. This is illustrated again in another chapter explaining stand your ground laws, and in another discussing how lethal force in defense is allowed more readily inside the home than outside, and how rules about curtilage vary from one state to another.

Lawlor illustrates the aspects of intent, innocence and immediacy in early chapters. Because each principle is introduced by a story, the human factor of how juries view the actions of their fellow citizens is highlighted, giving the reader much to ponder. Discussing the role of innocence in proving a claim of self defense, he outlines injudicious behavior that forfeits the right to self defense, stressing, “A person who provokes a confrontation, prolongs an encounter, or contributes to the circumstances that lead to another person’s death may not later claim the killing was necessary.”

In a section subtitled Hostile Words and Threatening Behavior, Lawlor warns against verbal escalation of a conflict, but addresses the other side of verbal threats: how what is said contributes to determining if your life is threatened. Here, as in earlier pages, he explains that along a continuum of actions spanning utterly harmless to extremely dangerous floats what he calls a “crossover point where non-life threatening behavior becomes deadly.” He discusses shooting when a furtive movement coupled with verbal statements of intent to kill makes deadly danger appear imminent. It is a complex chapter, but well worth the time to read several times to fully grasp the principles.

Lawlor also illustrates defending against threats that turn out to be false, like an unloaded gun brandished when the victim does not know it is unloaded. He teaches the doctrine of transferred intent applied to mistaken shootings of someone who is not an immediate, deadly threat, illustrating through stories what mistakes might be reasonable and which would not be, what a jury might be allowed to consider and what would be excluded by the judge. “When mistakes are made in self-defense shootings the determining factor is whether a reasonable person, in similar circumstances, would have made the same mistakes,” he stresses.

Other chapters cover how the Castle Doctrine affects court decisions (its application is not as straight forward as you may have believed), and another explains de-escalation and withdrawing from mutual combat and what steps are required to regain the right to claim self defense. He outlines cases in which armed citizens left places of safety to confront danger, concluding after one case study, “Leaving a place of safety to engage an adversary...contributes to the circumstances that lead to the victim’s death, and for that reason the shooter forfeits the right of self defense.” On the other hand, he explains that Supreme Court rulings affirm that possessing a gun to defend against anticipated danger is lawful, that Americans are not prohibited from going to unsafe places where they are legally allowed to be, so long as their behavior remains within the constraints of the law.

The lessons are detailed, and important to understand; readers should get a copy of When Deadly Force Is Involved and set aside the time to study and learn from it. In many of the cases Lawlor discusses an appeals court concluded that the original trial court erred and ordered a new trial. Before cheering, “See, I knew it was OK to do that,” bear in mind that the people in his examples had to endure the first trial, get an appellate court to acknowledge that sufficiently severe errors to merit a retrial were made during the first trial, then enjoy better luck on the redo, despite the State already knowing all of the defense’s arguments and strategizing how to beat you.

Beyond a deeper understanding of the American justice system, the best lessons in Lawlor’s book are how the people in his stories wandered into dangerous legal territory, misjudged situations and were charged with a crime. How much better it is to learn from the mistakes of others, and avoid the problems altogether! The book’s closing pages contain a valuable eight-page bibliography, followed by an 18-page index of topics taught in When Deadly Force is Involved.