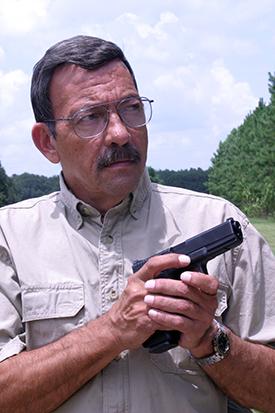 Law abiding citizens work hard to know the law and operate within its limits. Sometimes, though, when the law is silent on an issue, Network members are not sure what duties are required, and never is that truer than in the question of when, why and how verbal warnings should be issued before shooting. I have long said that the Network is not in the business of teaching tactics, to which some have retorted that what to expect from the criminal justice system after a use of deadly force incident influences their tactics. With that in mind, we engaged internationally recognized firearms and use of force instructor, expert witness on use of force matters and Network Advisory Board member Massad Ayoob in a discussion of verbal warnings within the context of a self-defense incident.

eJournal: Members have asked whether they have any duty to give verbal warnings during use of force in self defense, and how to balance that against any tactical disadvantage suffered by giving away one’s position or other factors like revealing possession of a firearm. It is a difficult question from a legalities viewpoint, because there simply is not statutory law speaking to any such requirement.

Ayoob: I don’t think you are going to find anything in the case law, either, nor in the instructions to the jury. It is going to come under the totality of the circumstances.

I admit I was struggling to come up with a topic to write about this month, and then all of a sudden, I got a phone call. Problem solved!

The phone call was from one of the Network’s Affiliated Instructors, Jay Okimoto, the director of Crosswalk Readyness, Tucson, Arizona. He was calling to invite me to speak at a gathering of over 200 people, many of them not necessarily gun owners but instead, self-reliant people, who live in and about rural Northern Arizona. Typically, I would not have the time to travel so far to such an event and at such relatively short notice, but as fate would have it, I will be attending Gunsite the prior week, and the Family Preparedness Training event, sponsored by Crosswalk Readyness and SHOTS Ranch to benefit Oath Keepers (http://oathkeepers.org), is being held just two hours away from Gunsite! So, not only am I accepting Jay’s invitation, but I also wanted to invite the Network members who live in the area to come and check it out, listen to me talk about self-defense law and aftermath issues and take some other pretty cool training seminars.

For years, reputable firearms instructors have always preached that “guns and grass don’t mix,” but today some people view marijuana the way that most of society views alcohol. The fact is that the federal government does not recognize any state form of legalized marijuana. Understanding this dichotomy is important for armed citizens because the casual nature of marijuana use in many parts of the country has given rise to the attitude that an otherwise responsible law abiding citizen cannot get into trouble by possessing or using marijuana.

Use of deadly force in defense of others is the topic we are currently discussing with our Affiliated Attorneys. Here is the question under discussion—

Under your state’s law may someone (not personally threatened with deadly force) use deadly force to stop the in-progress and/or imminent commission of certain crimes? What crimes? Must the crime actually be occurring or imminent, or would deadly force be lawful if the intervenor only believed that one of such crimes was occurring or was imminent?
So many affiliated attorneys responded that we needed three installments to present all of their commentary. This is the third and final installment.

The lawful use of force in Washington State is governed primarily by three statutes: RCW 9A.16.040, which regulates use of a deadly weapon by a public officer, peace officer, or person aiding a public officer or peace officer, RCW 9A.16.020 and 9A.16.050, which regulate the lawful use of force by a civilian. For the purposes of this month’s question, I will focus only on the latter two.

Why do we invest so much into learning how to defend against aggression but so little on prevention? This is the challenge with which author Steve Tarani starts his book PreFense®. “Instead of spending so much time and effort planning a response to an incident why not expend the same preparatory resources to avoid those situations in the first place?” he asks.

Tarani’s viewpoint, encompassing security issues he addressed during 25 years with United States defense, intelligence and law enforcement agencies, is much wider than most. Struck by how little people know about threat avoidance, while a government contractor Tarani volunteered to develop programs he called “proactive protection” for people in high-threat situations. In his book’s introductory pages, he writes that he was so drawn to this mission that he eventually abandoned the security of federal employment and set to work distilling forty years of training and experience into a system he called Preventative Defense, or PreFense®.

August was a big month for distributing copies of our Foundation’s booklet What Every Gun Owner Needs to Know About Self-Defense Law to Network affiliates all across the country. It is always enjoyable when affiliates have a few minutes to share a little about their activities. Passing along details about their schools helps members know who is working in the various regions all across the nation, so in this column we try to excerpt a sampling of our affiliates’ news. Since we heard from so many affiliates in August, this column will run long this month.

Lateif Dickerson, came into the Network in April of 2008 and is one of our earliest affiliated instructors. He is still going strong and giving Network materials to his students.

Recently, a Network member called to ask about holding private business owners who declare their property off limits to guns liable for failing to protect customers, as advocated in a gun magazine he reads. Threatening to sue is a popular American tactic but I wonder if it is our most effective approach since it entails much outside our control. Is the threat a paper tiger? Just because we would like to mandate gun carry permissions at private businesses, does the legal remedy exist by which a judge would force a business owner or entity to meet our demands? If not, are we making empty threats?