I think the most fun at the 2014 NRA Meeting was the time spent with five authors who sat in our booth and visited with their fans and autographed books for them to take home. As always, Massad Ayoob was extremely popular, with his supply of books running low extremely quickly. The first day Mas was scheduled for his appearance, I was returning to the booth after a quick errand. Folks were lined up in such numbers that for a moment I wondered if we were close to the booth in which The Gunny was signing autographs.

No, all those NRA members were queued up to talk to Mas, get his autograph and shake his hand.

F+W Media provided complimentary copies of Massad’s new book Gun Safety In The Home, as well as copies of Defensive Revolver Fundamentals which author Grant Cunningham was present to autograph. F+W sent me with copies of my book Concealed Carry for Women, so the ladies were not left out, either. 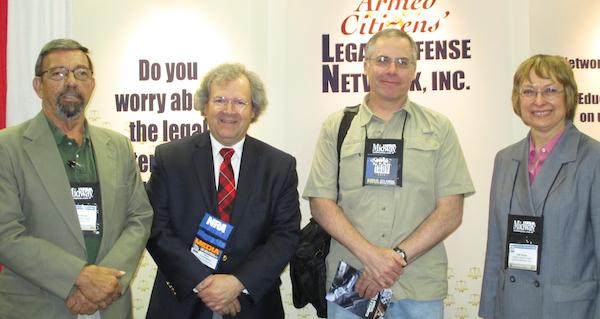 I am so grateful to F+W Media, our publisher Jim Schlender, and his very able assistant Alicia Capetillo, for the wonderful contribution they made to attract people to the Network booth where they were not only able to visit for a little while with authors they like, but also learn about the Network educational efforts and post self-defense incident services for members.

“But wait! There’s more!” Indiana attorney Brian Ciyou put in two stints talking to his friends and signing his book Gun Laws by State, as did popular women’s author Kathy Jackson who signed copies of her book, The Cornered Cat: A Woman’s Guide to Concealed Carry.

It was great fun seeing gun owners of both genders crowd around to talk with their favorite authors and the smiles on their faces as they left with their autographed books.

A big thank you to all who made our outreach at the NRA Annual Meeting so effective. 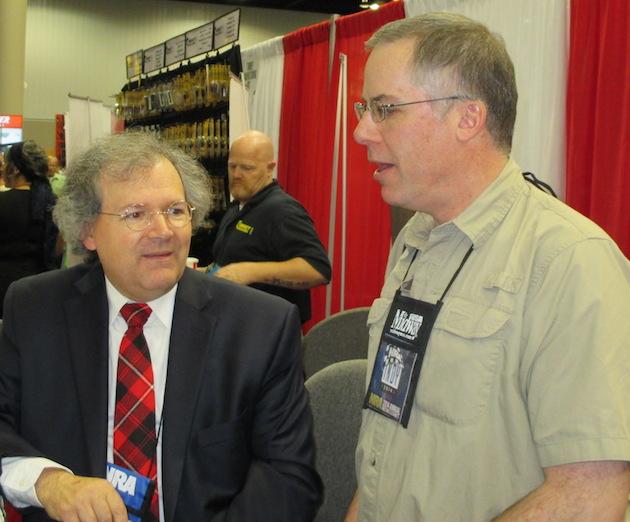 Above: Grant and Jim discuss revolvers.

Below: The Network’s member benefits were described on the booth panels to pique interest among those stopping in for author autographs. 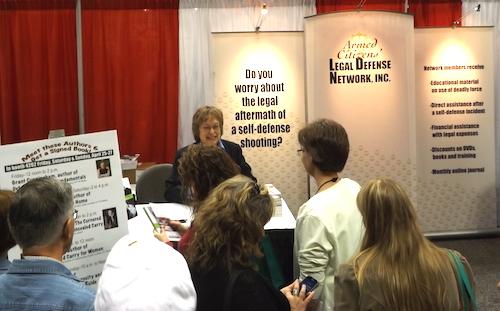 [End of May 2014 eJournal.
Please return next month for our June edition.]