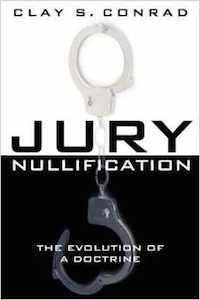 Texas Attorney Clay S. Conrad and the Cato Institute draw back the curtain on jury nullification of the law, a topic about which little is spoken in legal circles. My interest was piqued a few years ago after being advised by an attorney that a defense lawyer opining publicly about jury independence risked irreparably harming his or her ability to effectively defend clients because the courts so strongly oppose independent verdicts. Internet information about jury nullification proved terribly politicized, so I was grateful when I discovered this book and its historical perspective.

Author Clay Conrad starts his book by describing pre-Magna Carta panels called upon to determine the truth of criminal accusations. As English jurisprudence evolved, early juries devised ways to bypass unjust laws. Those early juries refused to convict on violations of unpopular laws against libel, treason and religious freedom. Intrusive government followed the colonists across the ocean, Conrad relates, and in America as early as 1734 the Crown arrested a German immigrant in New York for publishing seditious libel. Andrew Hamilton defended him, arguing, “I know they [jurors] have the right, beyond all dispute, to determine both the law and the fact.”

Nearly three hundred years later, attorneys are still jousting with the courts about whether a jury is empowered only to determine “guilty” or “not guilty” or if it is within their purview to judge the law itself. This question is the repeating theme and common thread woven throughout this entire, lengthy book.

While Conrad has strong opinions, the massive quantity of history, the research citations, and the tales of justice and injustice enacted over three centuries, leaves the reader much from which to draw conclusions.

The question of jury nullification of the law is not without pitfalls. If one defendant is acquitted because their jury does not believe it moral to punish their violation, can the next person charged under the same law expect equal treatment from a different jury? “A pattern of hung juries, nullification acquittals, or ameliorated convictions is a sure sign to the legislature that the law needs to be changed,” Conrad writes. The reader must ask, though, how can we assure equal treatment in the interim? Presenting this argument at length, Conrad retorts that neither enforcement nor prosecution of the law is entirely uniform. “While the discretion of jurors is more and more tightly guided, narrowed, channeled, and directed, the discretion of prosecutors is almost entirely unfettered, with no effective oversight or supervision from any source,” he protests.

The easy answer is to abdicate responsibility for judging the law to the judicial branch, but that does not protect citizen rights. “The founders of this country were in agreement as to the value of the trial by jury as an essential means of preventing oppression by the government,” Conrad urges. Throughout the book he cites cases in which judges outrageously manipulated case outcomes, including an early one in which one judge “told the marshal ‘not to put any of those creatures called Democrats on the jury’.”

Court watchers have become accustomed to judges schooling jurors about the law, often to the extreme that juries are lectured that the judge is their sole resource for law questions, Conrad complains, quoting Clarence Darrow who said, “Most men and women readily approve the great mass of laws that are passed by the legislative bodies. In fact, they are entirely too ready to let others tell them what they must or must not do.”