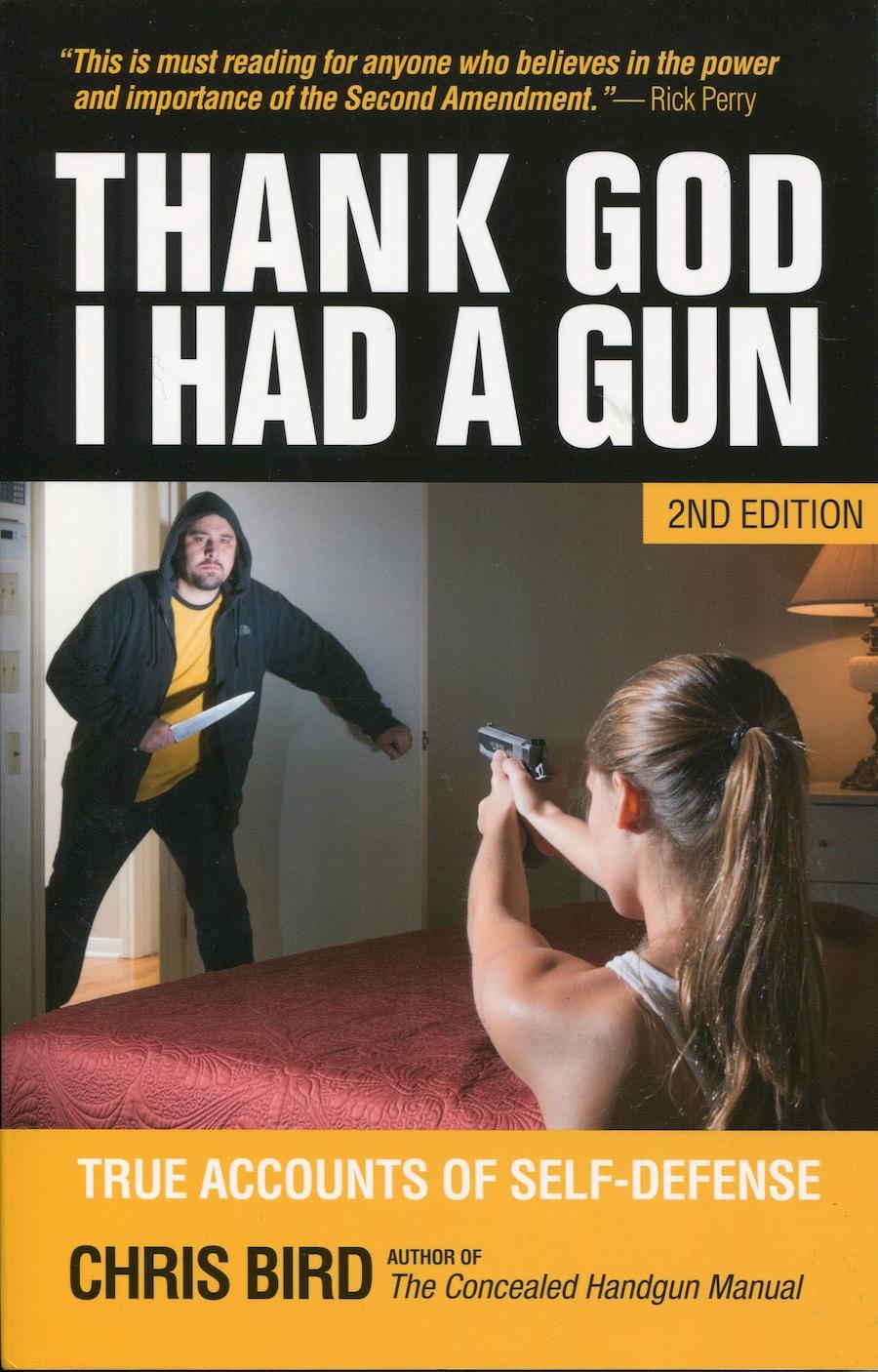 How many times have you heard, “Criminals pick other people, not folks like us.” Oh, really? The seventeen real people who are the focus of the stories in Chris Bird’s book, Thank God I Had a Gun now in its second edition, are not much different than you or me. Not only does this book sound a wake up call for those who rationalize that they are not at risk, it also underscore the importance of personal responsibility for safety since the police simply cannot be present all the time to protect you. You have to be able to stop the violence yourself, as the stories in this book emphasize. A crime reporter by profession but a storyteller by nature, Bird puts a face on each intended victim with his insightful post-incident interviews.

New to the second edition is the story of Vic Stacy, who used his revolver to stop a deranged neighbor who shot and killed a couple and one of their dogs. The story, told largely in Mr. Stacy’s own words, makes it clear he doesn’t want to be a hero for the life-and-death shots he fired on July 29, 2012. Though not formally trained, Mr. Stacy’s experience as a lifetime shooter lent him the skill to make the accurate 57-yard shots that saved the lives of others including a patrolman who had responded to the shooting.

Like the story of Vic Stacy, many will remember the news reports from the other stories Bird relates.

These include reports about Melinda Herman, the GA mom who, sheltering her nine-year old twins, withdrew all the way into a tiny attic crawlspace and shot an intruder who searched until finding them there. Bird also interviewed Sarah McKinley, the recently widowed young mother who had to shoot an intruder. As was true of the GA home intrusion, a lot of Internet speculation followed the McKinley incident. Bird went right to the source, interviewing the young woman, and telling her story in the third chapter of this edition of Thank God I Had a Gun.

Neither woman is stereotypical of the “ordinary armed citizen” one might envision. Although her husband had coached her in how to defend herself and their children at home, Mrs. Herman had gone to a firing range only once to shoot her gun. 18-year old McKinley had a .22 revolver she had fired previously, but was advised that a shotgun through which she had earlier only fired one shot, gave better protection for herself and her infant son. Recognizing that a stalker had targeted her and her remote, rural home, the teen’s brother-in-law loaded the shotgun and left it ready in case she needed it.

It does not appear than Mr. Stacy or either of the women had any formal training in justifiable use of deadly force, relying instead on common sense when assessing the danger they faced. McKinley’s story is particularly poignant. She repeatedly asked police dispatchers if she was allowed to shoot the intruder if he entered her home. Unsure of the legalities, McKinley was terrified that in her panicked state she would not be able to shoot and she and her baby would be harmed. Determination to preserve her child’s life strengthened her resolve.

In Thank God I Had a Gun’s second edition Bird updates the story of defense of property turned dangerous at a family-owned nursery in Ft. Worth. Beset weekly by multiple burglaries, the business owners began sleeping over on the property. In two incidents, about twenty years apart, multiple intruders behaved inexplicably, approaching owners who were visibly armed with shotguns.