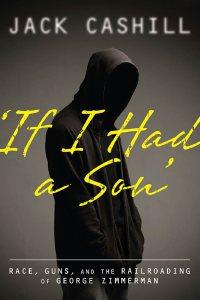 Media bias, racism, and politics are the focus as a controversial author reviews the case many Network members followed with a “there but for the grace of God go I” dread throughout most of 2012 and half of 2013, until on July 13, 2013, George Zimmerman was acquitted of second degree murder charges. Even then, many continued to dissect the case in books, blogs and broadcast media. This book, by conservative commentator Jack Cashill, is an opinionated review of the highly exploited Zimmerman case.

Readers who hope their good intentions can prevail over racial conflict will not enjoy this book. Cashill assigns a lot of blame, often with such venom that readers will be discomfited. That’s unfortunate, because the great value of If I Had a Son is its detailed study of the legal aftermath of shooting in self defense. Whether or not the reader concludes that the civil rights movement has devolved into a power-hungry rabble, the story is instructive about the many pitfalls of self defense’s legal aftermath.

George Zimmerman’s ordeal effectively dispelled the halo effect by which the person acting in self defense is shocked when police, society, and even their neighbors and associates suggest that the acts taken in self defense were murderous. “On the night of February 26, 2012, George Zimmerman left home a hardworking, tax-paying citizen, and a good one at that,” Cashill asserts. By June of that year, he was being treated “with no more respect than the burglars and home invaders that moved him to join the neighborhood watch in the first place.”

The nation wanted badly to believe the best of Zimmerman’s attacker, 17-year-old Trayvon Martin, eagerly harking back to the boy three or four years earlier, before he began manifesting the cumulative effect of lack of punishment for infractions, an absent father, loss of supervision by a devoted step mother whom his father left for another women, discovery of stolen goods unpunished and suspension from school for suspicion of drug possession. The news media eagerly embraced the image of Martin as an innocent young boy, Cashill writes: “In transforming an aspiring gangster into a precious victim, they could avoid all talk of hit-and-miss fatherhood, divorce, parental neglect, cultural breakdown, an exploitive civil rights movement, a corrupt school system, or what George Bush famously called ‘the soft bigotry of low expectations.’” Repeatedly ignoring Zimmerman’s race, broadcasters ranging from Black Entertainment Television to CNN seemed determined to convince America that Trayvon Martin would not have been shot had he not been black.

America at large may have welcomed news from Sanford, FL of arrest and prosecution so Zimmerman’s blame or innocence in the Martin shooting could be sorted out by the criminal justice system. However, “To demand an arrest knowing that a conviction was unlikely suggested motives other than the search for justice,” Cashill asserts, going on to account the benefits reaped by fading stars of the civil rights movement, the deceased’s own mother, the attorney hired by the bereaved parents, and State’s Attorney Angela Corey.

The first half of the book is inflammatory, and not always easy to digest. Persevere, reader, as Cashill is setting the stage for a powerful and informative second half. By the middle of the book, he begins to detail the trial proceedings, often through the eyes of Internet bloggers. Our Network Affiliated Attorney Andrew Branca, who writes on the Legal Insurrection website, is quoted on a number of pages, including direct quotes from his blog posts, and Cashill’s endorsement, “Branca knew the subject as well as anyone anywhere.” Indeed, many of Cashill’s sources are Internet bloggers, primarily the Conservative Treehouse commentators.