Including ... Signs Subject to Misinterpretation • President’s Message • Attorney Question of the Month • DVD Review: Logic of Violence • Networking Column • Editorial • About this Journal


An interview with Massad Ayoob

A few years ago, a prominent firearms school offered their students a yard sign with a message “Nothing in this House is Worth Dying For…” printed over the graphic of a tight shot group on a target along with the school logo. It was a variation on an old theme: over the years, we’d seen a variety of similar messages like, “If You Can Read This, You’re Within Range” with a drawing of a rifle, along with many variations, often sold at gun shows.

The Network has always advocated living below the radar and not drawing attention to the fact that we own guns, if for no other reason than to avoid attracting burglars seeking guns when your home is empty. Beyond this practical advice, there are additional reasons not to advertise your self-defense preparations, as detailed in the Network’s fifth educational DVD, Additional Considerations for Armed Citizens, John Farnam speaks persuasively about what he calls, “the stealth lifestyle.”

Perceptive Network members have to balance this advice against the funny yard signs they were given as gifts or got at the gun show. These members continue to ask, “Why shouldn’t I hang this funny poster in my house or put this sign in my front yard?” They want to know if our advice is based on generalities or if there are cases on record to show that courts, judges and juries misinterpret this kind of humor as proof of bloodthirstiness.

With nearly 40 years experience working as an expert witness in self defense and use of force cases, who better to ask about reasons to avoid this kind of humor than Massad Ayoob? Let’s switch now to our familiar Q & A format, to preserve the clarity of his responses.

eJournal: Can you give us some history that may help us understand the risks from humorous signs and slogans?

Ayoob: In the late 1980s, there was a murder trial involving an attorney who had to shoot and kill someone in his law office. It was self defense, but the moment you shoot somebody the premises become a crime scene. The police photographed every inch of the law office. The office was lined with plaques and awards and diplomas that tracked many achievements of this good man’s life. He had gotten a lot of awards for public service and that sort of thing.

Of all the pictures they took, there was only one that they blew up, put on a giant easel and put in front of the jury. It was a little wood cut of a cowboy with a big bushy mustache and a Colt 1873 Peacemaker and what was engraved on it was, “Gunfighters Don’t Charge by the Bullet.” 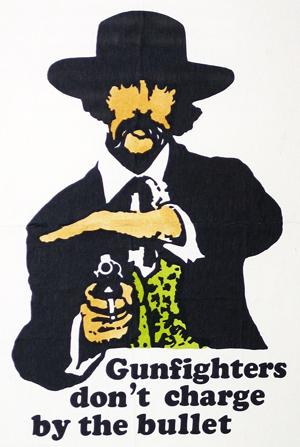 I wound up having to deal with that on cross examination. They were trying to say that it showed that he had an aggressive mentality, that he saw himself as a gunfighter, and that he wanted an excuse to kill somebody. I was asked on the witness stand while being shown the picture, “Mr. Ayoob, gun fighters don’t charge by the bullet. Is that a saying in your business?”