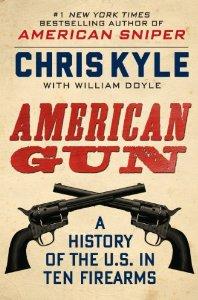 Imagine that you could sit down and chat with an expert in firearms with a vast knowledge in U.S. military history and discuss the impact of a number of firearms and battles in U.S. history. This is the flavor of American Gun, A History of America in 10 Firearms by the late Chris Kyle, a soldier and an experienced tactician.

Chris Kyle was a Navy SEAL with over 160 confirmed kills. After a distinguished military career he entered into the private sector; he decided to write about the impact of his personal selection of important guns on American history.

Unlike many works on the history of firearms, the focus of American Gun is not only the function of the gun, but its effect on military tactics and how those changes and the users changed the course of battles and, thus, history.

Kyle admits from the outset that this is HIS list. Others may differ in their opinion on the value of one gun over another, and may have issues with a gun that was included or guns they might want included.

The presentation is much more conversational than the usual dissertation on chamber pressures and foot-pounds, which, honestly, often puts me to sleep. Instead, these details are presented through the eye of history. Let me give the reader an example–

American Gun starts with Timothy Murphy, a sharpshooter in the Revolutionary War climbing a tree with his Kentucky Rifle to take a shot at a General Simon Fraser of the British Army.

Using Murphy as an example of the Colonists’ tactics, Kyle discusses the formal “set piece” approach to warfare that the British used, in which it just wasn't “proper” to target the officers. In fact, the Colonists' tactics, in general, were just not proper, gentlemanly warfare. We would call it guerrilla warfare today.

Kyle’s description of the Kentucky Rifle helps us to understand its advantages and disadvantages in warfare. It was accurate, but being a flintlock, reload times could be measured in minutes rather than seconds. When you pulled the trigger, you were greeted with a flash from the flash pan, a small puff of smoke followed by a nearly-blinding smoke cloud once the black powder in the main load finally went off. Imagine trying to focus on shot placement when you can’t even see the target until the smoke clears after your shot!

We learn about not only the advantage in accuracy that the rifling gave the American long arms over the British unrifled muskets, but about how that changed American tactics on the battlefield. The British would line up their troops in long rows and fire coordinated shots through their muskets at the opposing troops. Though an individual musket was not particularly accurate, the commanders relied on a curtain of lead from the row of shooters to either do physical damage through bullet strikes or psychological damage through an early form of “shock and awe.” The Americans, though many were armed with muskets, also had the advantage of the long rifle, which could provide aimed, directed shots at single targets. British tactics relied on the officer ranks to direct the troops and firing line. Individual soldiers were discouraged from acting singly; they acted in groups.

Those pesky Americans used some of the British tactics, but also had the sharpshooters who would provide the carefully aimed shots, often aimed at the British officer who was directing the troops.