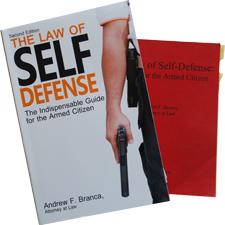 In 1998, Massachusetts attorney Andrew Branca published a first edition of The Law of Self Defense. It wore a simple red paper cover, and its small type detailed the concepts of law and court precedents binding one who uses force in self defense. I learned a lot from that small book and began heartily recommending it in my articles and books. Readers became frustrated, though, when that first edition went out of print, and I was once offered four times the cover price of my copy, which I firmly declined. I’m delighted to note that the 2nd edition is now for sale.

This morning, as I sat down to review the 2nd edition of Branca’s book, I pulled my original copy of The Law of Self Defense off my reference bookshelf. I was amused at how heavily highlighted and bookmarked it is. The 2nd edition is formatted in the comfortable trade-paperback size with more margin room for notes, so readers will have a little more room if they wish to jot notes as they read this authoritative text.

In The Law of Self Defense, 2nd edition, author Branca explains restrictions on use of defensive force, writing “…society doesn’t require any pre-approval before you use force, even deadly force, to protect yourself. You may simply act when it’s necessary. But all that freedom built into the front of the system is more than balanced by a massive and unforgiving evaluation of what you did at the back end. Beginning the moment you use force, and sometimes even the instant you threaten force, the justice system kicks into gear like a massive steam era machine, with monstrous gears and pistons, to evaluate your actions under a microscope and crush you for a misstep.”

Among the “gears and pistons” are police, investigators, prosecutors and juries, each playing a role in which your best interests are not the first concern, Branca outlines. Sure, he acknowledges, we’ve all cheered victims who shot their attackers and were not charged with assault, murder or manslaughter, but that does not necessarily mean that an aggressive prosecutor could not have found issues upon which to file charges.

Are you willing to trust luck that you will be among those not charged if ever you use force in self defense? the author asks. Beyond simple luck, the key, he suggests, is knowing and adhering to the laws concerning self defense and offering a compelling explanation as to why your actions were lawful. Avoid “red flag” issues that attract prosecution like sharks to blood, he adds. In fact, identifying the red flag issues is the book’s raison d’être.

The “red flags” are discussed in a series of chapters focused on critical elements of a persuasive self-defense argument. The first is innocence, and Branca explains how it is lost, be that through aggressive or offensive verbal exchanges, a combination of verbal and physical aggression, or overt physical actions. Protecting your claim of innocence, as well as regaining it after initiating hostilities is also outlined, with key points illustrated by case citations presented as brief stories from real life that drive home the point. Each chapter concludes with a state-by-state summary of applicable statutes and case law. Though reasonably conversant with the black letter law regarding use of force in self defense in my own state, I appreciated the exposure Branca’s book gave to pattern jury instruction citations and to pertinent rulings.

Now may be as good a time as any to talk price: Branca’s 243-page book may be among the most costly paperbacks you ever buy. Suggested retail is $49.95, but it is sold online for $39.95 and by entering the coupon code LOSD2-ACLDN at http://lawofselfdefense.com/buy-now/ you’ll get free shipping and an additional $10 discount, courtesy of Andrew Branca. The book’s value is something like the old joke about the man who complained that his attorney charged him $50 to write a letter to a deadbeat debtor. The attorney agreed to redo the bill and modified the charges as $5 to write the letter and $45 to know what to say in the letter. While the joke is old, the principle applies. Even at full retail, the value of Branca’s book is not in the number of pages nor its binding; its value is in the way it concisely teaches the reader principles of self-defense law.