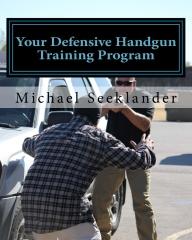 This month’s review highlights Mike Seeklander’s defensive handgun book, so we can learn more from this popular instructor through the printed word. You’ve already “met” this author through the lead article in this month’s journal, now let’s consider his instructional concepts.

As Seeklander noted in our interview, a question he strives to answer for students as they leave class is, “How can I continue to train?” Answering this question is the focus of his book, Your Defensive Handgun Training Program. He takes teaching defensive handgun skills as seriously as he did his position as lead firearms instructor for the Federal Air Marshal academy, where the loss of life should his instruction prove inadequate was exponentially greater than for one armed citizen defending his or her family, yet the stakes are no less dear for either.

Chapter one starts with a discussion of differences between shooting for defense and championship-level competitive shooting. Though the differences may seem profound, Seeklander notes that, “The common denominator that I am really passionate about is performance. Performance, ‘on demand’ (without warning), is the common goal of both the professional warrior and competitive athlete. Each seeks the same thing and will only find it one way, by training correctly.”

Seeklander explains that although it seems that shooting instructors are a dime a dozen, outside of Olympic-level athletics, shooting coaches are non-existent. “In arguably the hardest sports to master, there are no coaches,” he exclaims. A coach differs from an instructor in that he or she participates throughout the long-term skill development process, he adds.

Conversely, firearms instructors are generally in contact with their students for a few days after which they part company, sometimes forever, expecting that the student has learned enough to maintain the skills they were taught. “Then it is up to the student to forge his own path to success or failure,” Seeklander writes. He presents Your Defensive Handgun Training Program as a bridge between traditional firearms instruction and the kind of coaching that supports top level athletics.

Many books have been written on self-defense firearms skills, but Seeklander believes they lack “actionable information,” a deficit he promises to cure in Your Defensive Handgun Training Program. “I guarantee that if you follow my program you will indeed train yourself to a high level of preparation,” he promises. Reviewing the synopses of the book’s chapters reveals a very ambitious program.

Introducing the processes of skill and knowledge acquisition, Seeklander explains the physiological method through which repetition improves “neurological and cognitive ability to process information and fire our muscles (by nerve impulses).” The chapter goes on to identify key elements of successful training, including precise execution of skills, regular practice, measurable improvement and modifying technique to avoid stagnation, among others.

From the beginning, Seeklander urges beginners to obtain hands-on instruction, and in the chapter about setting training objectives, he adds “you will have to possess some knowledge about the skills you are trying to acquire,” in order to establish the desired standard of performance. This goes hand in hand with his earlier admonition to practice only correct skill execution, since overwriting a habit requires more than twice the repetitions that engrained the initial habit.

Because little to no action occurs without mental inputs, Seeklander proposes that successfully using a firearm is 100 percent mental. He gives special emphasis to preparation to use lethal force and notes that with these preparations entrained, the act of pulling the trigger is a nearly automated response when you face a deadly force attack. Mental toughness and a “never quit” philosophy are critical, he continues, and offers recommendations on honing the survivor mindset.