Knowing that, I would not want to rely upon a Florida public defender if I was charged with murder after a self-defense shooting.

I suspect by now you likely know where my train of thought is going, and you’d be right if you guessed that I’m setting the stage to explain how we at the Network strive to attain the goal of providing a Cadillac defense–not just a Taurus defense–for our members who justifiably use deadly force in self defense.

Now for the good news: Network members have this type of defense available to them. 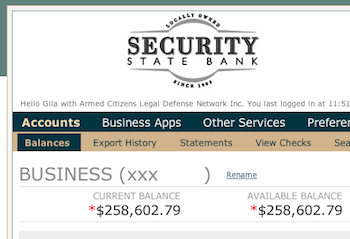 I am pleased to announce our Legal Defense Fund has reached a milestone, acquiring a balance over $250,000.

My goal has always been to have a half a million dollars in the Fund, so in a worst-case scenario we could help fund several Cadillac defenses for our members, so we have at least two or three years before we reach the half-million milestone. Still, for now, it is very comforting to have a quarter-million dollar balance.

Before I close, I want to update you on a case on which I began commenting periodically in May of 2012. George Zimmerman has recently decided to pass up the opportunity to have the judge in his case decide if there was sufficient evidence to dismiss the charges against him, electing instead to simply prepare for a June trial. I think this was a wise move.

Based on what I see from afar, with this judge the cards are stacked against George Zimmerman and his defense team is going to have to fight for every bit of justice they can muster.

Apparently, in Florida it is very costly to put on a Cadillac defense and it appears the defense has used up all the money donated for Zimmerman’s legal expenses, just preparing for trial. That is unfortunate, and so I would like to suggest that any of our members who feel Zimmerman was justified and is being railroaded–by the way, I fall within this category–donate to Zimmerman’s defense fund. I just made another donation. Please consider joining me by contributing at http://www.gzdefensefund.com/donate/.

You can read more at the Zimmerman defense website http://www.gzlegalcase.com/.