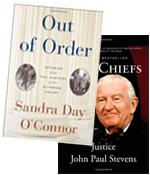 Have you ever wondered to what extent Supreme Court Justices are more than lingering echoes of a President’s ideals, influential long after the man in the Oval Office passes from power? Recently, in reading books by two retired Justices, Sandra Day O’Connor’s small book, Out of Order and John Paul Stevens’ Five Chiefs, I found the biographical and historical vignettes showed to a surprising extent that Justices are not necessarily their President’s puppets. These books are decidedly different, yet each puts a human face on some of the most quietly powerful decision-makers to guide our nation.

Justice O’Connor’s Court history contrasts her memories of serving on the Court with its history. The Supreme Court was established to “guard against the overreaching and excesses of the political branches,” O’Connor explains. Nonetheless, the President nominates Justices whom the Senate must approve. Once on the court, however, modern-day justices remain in place to wield power for life.

This she contrasts with the Court’s surprisingly “modest and uncertain” beginning, when Justices presided over trials on a circuit, and could later rule on the same case if the decision was appealed to the Supreme Court! No path to ease and wealth, the demands on early Justices sometimes lacked dignity, were physically demanding, and it was not unusual for early nominees to decline the nomination or serve briefly then go on to a better job.

Though a pleasant and entertaining book, Sandra Day O’Connor’s Out of Order left me wanting more. Intrigued by viewing the Court through the eyes of a retired Justice, I next read Justice John Paul Stevens’ memoir, Five Chiefs: A Supreme Court Memoir. Stevens’ book details his interactions with the various Justices and Chief Justices with whom he served during his 35 years on the Court. With so many Justices sitting for life, their enduring influence far exceeds the Presidents who appointed them, as Stevens points out, noting that in the history of the court, 17 Chief Justices led the Court (16 if you don’t count Rutledge, appointed while the Senate was in recess and never confirmed, though he served in the position for five months), during a time span in which 43 Presidents were in office.

Stevens explains that the Justices’ life appointments “ensure their impartiality and independence.” Whether or not this is true for all Justices, it certainly is hard to accuse Chief Justice Warren Berger of looking out for the interests of President Nixon, who nominated him. Berger was the Justice who, among other landmark opinions, wrote the one requiring Nixon to hand over recordings leading to his departure from the White House. Freedom from seeking election insulates the Justices from pandering to public whim, and Stevens explains, “In our democracy, issues of policy are determined by majority vote; it is the business of the legislators and executives to be popular. But in litigation, judges have an overriding duty to be impartial and to be indifferent to popularity.” He criticizes the campaigning for election judges who are not appointed undertake.