eJournal: I’ve heard of lengthy 9-1-1 recordings used in court against a shooter. It seems we have competing concerns: leaving the line open to relay vital information between the scene and responding officers, weighed against inaccurately answering questions. How do you balance the two?

Ayoob: I would say, “Ma’am, I don’t have time to discuss it now. We have an active danger scene here. I will remain on the line.”

eJournal: And now, with that line open and presumably making an audio recording of anything yet to transpire, isn’t that recording cause for concern? 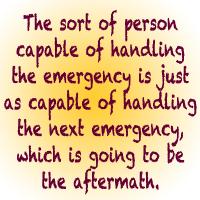 Ayoob: The whole thing causes me concern! It is never going to be perfect the way we would like or the way a scriptwriter would like. We are going to be multi-tasking. We have tremendous dangers of a mistaken identity situation. I do not want to be distracted.

eJournal: Do you think all of those and other dangers counterbalance leaving the phone connection open? What if the fight resumes and the armed citizen screams, “If you get up, I’m going to kill you, you evil *&%#!”

Ayoob: Anyone stupid enough to do that belongs in prison anyway so it all serves justice. Anybody who thinks they are that unable to control themselves probably shouldn’t be carrying a gun to begin with.

eJournal: You’ve summed up one of the puzzles that are mentioned when people argue about whether they should talk to police at all after an incident. That argument claims we’re so stupid that we can’t manage the aftermath.

Ayoob: It is a hypocritical self-contradiction. The assumption is that you were the cool, brave warrior sheepdog who was able to beat a professional criminal at his own game, but now suddenly, your brains are going to turn into a steaming pile of feces. It simply does not work that way. The sort of person capable of handling the emergency is just as capable of handling the next emergency, which is going to be the aftermath.

Ayoob: Simply the self discipline that you are going to watch the scene. You are still in danger until it has been determined otherwise. I would have the gun holstered by now, hand near or on the holstered weapon, so if the officer approaches me suddenly or yells, “Drop the gun!” I can say, “Officer, I’m slowly raising my empty hands now.” You might want to put the cell phone in a breast pocket. While that may muffle the sound a little, it would leave the other hand free.

eJournal: Then when you put up your hands, they really are empty, not holding something dark colored.

Ayoob: And you won’t be shot for holding a cell phone that looked like a weapon in the dark.

eJournal: Could we examine the extreme opposite and discuss advice to not call 9-1-1 at all? Instead of conjecture, it would be great to have some actual examples from which we could learn. Can you think of examples of people who did not call after a use of force incident and how did that work out for them?