Also, limit your time at the exchange. The less time on site, the less time you are exposed to any problems. Besides, the activity you have planned for tonight started three minutes ago and you have to get going. “Too bad, so sad…no fight tonight…bye.”

Maybe handling the pickups and drop-offs on a “make it up as you go” plan isn’t going to work. If needed, a court can impose police-enforceable orders on both parties as to the location, time and manner in which these events are undertaken. If you think you might need restraining orders or things of that nature, then it’s time to talk to your attorney or someone in your local courthouse’s family violence office. Nobody wants court or government interference if they can avoid it, but sometimes it’s better than the alternative of handling it yourself.


If you have any of these issues ongoing, be aware of them and if possible, clean them up to the best of your ability. Yes, some of it may cost money, but it will be money well spent, giving you peace of mind knowing that it’s taken care of, not to mention knowing that you’ve taken a step to insure that if you do end up in a use of force situation, you have as many loose ends tied off as possible.

As a last note: Several times above I’ve mentioned calling the police and restraining orders. It’s very common that people who are interested in self protection view those ideas with great scorn and derision–and standing alone, those feelings aren’t unwarranted because pieces of paper by themselves don’t protect you.

However, the police and the courts who will be adjudicating your situation after it happens expect people to go through the procedures the law establishes for managing potentially violent situations.

Calls to 911, police reports and restraining orders: these steps and others are those which society through the legislature and courts expect you to avail yourself of. The use of force against another person is an extreme event and considered a last resort. 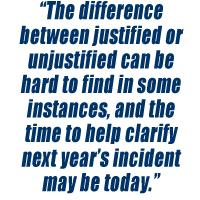 Merely because people feel that the steps that precede physical action are ineffective does not invalidate them or make them any less necessary. They are tools to be used as appropriate, either to give the authorities more ability to act such as in the case of having someone who is “merely trespassing” arrested for violating a restraining order (hopefully negating an incident “this time” by the arrest) or for laying the groundwork to show why a use of force was the only reasonable action someone could take at a time in the future. The difference between justified or unjustified can be hard to find in some instances, and the time to help clarify next year’s incident may be today.

Too many people assume, “A good shoot is going to be a good shoot,” then get hit from an unexpected direction. Life isn’t simple. The aftermath of a use of force situation isn’t simple, either.

[End of September 2012 eJournal.
Please return next month for our October edition.]