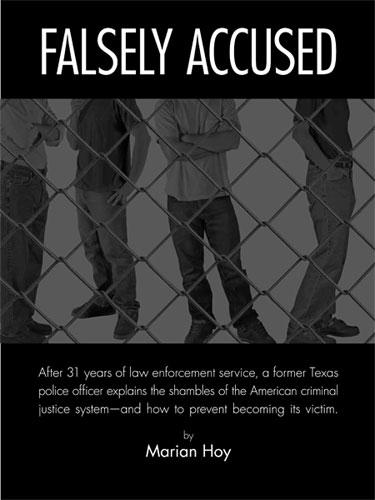 Reviewed by Gila Hayes
I’ve read several books on prosecutorial misconduct in years past, and was disappointed when all focused on abuses at the Federal level. It seems to me that the armed citizen has far more to fear locally. This spring, some of what I’d been looking for was published electronically by retired police officer, Marian Hoy, in her book about the problem of false accusations at the local level.

Why does the subject concern us? In Hoy’s words, citizens should “Care, because the next person a peace officer erroneously arrests could be your son or daughter, or your husband, childhood friend or you…care, because when you are jailed, your life as you knew it will unalterably change.” Citing the Innocence Project’s wins (http://www.innocenceproject.org), which she says stands at more than 300 inmates “proven innocent and exonerated,” Hoy shows that miscarriages of justice really do occur. Falsely Accused does not discuss many specific cases, addressing instead why and how police accuse and prosecutors convict innocent citizens.

Overworked police departments encourage taking short cuts, and the details that might reveal who really committed the crime are never investigated, Hoy explains, writing, “The urgent and essential sense of necessity that pushes an officer to solve a case also blurs the means and the results he uses.” She details how hard it is to admit to a mistake and release a suspect once police realize their error. “Once dishonorable peace officers and prosecutors target a person as being the guilty suspect they rarely will admit their mistake, because they believe that admitting that they are wrong is a threat to their effectiveness as an officer and prosecutor,” she accuses.

Hoy describes the many stresses that can turn an idealistic officer into a sloppy, uninspired one, who turns in incomplete investigations, with the result that the responsible criminal may never be identified while an innocent person is punished.

Facts go unverified, scientific findings are disregarded or twisted to support the arresting officer’s conclusions, evidence is ignored and phone calls or in-person interviews are never made.

By comparison, Hoy writes, “A thorough investigation requires patience, skill, intelligence and a desire to present true and complete investigations.”

Hoy’s “insider’s” view of interrogations is important to anyone believing that just doing the right thing is enough to keep them out of jail. She describes procedures used to extract confessions. “Many innocent persons have confessed to a crime which they did not commit just to escape the constant haranguing of the interrogator. We all say that we would never admit to something we didn’t do, but when one is sitting in a tiny room at a police station for 6-10 hours, with two men you don’t know, and of whom you are scared to death, who have told you no less than a thousand times that they know you did it – you will admit to anything! Many, many innocent persons have spent years in prison because of overzealous, battering, and bullying peace officers who were convinced of the person’s guilt.”

No citizen should be interrogated without an attorney present, Hoy continues. She cites the rights outlined in the Miranda warning, affirmed by the 1986 Supreme Court ruling in Michigan v. Jackson (475 U.S. 625 [1986]), but notes that the following year another case, which she does not identify, “stated when a person requests an attorney to be present the police interviewer can continue asking questions until the attorney arrives.” She advises, “If it were me, I would simply tell the officer, ‘You can ask all the question[s] you want, but I will not answer until my attorney arrives.’”

Hoy despairs for poorer defendants relying on court-appointed counsel, and she writes of attorneys sleeping during trial, being disbarred shortly after finishing a death penalty case, failing to investigate alibis or get experts to weigh in on forensic issues and missing important hearings. While we hope this is a worst-case scenario, it shows the importance of the Network’s member benefit of financial assistance to provide a skilled and aggressive attorney.

“If an arrested person has financial means and can afford even a moderately good attorney – the chances of him spending time in prison are little or none.