Including ... Tom Givens on Armed Defense Skill Priorities • President's Message • Letter to the Editor  •  In George Zimmerman’s Own Words • Attorney Question of the Month • Book Review • Networking Column • Editorial • About this Journal

Network Advisory Board member Tom Givens is rightfully among the top firearms trainers in the nation and his classes in Memphis, TN could not be needed more by the residents of one of America’s most violent metropolitan areas. Givens spent 25 years in law enforcement and specialized security work, with duties ranging from investigations to street patrol to training, then in 1996, became owner/operator of Rangemaster in Memphis (http://www.rangemaster.com/).

As an instructor, Givens may well hold the record for most private citizen students involved in self-defense incidents. It is testament to the efficacy of his training that a very high percentage prevailed, many telling Givens their story afterwards, from which he has fine-tuned his training to give others the benefit of hard experience.

Givens periodically teaches instructor development programs and at the end of one such event, we had the opportunity to interview him. We’ll switch now to Q&A format, in hopes of preserving some of the tone and humor of this outstanding instructor.

eJournal: What do you think are the top three skill deficits or shooter errors you see in practitioners of defensive pistol craft? What are the cures or solutions?

The first one is mindset. Even people who carry a gun spend a great deal of time trying to convince themselves that violent crime will never happen to them. I think that is the biggest mistake that people make. It’s not just an assumption, but almost a religious fervor when they say, “I don’t work in bad neighborhoods, I don’t do drugs, I don’t go out late at night, and I don’t do this and I don’t do that, and so this will never happen to me!”

“It will never happen to me” is probably the most dangerous phrase you could ever utter! 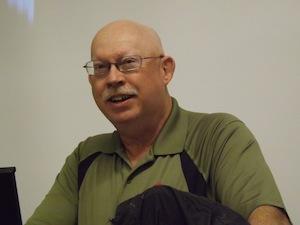 Above: Givens is an engaging public speaker, mixing large quantities of information with a seasoning of humor.

It sets your mind up for frozen-up inaction when it does actually come, because you spent so much time, so much mental energy, trying to convince yourself that it won’t happen. When it does then you are stuck in a denial loop where you can do absolutely nothing about it in the time frame that is allotted.

Now, violent crime happens very quickly and there is not a lot of time to stand around and try to get past “I can’t believe this is actually happening to me” and then actually get moving. In the time it takes to say “I can’t believe this is happening to me” you’ve just wasted a second and a half of your response time and then you do not have a whole lot of time left. These things do not go on for minutes; they are over in seconds for the most part, so you have got to start moving.

When you watch surveillance camera video of assaults, they happen very quickly. The person is there, and BOOM! They do what they want to do. Their goal is to get to you, get what they want from you, and get away from you, without getting caught or injured.

For a long time, my job involved talking to crime victims, interviewing them, trying to figure out what happened, so we could find who did it.