I would also explore with this police trainer, or perhaps another if necessary, police officers competing in matches similar to competitions I shoot. In fact, many officers likely compete in the very same matches as I do. 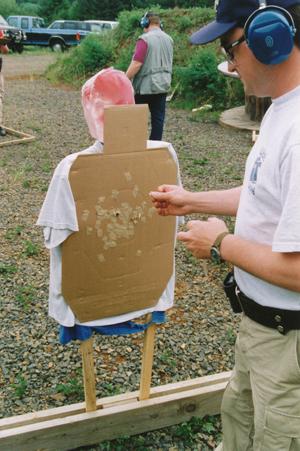 At the last State Championship, I was introduced to an FBI agent who was also a competitor. How cool is that? Could I get one of these officers to come to court and testify on my behalf? Likely so.

I would then call to court my personal firearms trainer or trainers, to explain to the jury how and why I was trained in a manner and methodology similar to police. (Photo at right shows the plastic torso form marketed as Tactical Teds to which targets can be attached to analyze the shooter’s hits. The same type of target is illustrated in the next column, as Rob Pincus shoots the RangeMaster match mentioned later in the President's Message.)

Remember, that most people on a jury will hold police officers in a high regard, and if you can honestly align yourself with your local law enforcement officers, it may be to your advantage. You would likely already be calling your own firearms instructor to court to explain the legal principles you were taught, perhaps the concept of disparity of force, or any number of other issues that might come up at trial. It is important to understand that if you don’t have trainers ready to come and testify on your behalf, you are lacking a critical part of your legal defense.

If participating in “combat pistol matches” was being used in court to paint me as some crazed Rambo type who enjoys the fantasy of killing scores of people, I would call as an expert one of the individuals who founded the shooting endeavors in which I participate. For IDPA, it would be one of the original board of directors, as mentioned above. If USPSA, I would call one of the early participants in the sport, to give a history lesson about how and why the sport of IPSC competition was formed. 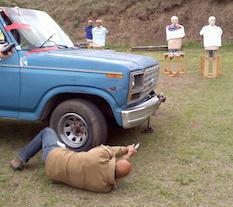 Lastly, for my defense, I would call myself to the witness stand. That’s kind of a joke; I would not handle my own legal defense pro se! Instead, I’d have at least two top attorneys on my legal team. On the stand, along with explaining for the jury the reasons why I felt it necessary to use deadly force to protect myself or others, I would be ready to explain that I participate in these competitions in order to be best able to fulfill my responsibilities to myself and others I would be protecting, along with society in general. That means being the best, most competent armed citizen I can be. I would explain how many, many years ago, I decided to make sure that if I was ever forced to use deadly force in defense of myself or others, I wanted to be as skilled as possible, to minimize any risk to the general public. That’s why I compete and will continue to compete as long as I carry a gun.

[End of this article.
Please enjoy the next article in this eJournal.]