Take for example, sky diving. Before going up in an airplane, the skydiver practices pulling the rip cord of his parachute many times. He also practices finding and pulling the ripcord of the back-up ‘chute, too. Airline and fighter pilots practice handle critical incidents in the flight simulator many times before being allowed the responsibilities of transporting airline passengers or engaging in air-combat. They want to have the emergency plan foremost in their minds so they can concentrate on life saving actions. Shooting for self defense is not that different. 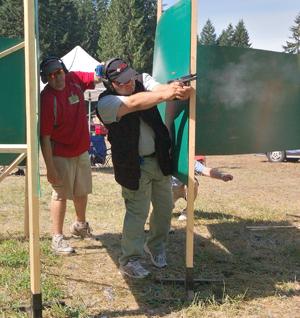 If a person’s last 1,000 shots have been fired at stationary targets, double tapping a reasonably large A-zone target area, while standing as still as if stakes had been driven into the ground through their feet, then if they need to fire in self defense, they will likely remain stationary, ignore movement and fire two shots.

In fact, it is fun to watch matches where people who have conditioned themselves to fire two shots each time they see a target, try not to shoot twice when told to shoot each target one time. (Note to IDPA stage designers: Start designing stages requiring something other than two shots per target, okay?) Of course, this is but one example. There are others.

In an IDPA match exposing half your upper torso when using cover is perfectly fine but in the real world that can get you killed. (In the above photo, Network Affiliated Attorney Brian Hallaq is shooting in an IDPA State Championship Match, but still takes care to remain as far behind cover as he can while shooting a match stage.) Even worse is not being required to use cover at all, even if it is available, as is often true at a USPSA match.

I run an IDPA club in Washington State, where most of the shooters are my former students and that set-up is the norm. Under this scheme, you will likely NOT be as competitive as you could be, if you “played the game” a little. By that, I mean using larger guns (which are easier to shoot well) and holsters that are made of plastic and are easy to draw from. And frankly, I have no issues with that, as long as the equipment is reasonably similar, and by practicing and shooting at a match, you are not forming bad habits for carry.

I routinely switch gun types for competition and carry, but when I do, I make a complete switch. For years, I shot and carried Glocks exclusively: on duty, for teaching, to carry off duty, and for competition. The manner of carry was virtually identical, even to the position of the Glock on the duty belt being comparable to the position on my belt for concealed carry. Because I practiced speed reloading much more often wearing concealed carry gear, on duty I positioned my extra magazines behind the hip, where I knew I would look for them first if ever needed. Thankfully, they weren’t needed.

A few years ago, I made a switch to 1911s, and then I shot that gun platform for about four years. Last year, I shot revolvers exclusively, and this year, I am back to the 1911s. That way, when I reach for a gun whether it is the stress of a match or the stress of an armed confrontation, I will be familiar with the weapon system and will not be worried about forgetting the 1911’s safety, or during last year, managing the long double action trigger pull of the revolver.

So far, we have discussed two of the three issues–competition and how it relates to self defense. But, what about the legal considerations? Are there any to worry about?