COMPETITION AND SELF DEFENSE

First, we need to define “competition.” For the sake of this discussion, we’ll confine ourselves to the “practical pistol” venues of the United States Practical Pistol Association (called IPSC at its formation; now known as USPSA) and that of the International Defensive Pistol Association (IDPA). Both these organizations were founded by self-defense advocates. Lt. Colonel Jeff Cooper of Gunsite fame was the driving force behind IPSC competitions and the organization’s first president. IDPA got its start when Bill Wilson, Ken Hackathorn, John Sayle, Dick Thomas, Larry Vickers and Walt Rauch put their heads together back in the mid-nineties. 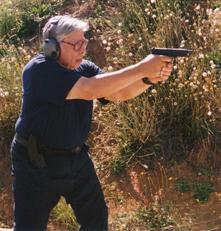 Before either of these preeminent competitions became famous, my friend and mentor, the late, great Jim Cirillo was a force to be reckoned with in the PPC circles in the 1970s, and as late as 1997, he was actively competing in IDPA. Likewise many of the top instructors in the country routinely took part in competition. Massad Ayoob, Chuck Taylor and Ray Chapman participated in early IPSC competitions, and Ayoob is still an active and winning IDPA competitor. To a man, each of these great trainers will tell you that competition will absolutely NOT hurt you, as long as what you are doing is not counter-productive to good technique and self-defense tactics.

When he was a member of the NYPD Stake Out Unit, Cirillo was adamant that he wanted other competition shooters backing him up on the felony stake outs. He wrote in his book Guns, Bullets and Gunfights that he would ask potential recruits for the Stake Out Unit twelve questions. The first three were: “Are you a competitive shooter?” “Have you competed in major matches and placed and won awards?” “Can you perform well under pressure or fear?”

Cirillo (shown in the photo to the left) knew, the biggest benefit to shooting competition is the ability to practice your defensive handgunning skills under stress. Of course, this supposes that one has defensive handgunning skills to begin with! Most people start out at the lowest class, either D class in USPSA or Marksman class in IDPA. But with a little practice on the fundamentals and dedication to improvement, someone serious about improving their skills will quickly move up in class. Of course, a little formal training doesn’t hurt either.

Becoming a top pistol shot does wonders for your confidence. If you have to face intruders in your home some night, knowing you have the ability to handle the physical aspects (shooting skills) of the encounter, leaves decision making and tactical decisions to be handled in the forefront of your thought process, and that is a comforting thing.

Having written eleven hundred words singing the praises of shooting competition, there are some drawbacks and I would be remiss if I didn’t point them out. The first huge drawback, and the most critical in my viewpoint, is the temptation to train only to win matches. You need to get some self defense/tactical shooting instruction, and need to practice that skill set along with shooting competition. It is a long known phenomenon that a person who is placed under extreme stress (like a life threatening encounter) will revert to the comfort level of their past experiences or recent training.