Competition, Self Defense and the Law

I shot my first competition in 1978. The match was a police pistol competition (PPC), an NRA-sponsored event at the Spokane (WA) Police Academy. I was a new police officer at the time with only a minimum of firearms training. Fresh out of a reserve police academy, I had recently been hired at a small North Idaho town. Once on the job, I queried the chief (the department was only me and the chief) about firearms training. He gave me that blank administrator’s stare (the one which indicates that you have just been labeled a trouble maker) and told me our small department didn’t have a firearms training program. But he did offer to take me to the city dump and shoot cans. Seriously. And we did. 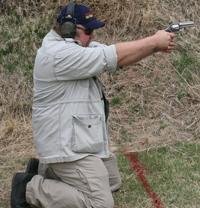 Shortly thereafter, I found out about PPC competition, and decided it was in my best interest to go and check out the matches. After all, the police firearms training I received in the reserve academy was patterned after PPC competition. So, off I went with my duty belt complete with a Ruger Security Six revolver. I came in last in the match, but I accomplished my goal of shooting above 70%, which was the qualifying standard in most police departments. Liability was not foremost in my mind; I simply wanted to be able to survive a career in law enforcement and figured it would be wise to be the best pistol shot I could be. Even though I came in dead last, that one competition whetted my appetite for more. Seeing those other guys shooting the X-ring out of the targets made me realize that I could learn a whole lot about shooting for blood by shooting at paper.

Fast-forward through two job changes and many more competitions to the year 1987. I had just finished up a two-year stint working at the Hanford Nuclear Reservation as a Security Inspector and a member of their traveling pistol team. The year after I left, they actually won the PPC National Championship. Alas, I was not on the team at the time, but I still took pride in their effort.

In the winter of 1987, I took my first job in the private sector as a firearms instructor at a Seattle-area indoor gun range, parlaying my police competition resumé and police firearms instructor status into a private sector job. By then, I was deeply into the gun culture, and had heard of such exotic training schools as Gunsite and the Lethal Force Institute. I wanted to join that exclusive club. I had also heard and read about IPSC combat pistol matches, which were a huge deviation from PPC. I correctly figured that “practical shooting” would soon eclipse PPC shooting as the number one shooting sport for self-defense practitioners, so I hung up my PPC guns, bought a Glock and started shooting IPSC in the Seattle area. Meanwhile, I was starting to make my bones as a civilian firearms instructor. One could correctly conclude that I gained at least some of my credibility as an instructor due to my success as a competition shooter.

Today, I estimate I have competed in over 300 pistol matches (and a few rifle/shotgun matches) several of them at the national championship level. I have also taught firearms for self defense for 24 years, and have worked as an expert witness in the field for about 20 years. In 2007, I completed my law degree. I hope this trip down memory lane allows the reader to decide if I have some credibility in this area, the area of competition, self defense and the law.

This is a three-pronged topic that leads with two initial concerns. First, will competition help, or will it hurt the armed citizen as it pertains to the actual use of deadly force in self defense? Let’s explore.