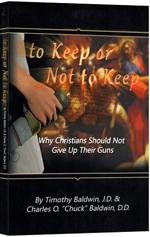 To Keep or Not to Keep:
Why Christians Should Not Give Up Their Guns

I like to study familiar arguments reworded by proponents and opponents from various backgrounds. I always learn when familiar concepts are portrayed through different illustrations, different rationales and different verbiage. This was the case recently when a Montana attorney sent me a copy of a newly released book he authored with his father, To Keep or Not to Keep: Why Christians Should Not Give Up Their Guns. I appreciated this exploration, because few things disturb the self-defense practitioner more than directives from their church condemning use of force in self defense. Is the church leadership wrong?

Scriptures corroborating the Christian right to self defense go well beyond the oft-quoted words in Luke 22:36, “he that has no sword, let him sell his garment, and buy one,” as the authors of this book bear out. The elder of the writing team is a prominent pastor, but the younger is a practicing attorney, and his influence is clearly seen as he presents evidence of self-defense rights using concepts like the burden and standard of proof, natural laws and rights, due process, and doctrines of necessity and proportionality.

To Keep or Not to Keep’s footnotes constitute a substantial resource with 38 pages of small type replete with quotations and additional citations pointing the serious reader to further authoritative arguments on the topic. The footnotes help the reader follow the book’s thesis and add weight to the authors’ views. Both combine to form an unassailable statement that God blesses the defense of innocents, whether accomplished by an individual (Abraham using force to rescue Lot) or by a nation, shown by criticism of Jews who would not fight on the Sabbath to defend innocent citizens against Pompeian raiders who attacked with impunity because they knew of the 4th Commandment.

Continuing the argument, the authors cite Scripture to emphasize the Christian duty to protect the innocent. They explain that if an assailant dies, the person acting to defend innocent life is not culpable for the bloodshed. Preservation of innocent life is paramount, the Baldwins assert, citing verses recognizing the natural right to sustain life, including the right to obtain and eat food and the right to fend off injurious or life-threatening attack.

Scripture admonishing the individual to submit to government can raise questions about opposing gun laws. Should guns be declared illegal, how can one comply with Scripture dictating obedience to government, as per Romans 13:1 or Titus 3:1? “Scriptures support man’s right to keep and bear arms; and as such, Christians must not give up necessary and proportional means of self defense,” the Baldwins write. They later explain that biblical admonitions to obey government do not apply in cases where a tyrant’s laws create injustice, hardship and death. “Man must oppose any law that takes away the natural right and means of self-defense,” they assert. A later chapter defines the right to possess battle rifles comparable to those the government employs against the citizen and here they quote the Founding Fathers.