This month’s book and DVD review follows up on a page appended to our Attorney Question of the Month in the May edition of this journal, highlighting websites and blogs authored by our Network Affiliated Attorneys. Several of our affiliated attorneys are also authors of books, usually explaining their state’s weapons and concealed carry laws. We received an outstanding example of this kind of work from our Missouri affiliated attorney, Kevin Jamison.

Though the focus of this DVD is on Missouri law, Jamison comments on travel, reciprocity (Missouri licenses are widely recognized), Federal laws like the gun free school zone restrictions and the law about carrying in National Parks, the Post Office restriction and how to challenge it (offered with the trademark Jamison humor), as well as other generalities that go considerably beyond laws of the Show Me state. For example, he explains how a state-issued concealed carry license is not recognized on Indian reservations, by virtue of the fact that the reservations are independent nations.

His discussion on traveling with guns–both by automobile, train and airplane–is also interesting and useful. Likewise, he gives a useful segment on interacting with police when carrying a concealed weapon, when stopped for a traffic infraction.

Jamison is a skilled lecturer, using props when germane to the topic under discussion, including lock boxes, and amusingly, a pistol-mounted bayonet (you’ll need to watch the lecture to see how that fits in!). 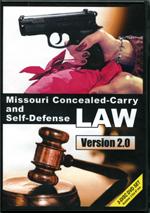 In the second disk of the longer, enhanced version of Missouri  Concealed-Carry  and Self-Defense Law, Jamison’s explanation of justifiable use of force concepts is widely applicable outside of Missouri, though he occasionally cites the Missouri state law. What circumstances allow use of deadly force in self defense? Jamison gives a good lecture that illustrates these vital principles, while defining reasonable fear, fleeing felons, going on to discuss survival tactics, post incident management and other important details. Naturally, we appreciated his mention of the Network’s assistance to its members.

Jamison’s lecture provides an interesting segment on the need for gun owners to behave to the highest possible standard of politeness, despite the fact that carrying a gun is entirely legal. Attorneys work hard to get people out of trouble, he explains, adding that good manners keep people out of trouble. His advice includes what should happen if your concealed weapon accidentally flashes into public view, and how to calm hoplophobes, complete with interesting examples. Here Jamison lets his inner thespian come out to good result, but also with an appropriate seriousness, wrapping up an engaging lecture with a powerful closing argument about the value of armed citizens in society.

Presented as a classroom lecture, Jamison spices up Missouri  Concealed-Carry  and Self-Defense Law with gentle humor. For example, outlining the reasons the Missouri authorities might deny an application for a license to carry a concealed handgun, and describing the law dealing with mental health issues, Jamison quips, “You have to be crazy enough for a judge to notice and given the amount of crazy they see every day, that is a reasonably high standard.”