During most of September, my reading time was spent with a lengthy book on mass shooting attacks that focused on survival strategies for citizens of varied training, skills and physical ability. Owing to its broad approach to the subject, I found Survive A Shooting offered a compendium of strategies, some more useful than others. The author’s approach results in a lengthy book, parts of which will not be applicable to all readers, but I found a detailed and thoughtful reading worth the time required. It teaches survival tools for friends and relatives for whom we care who cannot or will not carry guns as well as response options for armed citizens. 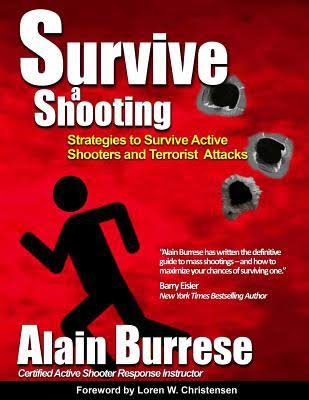 In Survive A Shooting’s introductory pages, Burrese writes that his goal is to provide “practical and applicable advice” so ordinary laypersons can develop strategies and skills to survive a mass shooting. “You can’t afford to turn your safety and security over to somebody else,” he stresses. Since police can’t be present the moment a spree killing attack starts, citizens on the scene are the first line of defense.

First, Burrese stresses, mass casualty attacks are not a new phenomenon as the 24-hour news cycle suggests. “One of the deadliest mass murders at a school in the United States happened on May 18, 1927, in Bath Township, Michigan,” he writes, accounting the deaths and injuries caused by that bombing. A chronological list of spree killings follows, through which he highlights factors often missed in post-incident reports. Many attackers herd their victims into killing zones through explosions, smoke or fire alarms, while others block exit doors to prevent escape. He accounts, “Statistics show active shooter incidents average 12 minutes in duration and during this time, on average, a person is shot every 15 seconds…and 60 percent end prior to arrival of law enforcement personnel.”
Citing research from numerous studies and resources Burrese outlines characteristics that associates of the murderer may note before a mass killing. One lengthy list includes factors like suicidal talk and talk of putting one’s affairs in order, expressions of empathy for violent criminals, letting personal grooming and hygiene go, absenteeism, emotional instability, impulsivity and a host of other factors spree shooters have exhibited prior to attacks.

Survive A Shooting then shifts focus to prevention. Burrese asserts that many spree killers have signaled their intent before “they commit their atrocious acts. These signs range from certain behaviors, telling a certain friend or peer, and even publicly posting plans on social media websites,” and he relates how one parent alerted law enforcement in time to prevent a mass shooting. “Pre-attack detection happens more than many realize and more often than reported by the media,” he stresses.

Timely reporting and treating such reports seriously are essential, he continues. In discussing the factors constituting genuine indicators of pending trouble, he quotes Andy Brown’s Warnings Unheeded and Left of Bang by Patrick Van Horne and Jason A. Riley, both books reviewed in this journal in years past.

In addition, Burrese quotes Israeli security expert Garret Machine, who identifies behaviors and factors intended victims may observe before a mass killing attack. These include inappropriate clothing for the season or venue, nervous fidgeting and pacing, profuse sweating despite a comfortable temperature, refusing to make eye contact, checking a watch or cell phone frequently, appearing to be dazed or in a trance, carrying inappropriate items like a “suitcase at a park, a large electronic device in a movie theater, or a child’s backpack on an adult who is unaccompanied by a child.”

This segment of the book contains numerous lists of indicators, which is frankly too much information to put to use, were it not for the author’s quote from Left of Bang’s Combat Rule of Three: “When you observe three anomalies or indicators, you must make a decision. Do not wait for more information.”

Survive a Shooting next addresses physiological and psychological detriments that impede productive responses during an attack. Seeing the threat, orienting oneself in relationship to it and deciding what to do takes time. Training and experience reduce delays before making and acting on a decision, Burrese explains. Delays are caused by disbelief that an attack is happening, and even once acknowledged it takes time to determine how many attackers are present, where they are and whether they are standing still or moving, their appearance, weapons, and where and how many victims are present. The killer executes the same “decision making cycle,” he notes, but it is shorter, because the attacker has already decided to kill people and sometimes has preselected specific people. Derail or delay this advantage by a distractionary counter attack, he teaches.

Burrese quotes General Patton’s admonition to his troops, “Instead of waiting to see what might develop, attack constantly, vigorously, and viciously. If you’re standing around trying to figure out what is happening or what the enemy is up to, you are making one hell of a good target out of yourself and your men. Never let up. Never stop. Always attack. When the enemy is defending himself against your assault, he doesn’t have the time to plan an offensive against you,” likewise the shooting survivor must move and seize the initiative.

Stress reactions impede quick responses, Burrese continues, explaining the relationship between denial, surprise, and stress to life threatening danger. In addition to diminished fine motor control, hearing and vision changes, temporary paralysis is frequently linked to high heart rates occurring under stress. “When the adrenaline rush hits, and the first thing that happens to people is their breathing gets very constricted, causing their brain and body to go into adrenal activation. [Bill Kipp] says that those that can breathe well in this state will be able to continue to control the adrenaline and can actually bring the neocortex back online. Those that do not will experience the amygdala hijack and lose control, which at the far of the spectrum is ‘freeze.’” He closes this segment with instruction on four-count combat breathing, determination to survive, specific techniques for awareness not only of threats, but of entrances and exits, cover and concealment and potential weapons. “You should be very hard to surprise,” he concludes.

After a lengthy review of various mass shooter response plans, Burrese exclaims that “hiding and hoping is not a plan for survival,” so introduces his prioritization of escape, deny, attack back–all focused on the urgency to get moving. “The worst thing you can do in an active shooter situation is to stand or sit there and do nothing. Movement saves lives. Freezing in confusion, fear, and shock is a likely response, especially with people that don’t have a plan and have no training,” he teaches.

He details improvised weapons, barriers to deny access, groups of intended victims swarming the attacker, and more than anything else, acting without hesitation. “Speed comes from having a plan and knowing simple go-to defensive moves that you can default to under stress and the adrenaline dump. It also comes from being fully committed, without hesitation, once you’ve determined attacking back is the course of action to save you and others,” he teaches.

In Survive a Shooting Alain Burrese quotes extensively from dozens of sources. The comparative citations make for slow reading with a lot of repetition. This book is not intended as infotainment, so don’t complain if you got it and were not sufficiently entertained. Instead, I suggest you jot down a list of ideas you hadn’t fully cemented before that you can use to stay safe if you’re swept up in a mass shooting. Here are a few items from my list: