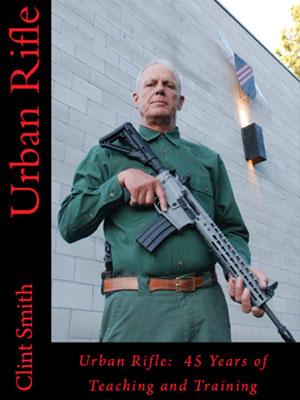 It has been years since I’ve been able to take a class from Clint Smith, so I was really pleased to discover his book on rifles for defense. Introducing the topic, Smith observes that the convenience of handguns, plus an American history of carrying them, blinds us to their limits. He adds, “If we all truly understood the role of a handgun in the chain of fighting tools we would all be more aware of just how poor a choice it is; hence the rifle.” He cites the devastation Platt and Maddox wrecked in Miami in 1986, the Hollywood bank robbery in 1997, and Christopher Dorner’s 2013 rampage through Southern CA as illustrations of why a rifle is so desirable when a quick stop to hostilities is required.

The skills of using a rifle in a fight are the same whether the need arises in war, in law enforcement or in a citizen’s home, Smith opines. “Some would have you believe there is a different style or technique of using the rifle for each occupation. There is not. A fight is a fight— behind a squad car, a sand dune or inside a doorway in your home. Let there be no misunderstanding, even in today’s world with its need to be ‘politically correct,’ the ultimate goal in a fight is to win.” he emphasizes.

To that goal, the rifle brings the advantages of “a distinct increase in power and terminal effectiveness on the target, an increased magazine capacity (to reduce manipulation, not to ‘spray’ the target), and a longer sight radius for precise aiming,” Smith accounts. Its disadvantages are common to all firearms, he continues, citing “the rifle’s need for manipulation, reloading, leading with the muzzle in tactical applications and retention.” Practice and train so you can “fire from an effective platform, manipulate, load, clear and keep the weapon in service quickly,” he advises.

Commenting that too many rifle classes ignore the distances at which one is most likely to need a rifle, Smith observes, “The overwhelming majority of rifle fights take place at common handgun ranges,” zero to 100 yards. Hitting at any distance relies on shooting fundamentals, but people want to get right to the “fast and fancy” training, when instead a thorough mastery of the basics is what is needed, he urges.

The next chapter teaches the elements of “aim, hold and squeeze,” followed by efficiently loading, reloading, and clearing stoppages, to which Smith urges the reader to apply the concept of “smooth is fast.” The longer taken to do any of those tasks, the longer the shooter is a target. “You’re either shooting back with solid hits, or you’re a target. It’s as simple as that,” he stresses.

Smith outlines key elements to accurate rifle shooting and adds breathing, follow through, trigger control, stillness and natural point of aim based on skeletal support for consistency. Firing positions, he explains, reflect the paradox between optimum stance and good cover. He comments, “We know that the shot fired is only as good as the platform it comes from, so the dilemma is how to get the best platform with the least amount of exposure.” He illustrates and discusses standing, prone, kneeling, sitting, squatting, as well as positions to defend against gun grabs and moving toward the threat to retrieve an injured person. That’s all in Chapter 9 and it is an intensely packed 13 pages.

Practice rifle manipulation from a variety of positions “every time you go to the range,” Smith advises, explaining, “people shoot you because they see you. They see you because you let them. Don’t let them see you!” Using cover means the rifle may get dirty, “If you get down or use cover, and you should, you subject the rifle to the elements, which can cause stoppages. Dirt and debris may clog up the action,” he warns.

In a later chapter about malfunctions, Smith comments, “I am amazed at all of the rifles that I have seen that don’t work. It’s even more amazing that anyone would own a rifle that doesn’t work well and all of the time! I would always take a bolt-action rifle that always worked over a semi-automatic that worked sometimes.” Failing to clean the gun, using bad magazines or bad ammo, compiling a rifle from parts of other rifles, and mistakes by the operator are common causes. He illustrates clearing failures to fire, double feeds, and throughout keeping the rifle at the shoulder as much as possible, keeping the muzzle between you and the threat.

Smith was among the first big-name firearms instructors to have students moving during shooting drills. “If you watch cop dash cams in gunfights it looks like lots of people move around in gunfights!” he points out. “Learning to shoot and move is not always an easy skill to grasp. It is an acquired skill based on repetition and diligent practice,” he urges.

Smith opens a chapter on rifle carry methods with his well-known observation that a sling is to a rifle as a holster is to a handgun. Rifle carry techniques are important, he stresses, because “you will always carry a rifle more than you will shoot it.” He illustrates cross body carry, strong side and opposite side carry. He next discusses carrying the unslung rifle when quick use may be required, but is not presently underway. “The position of the muzzle is not based on technique, it is based on environment,” he emphasizes.

“Is the muzzle in a place where it can support you in a fight? If you are not in a fight or danger, sling the rifle. If there is a chance there is going to be a fight, or you fear for your safety, then unsling the rifle, put the butt on your shoulder, and keep the muzzle between you and whatever it is you don’t like or threatens your safety.” He outlines muzzle directions for climbing or descending stairs, rounding corners and more.

When the topic moves to transitioning from rifle to handgun, Smith explains that very close proximity to the threat is key to deciding not to reload, clear a jam or escape instead of drawing a pistol. Sling use leads the chapter that follows, entitled Support Equipment, in which he identifies common rifle accessories and his opinion of their value. Bipods, retention straps, ammunition are all discussed with no wasted words, so the reader knows what Smith favors and why.

A chapter on rifle sights and optics includes Smith’s use of the larger of the two-aperture Colt-style sights for a wider view of the fight. That preference is even stronger when lighting is limited, he writes later. Of optics, he observes, “The first thing to remember is that scopes do not help you shoot better, they only help you see better,” although he acknowledges that both are important. Powered optics, mounts, lasers, flashlights, night sights and even home alterations to improve sight visibility conclude this chapter.

Low light training is essential, too. Smith again stresses in the chapter Night Firing Techniques, “Most rifle fights take place inside what could be considered pistol range. Rifle shooters will probably be moving to find cover, out of the line of fire, or to get better target acquisition. Threats may be moving for the same reasons. The fight won’t be what you want it to be. It could be dark, quick and ugly,” he warns.

He outlines modified sighting methods to accommodate close-in fights in poor lighting, as well as use of lights. Of flashlight use, he warns that painting the threat in light may impede their sight, but certainly not their trigger finger. A similar warning is issued later about muzzle flash. This chapter shows weapon-mounted lights, identifies and illustrates various techniques for using conventional flashlights with rifles, and points out that learning the various options is valuable because use of cover mandates that no single method will work well.

Two chapters cover shooting from behind cover or concealment, followed by a chapter discussing target indicators that draw an assailant’s attention. While we’re often taught to be aware of threats, this chapter teaches, “The key is your personal awareness of your target indicators that will help reduce your individual projection of these target indicators to your opponent” while applying the same knowledge to gain control over the threat. Be alert to sound, movement, reflection or shine, contrast, outline and smell, he writes. The next chapter outlines use of camouflage, and these practical suggestions are a lot more than face paint or Mossy Oak® or RealTree® shirts and trousers.

As I finished the last pages of Urban Rifle, I realized that by necessity too much of my reading lately has been aftermath related. I genuinely enjoyed “renewing acquaintances” with Clint Smith through the written word, and the instruction he provides in Urban Rifle is worth far more than the cost of the book. If you own a rifle, get this book and study it.