Several members have asked what is going on with our legal battle with the Washington State Insurance Commissioner (OIC). For new members not familiar with this fight, for well over a year, we have been countering arguments from the OIC that the Network’s assistance to members constitutes insurance and that we are subject to that agency’s regulation. Because the Network has never had an insurance component, we have, of course, argued vigorously that their charges were groundless. Undeterred, in the spring the OIC imposed a cease and desist order prohibiting enrollment of Washingtonian (this only affects Washington State), although renewals of existing members are allowed. That, in a nutshell, is the situation.

For a couple of months at least, we have been in a sensitive phase of the battle, and while it is not over as of this writing–and we do not expect it to be over any time soon–I figured it was time to update everyone. (Including of course, anyone reading this from the Office of the Insurance Commissioner!)

First off, we are waiting for a ruling from the Presiding Officer, who is an employee of the Office of Insurance Commissioner (OIC) who has been appointed to preside over our appeal. She has issued two rulings so far, the first one denying our motion for a stay of the cease and desist order, which we chose not to appeal, and the second motion being a final order on both our motion for summary judgment and the OIC motion for summary judgment. To no one’s surprise, she also ruled in favor of her employer. We have filed a motion for reconsideration, believing her ruling to be illogical. Let me explain.

She has found our program to be insurance, because she has determined that we pay money to cover legal and bail costs upon the occurrence of a determinable contingency. Interestingly, she actually agreed with us that self defense is an intentional act, not a contingent act, but, in order to find in favor of her employer, she proffered the argument that while the act of self defense may not be a contingent act, the circumstances which lead up to a person making a voluntary decision to use force in self-defense were the contingent act. By the way, all this is public record, and for those who would like to follow the entire argument, I will post the link at the end of my narrative here.

Here is how the OIC’s presiding officer framed it:

We have filed a motion for reconsideration, pointing out to her the “reasonable belief” aspect of self-defense law. One does not have to be attacked to use force in self defense, but instead, simply have a “reasonable belief” that an attack is occurring.

Secondly, in order for our benefits to be considered insurance (according to WA Law, RCW 48.01.040) “Insurance is a contract whereby one undertakes to indemnify another or pay a specific amount upon determinable contingencies.” The word determinable is a modifier to the word contingency and means the ability to be determined. If a reasonable belief is the contingent act, then how does one (ahead of time), determine what that reasonable belief will be?

That is the question before the OIC’s Presiding Officer in our motion for reconsideration, and we should know soon what her answer to that question is.

If we are not happy with the ruling on our motion for reconsideration, we can then finally appeal the ruling to a superior court, where an independent judge will review the record and decide if the insurance commissioner employee was correct in her ruling.  This will of course take another several months I suspect, so when I said that we were in this for the long haul, you can see I meant it.

Now you are up to date regarding our fight. If you want to read all the bloody filings of the case, go the insurance commissioner website, make a pot of coffee (one cup will not do it) and read away. Here is the link for the filings: https://www.insurance.wa.gov/hearings/armed-citizens-legal-defense-network-inc.

Hail to the Chief!

Thank-you President Trump for following through on your promise to appoint Supreme Court justices who will interpret laws taking into account the intent of the writers of the US Constitution. With this promise, he has now appointed three justices who, it is likely, will be strong pro-gun votes on the court, joining Alito, Thomas and Chief Justice Robert in a strong majority. We can expect to see some 2nd Amendment cases heard, with the likelihood of strengthening the rulings the Court has previously issued, Heller and McDonald cases. It was a pleasure to listen and watch Justice Amy Coney Barrett parry and joust with the Senate Judiciary Committee members during her confirmation hearings. What an intellect! This appointment is, so far, just about the only positive event to occur in 2020. I think we will all be happy to bring in 2021.

I am pleased to announce that active Network membership is now over 19,000. That is great! Thank-you to all the new people who have joined, of equal importance, thank you to all the people who have remained members over the years. I know other companies boast membership numbers up in the hundreds of thousands, but I doubt if those companies are any happier than we are. With the increase in numbers, our Legal Defense Fund is over 2.5 million dollars, which is also the highest that has been. (Not a coincidence!) 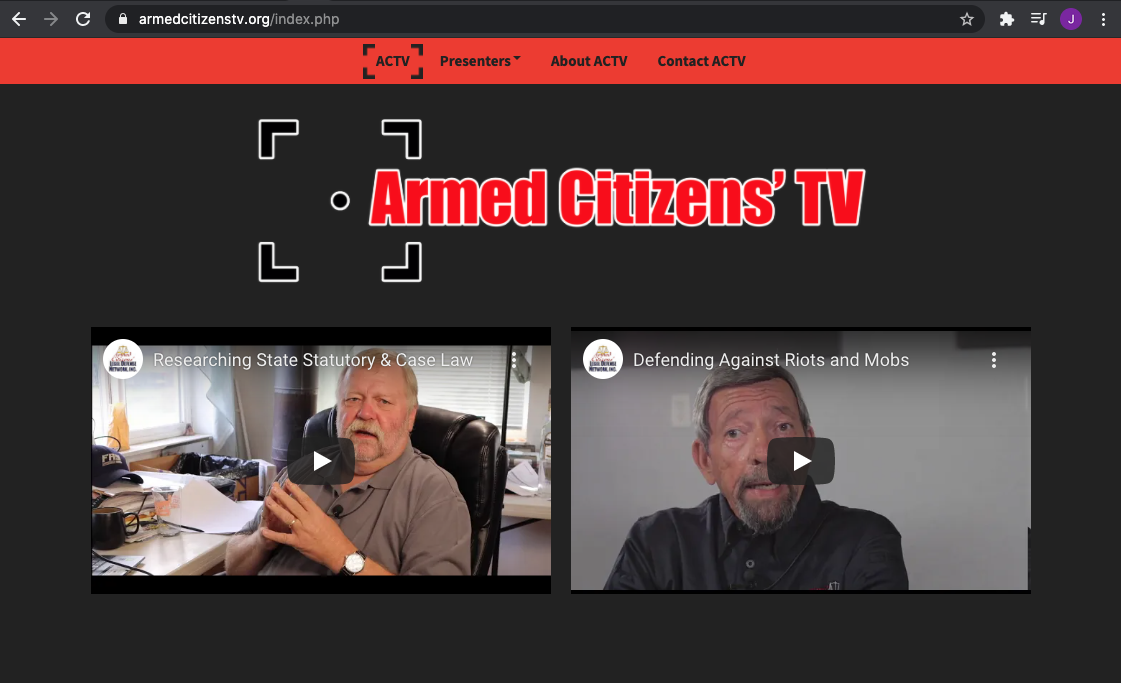 Recently, we made the decision to start making YouTube videos and getting them out for the education of millions of gun owners in the U.S. We have a Massad Ayoob video on defending yourself during a mob/riot situation, and I recently filmed on how to search your own case-law and statutory law. We’re just getting started, but in light of the current unrest, Massad’s video is turning out to be very popular. View it and my recent addition to the video library at https://armedcitizenstv.org.

Our friends at Gun Digest Magazine recently approached me to write a monthly column regarding the legalities surrounding the incidents of self defense you see in the press. I have written one column so far (that should be out in the next issue of Gun Digest), and I will continue to write more articles addressing self defense issues you see in the news. With that in mind, I am approaching a deadline for that next column, so I will sign off for now and get busy.